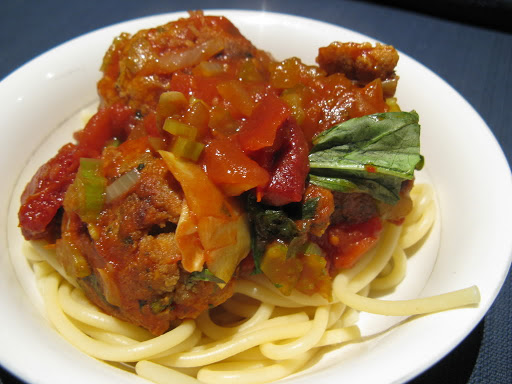 Cindy and I have been quite taken with our soy bombs - we've made and enjoyed the repeatedly. Each time, Cindy has made some muttered comment about using the soy bombs as meatballs in a spaghetti 'n' meatball style dish. We decided it was worth giving the idea a crack, and Cindy drummed up this bolognese recipe from More to Love Vegan. Cindy's a little overwhelmed with work at the moment, so I took on the cooking duties - my first attempt at making these little balls myself. Just to complicate things, I decided to find out whether these bombs would work baked as well as fried.

I won't run through the whole recipe again - we've blogged it before here. Basically I followed all the steps up until the frying, and baked them in a preheated (180 degree) oven instead of plopping them in the frypan. They probably had about half an hour all up, with numerous stops to rotate them about. Baking them probably leaves you with slightly drier bombs than frying does, but you're also saving yourself a decent amount of oil. It's your choice really.

Then it was time for the bolognese - I followed Buttons' directions to the letter - only substituting some chilli flakes for the fresh chillies she'd used (and dropping the tempeh of course - its place being taken here by the soy bombs). It's a pretty great sauce recipe - the sun-dried tomato, chilli and artichokes fight it out for flavour dominance, but they end up sharing themselves around in a delicious taste compromise. All that was left to do was some speedily-boiled spaghetti and we were good to go. Pour the bolognese over the soy bombs (or delicately submerge them in the sauce, depending on how many pots you want to use), and scoop them up onto a pile of spaghetti. Gold!
Posted by Michael at 11:00 am