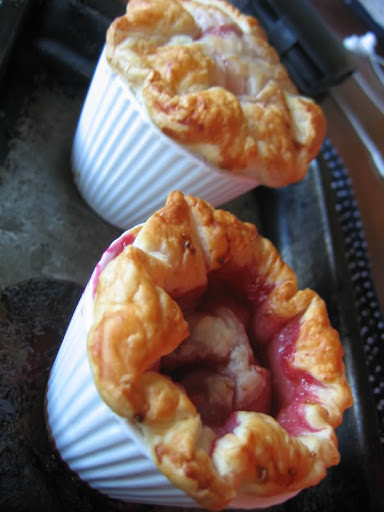 During their three weeks in our home, Emma and Simon had clearly noticed our food blogging habit. We were photographing food at home, photographing food out and about, then spending hours reviewing our pictures, tapping away on the computer and talking about 'the Amateur Gourmet' and 'Mellie from Tummy Rumbles' as if they were either personal friends or fêted celebrities. Thus, on their departure, Emma and Simon generously presented us with a wireless router and a set of six ramekins! Now we can blog from anywhere in the house (I think: we haven't gone so far as testing it out in the bathroom) and I can make all those cute little single-serve puddings and cakes in tempted.
On Thursday night I tested out two of the ramekins for the first time. After a holiday hiatus, Veronica Mars was back on American television and we had a new episode to watch. (Legal note: where's the beef? does not condone dowloading of copyrighted material unless your local free-to-air station is shunting your favourite program from timeslot to timeslot, with months between screenings.) 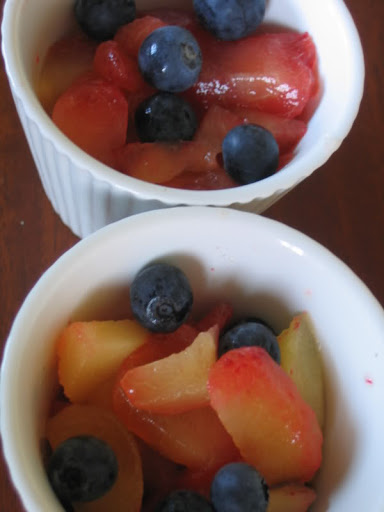 This warranted a lazy night in: catching up on the previous weeks-old episode with egg and 'bacon' sandwiches washed down with cider, followed by an all-new ep and dessert. Dessert was a fridge-leftovers concoction, starting with two plums each, sliced into chunks, and a sprinkling of blueberries.
Into each ramekin I then stirred about half a teaspoon of rasberry jam. With a spare half-sheet of puff pastry from the freezer I made pie tops, pressing them firmly around the edge and cutting air holes around the centre. As an experiment, I brushed the pastry with some more jam, thinned with a bit of hot water. 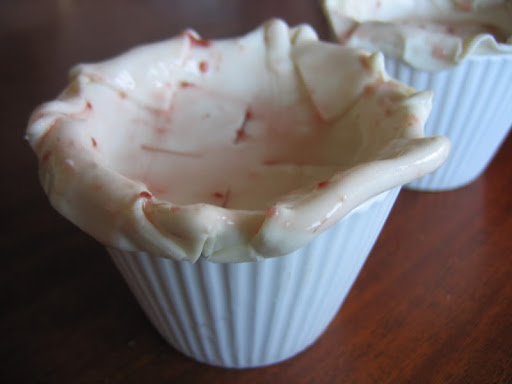 Then into a 180 degree oven for about 20 minutes!
As you can see from the first picture, one of the pies puffed up high, while the other got a bit water-logged with the fruit liquid. Michael likes to mush up his pastry in the fruit and actually preferred the latter one. I, on the other hand, like my pastry golden and flaky. To achieve this I think you need to leave a bit of an air pocket between the fruit and the pastry, and this is quite feasible with relatively tall, narrow containers such as these. It's a problem that I haven't completely solved for larger, multi-serve pies. 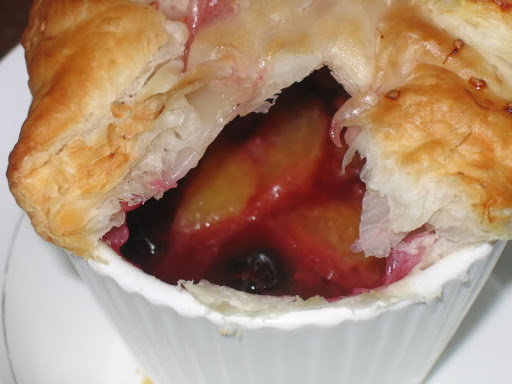 The fruit centre was piping hot, a bit too sweet and very liquidy. The jam was probably an unnecessary addition, and the extra effort of stewing the super-juicy plums to evaporate some of the liquid would have yielded a better filling. But we both loved the pastry and these were a pretty satisfying accompaniment to an hour of crime-solving, partying and romantic intrigue at the college with the highest enrolment of slim attractive students in America.
Posted by Cindy at 5:43 pm