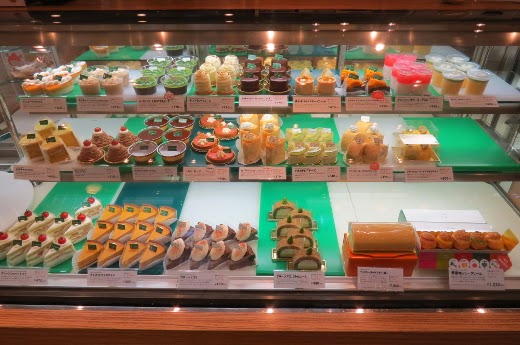 Our morning in Kamimeguro was wet and bookended with food failures. First, Michael navigated us towards vegetarian cafe Rainbow Bird Rendezvous for an early lunch. The only word we could read from the hand-written sign on the door was 'Wednesday', but it was pretty clear that they were closed especially for that day, a Wednesday. Later we circled the suburb twice trying to locate Potager Marche before confirming that it had been replaced by a barbecue restaurant. In between, there was a warm dry refuge and cake at Patisserie Potager. 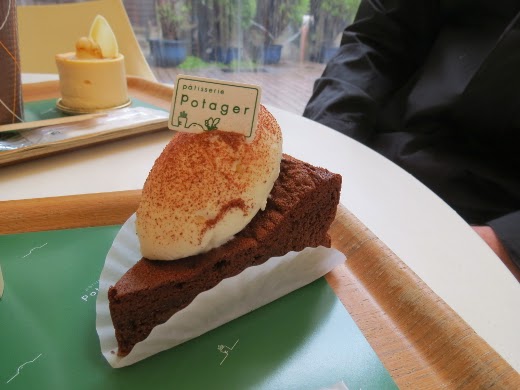 We visited Patisserie Potager last year, and I was keen to try more of their pretty vegetable-charged desserts. The burdock gateau chocolat (470 円 ~ $4.90) was a little dry in the crumb but balanced out with a cream dollop. Tiny cubes of roasted burdock added texture and only the subtlest flavour to the cake. 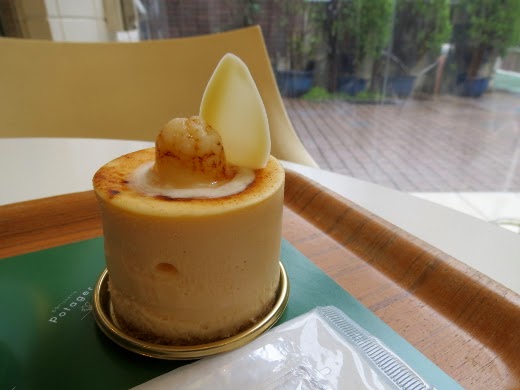 
For all the frustration around it, I'm so glad we were able to return to Patisserie Potager. These vegetable-based desserts might be a silly novelty, but they're also damn delicious.


You can read about our first visit to Patisserie Potager here. Since then it has received mostly positive write-ups on A traveling foodie's gastronomic diary from around the world... and 도쿄 동경 베쯔니 블로그 (in Korean).
____________


Accessibility: Entry is flat from the street and tables are moderately spaced. All the cakes are displayed at a low-to-medium height. I ordered and paid at a high counter. We didn't visit the toilets.
Posted by Cindy at 8:32 am