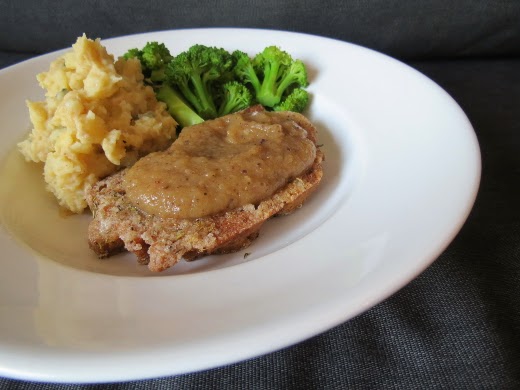 I was so taken by the chops from Bryant Terry's recipe that I immediately started scheming about a crisper, less gravy-drenched way to enjoy them. I hit on apple sauce, which triggered vague associations with suburban USAmerican home cooking. While pork and apple have long gone together, a bit of googling suggests that pork chops and apple sauce are a Brady Brunch-era trend; actually I'm more familiar with them from The Simpsons.


I took inspiration from a couple of online recipes, most notably this one on Epicurious, and made use of some apple puree in the pantry. The process is almost embarrassingly simple, and with this particularly good batch of seitan, the results were impressive. The chops were lightly seasoned and golden crusted, but held their moisture and tasted tender.


On the side, Michael prepared blanched broccoli and Bryant Terry's slightly more effortful and always delectable mashed potatoes. Neither of us feel major nostalgia for meat-and-three-veg meals, but this one might enter our regular repertoire regardless.


Seitan chops with apple sauce
(inspired by an Epicurious recipe
... and a third-hand experience of USAmerican cuisine)


In a small bowl, stir together the arrowroot, salt, pepper, thyme, rosemary and garlic powder. Dredge each seitan chop through the seasoned flour to lightly coat it all over. Heat the oil in a frypan and fry the dredged chops on both sides until golden.


To make the sauce, heat all the ingredients together in a small saucepan. When it's time to serve, place one chop on each plate. Remove the bay leaf from the sauce and spoon the sauce over the seitan chops.
Posted by Cindy at 9:56 pm