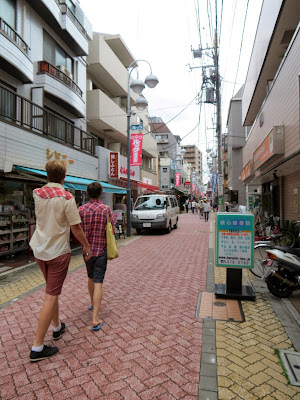 We hit our first full day in Tokyo without having really done much in the way of planning. Luckily, Matt was on the case and had our day pretty well mapped out. We started with a wander around Nakemuguro, browsing through a few shops and wending our way towards Potager Marche, a vegetable focused deli. They sell fruit and veggies, pre-made veggie meals and snacks and have a lunch set for people who want to eat in. 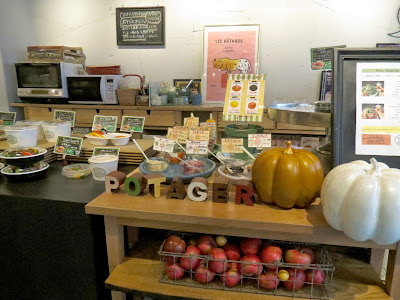 The lunch set is 1290円 (AU$13.50) and involves a little cup of soup, a bread stick, fresh leafy salad, your choice of three sides and a freshly squeezed veggie juice. The sides were the most interesting - there were pickled veggies, a couple of different kinds of mock meat, a gratin and so on. Everything was fresh and tasty - it felt like a good healthy start to our Tokyo eating. 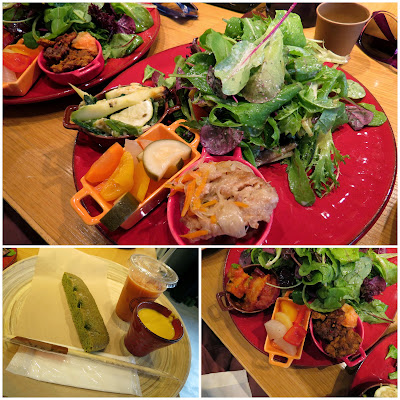 We followed up with a visit to their nearby sister establishment, Patisserie Potager, a sweets shop with an intriguing focus on vegetables - everything has a vegetable component, so there's pumpkin and corn-based treats, radish jelly and a whole range of other odd-sounding desserts. I had a white asparagus souffle (470 円 ~ $4.90), while Cindy went for the passionfruit and yellow capsicum jelly with yoghurt mousse (470 円 ~ $4.90). Both were excellent, although the capsicum in Cindy's got a bit lost under the other flavours while my souffle had distinct hints of asparagus that worked surprisingly well in a sweet context. It's a fun shop and one that would reward more exploration. Vegans might struggle though, my sense was that everything was heavy on the dairy. 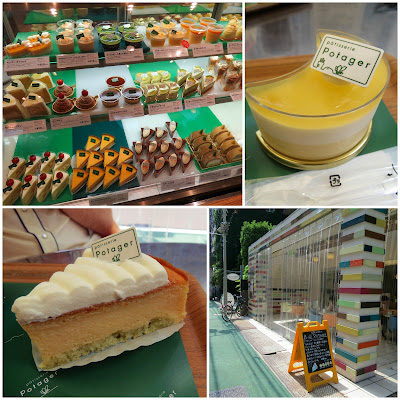 We strolled around for a while, making our way up the Hikarie building for a view over Shibuya and surrounds and some impressive design exhibitions before trekking back out to track down a source of decent coffee. 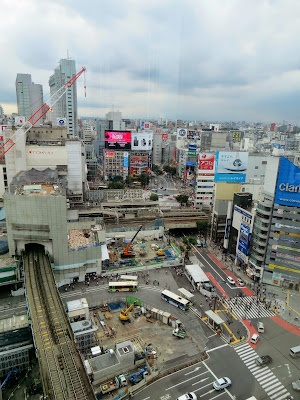 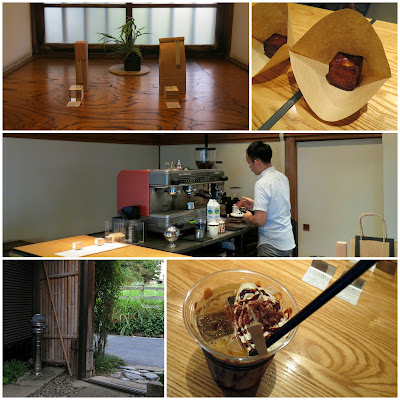 The plan for dinner was to meet up with the rest of my family in Shinjuku where they were staying, but delays in their transport from the airport meant we had time for dinner first. Like a magician, Matt remembered the existence of Ain Soph Journey, an all vegan restaurant, just as we were about to walk past.

This was another Japanese veg*n place that was stuck on Western food - Ain Soph offered risotto, tortillas, paella and other slightly uninspiring menu items. I naively expected that most places would be doing vegetarian versions of Japanese dishes, but that didn't seem to be the case. 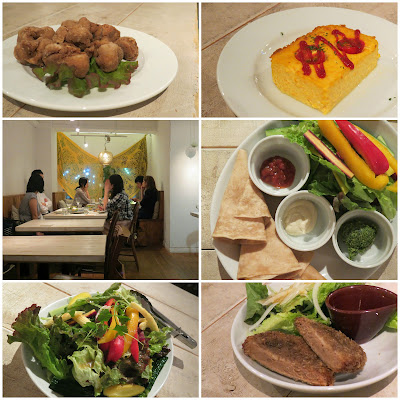 After a quick catch up with the rest of the family at their hotel in Shinjuku, we collapsed back at Matt's house and recharged our batteries for day 2, wiped out from too much food and too much heat.
Posted by Michael at 10:36 am