I got up early on Thursday to hit Central Park for a few hours of birding - it's a world renowned birding site, although mainly during spring and fall migration, when it's the largest blob of green space for miles around and tired birds flop into it for a break. In June it's pretty quiet, but for an out of towner like me there's still a few exciting things to see. The slideshow below has my highlights, including:
Not a bad morning out.

Cindy came in on the subway a few hours later and we met nearby for breakfast - the upper east side isn't loaded with vegan options in the morning, so we settled on Alice's Tea Cup, mostly due to its location, but also because I had a vague memory of hearing something positive about it. 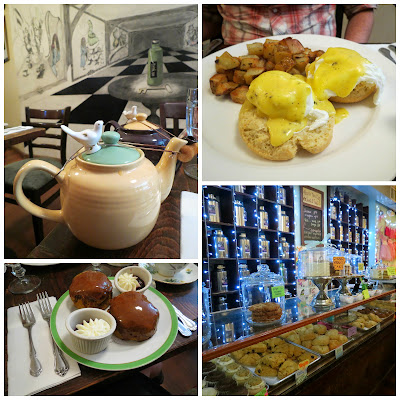 It's a slightly twee place, with a heavy focus on tea and Alice in Wonderland paraphrenalia. The savoury breakfast menu is very eggy and there are pancakes and crepes for the more sweet-toothed among us. But Alice's specialty is scones, so we both made sure to order appropriately. Cindy went for the two scone + tea deal (US$12 ~ AU$12.80), ordering pumpkin scones and a white/rooibos tea blend. The pumpkin scones were nothing like Flo's, coming with a thick sweet glaze and a cakey, gingerbready flavour. I went with the scones benedict, poached eggs and hollandaise sauce on plain scones, served with potato hash (US$13 ~ AU$13.90). It was fine, but had me craving some of the previous few days' more extravagant breakfasts. Alice's is a handy option if you're after an early bite on the Upper East Side, but with so much else to hit up in New York I wouldn't make it a priority.
After a bit of a stroll around Central Park we headed for our main goal for the day, the Guggenheim Museum. Which, it turns out, is closed on a Thursday. Bugger. We headed up to Harlem for lunch to figure out a new plan for the afternoon.
I'd been interested to read about Seasoned Vegan during our New York planning - it was just opening as I made my spreadsheet and the idea of vegan soul food seemed pretty fun. It wasn't on our 'must visit' list, but our location and spare time made it a handy option and it turned out to be one of our favourite meals of the trip. 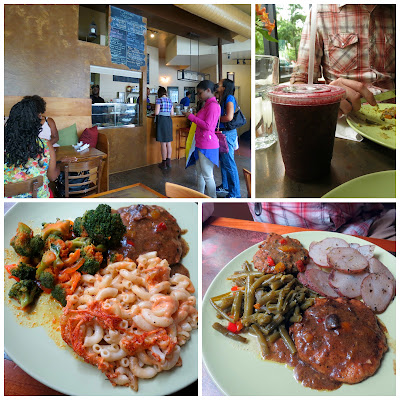 The menu seems to be a regularly rotating one, with a couple of proteins, a handful of sides and a few raw options to choose from. We both did a meal deal - a medium for me (two proteins, two sides, US$13 ~ AU$13.90) and a junior for Cindy (one protein, two sides, AU$8 ~ AU$8.50). I got to sample both the 'meat' dishes - chicken masala and jerked beef - along with some stewed string beans and parsley potatoes, while Cindy had the chicken with sauteed broccoli and vegan mac 'n' cheese. Everything was incredible - the meats were excellent (probably seitan, but we're not totally sure) and the sauces were out of this world. We'll definitely be going home and figuring out how to replicate them. They do a range of smoothies (we split a delicious berry lemonade) and a range of raw and baked desserts (which we were too full to tackle). The staff were super friendly and made us feel very welcome. A definite highlight of the trip - we wanted to get back up there for another round in the few NY days we had left, but we ran out of time.
After lunch we fell back on The Frick Collection, a Manhattan mansion turned gallery stuffed with art collected by industrialist and militant anti-union capitalist Henry Frick. The house was fascinating to explore and the collection was interesting enough (although the more you read about Frick the more you kind of resent his wealth and the whitewashing of his reputation that goes on in the gallery). 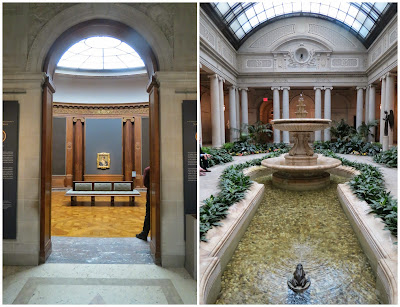 We headed back to Williamsburg for a pre-dinner break, but wound up swapping an hour or two on the couch for a couple of cocktails on the rooftop at the Wythe Hotel. The main attraction is the view, although in the late afternoon the view over to Manhattan is also the view into the sun so we limited our photos to the rooftops of Brooklyn. It's a pleasant place to sit for a bit, although it was filling up fast when we headed off at around 6:30. 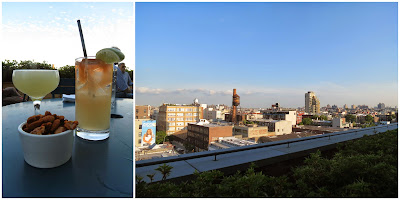 The dinner plan was Hangawi, a vegetarian Korean place in Midtown that had been recommended to us by Michelle. It's a big venue and was already bustling when we arrived - things stayed pretty full all night, so I'd really recommend booking.We kicked things off with a couple of soju-based cocktails (a reincarnation for Cindy and a mojito for me, $US10 ~ $AU10.70 each). They were light on the booze, but still refreshing enough. 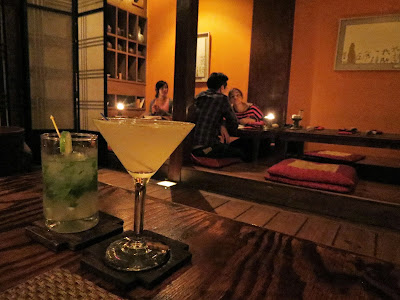 The a la carte menu is overwhelming, with about 20 starters and soups (~US$10-12 each) and even more mains (~US$18-22 each). They've got a separate gluten free menu and everything is vegan. Luckily, they took the decision out of our hands by offering "the emperor's tasting menu," a US$65 (~AU$70) set menu that we were enthused to try out.
The starters were a dumpling soup steamboat and a summer green salad with silky tofu and a citron tofu dressing. The dumplings were great and the soup was filled out with little slices of rice cake. The salad was fresh and sweetly dressed. 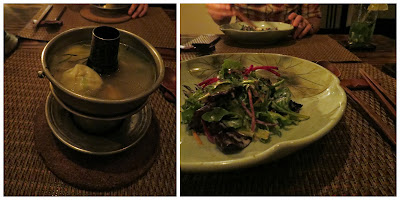 The spring appetizer platter came out next, featuring a pumpkin-stuffed apple, a maitake mushroom croquette in dill sauce, a kabocha pumpkin cake stick and a couple of little cabbage rolls. A visually and texturally satisfying platter of delicious little nibbles. It was followed by the emperor's rolls, a DIY Korean pancake plate, with three different kinds of wrappers and an array of fillings including multiple types of mushrooms, carrot, seaweed and other pickled vegetables. 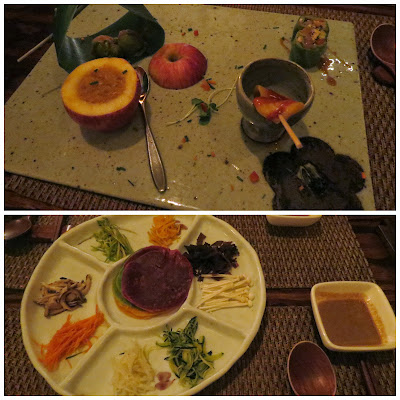 You have a choice of two dishes for the main meal, so naturally we ordered one of each - a mixed mushroom sizzler and tofu with mixed vegetables, both served with avocado stone bowl rice. The mushrooms were mild and hearty, coming with spicy pickle accompaniments (including some excellent kim chi), while the tofu had a bit more of a kick. The avocado rice bowl was like an egg-free bibimbap, with the bowl turning the rice at the bottom into crisp little chunks. Everything was excellent. 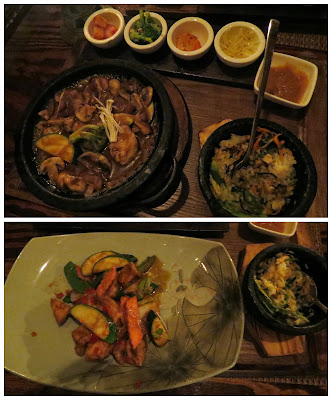 We were really struggling for room at this stage, and were relieved to see a modestly sized dessert turn up: a black rice pudding with cacao nibs and a blob of soy icecream in the middle. I'm often underwhelmed by the bean or rice-based desserts that Japanese, Chinese and Korean places offer up, but the cacao really added something to the standard rice pudding flavour here and the icecream was great. 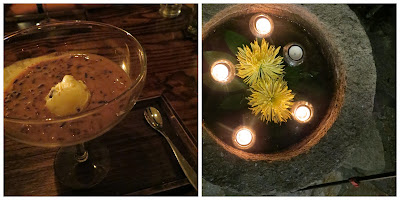 Hangawi was another of the more memorable meals of our trip. With this banquet under our belts, we had the confidence but sadly not the time to work our way through the rest of the menu.
Posted by Michael at 11:43 am