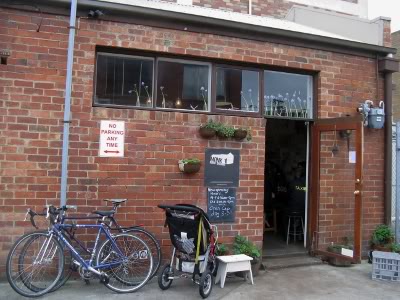 It's rare that a vegetarian cafe generates buzz amongst the omnivore set, but Monk Bodhi Dharma has done just that (see, again, an extensive link-list towards the bottom of the post). This is most likely due to their coffee chops - it's another third wave joint with a fancy bean rotation and even fancier set of coffee preparation methods. 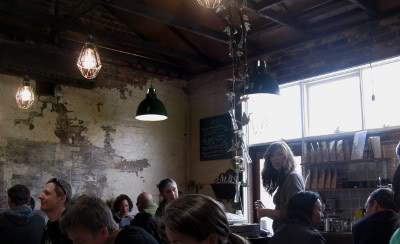 It's consistently crowded, and densely designed at that. I have rarely felt this cramped while eating out, having to leave my seat and shuffle round the cafe in order to let some other customers depart. BYO collegial attitude! 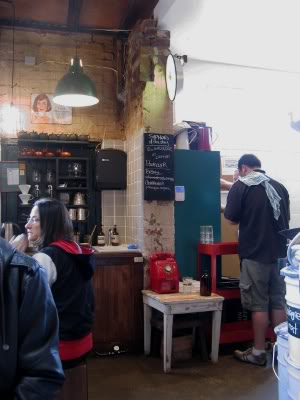 However Monk Bodhi Dharma has some other features that endear it to this finicky breakfaster - an extensive tea menu and a complete lack of eggs. Yes, folks, they have a page-long breakfast menu where the only thing that's poached is a pear. I was spoilt for choice - the cereals had luscious-sounding fruit accompaniments, toast came with beans or bruschetta toppings or kicked-up avocado and the ricotta hotcakes were pesto-topped savoury temptations. 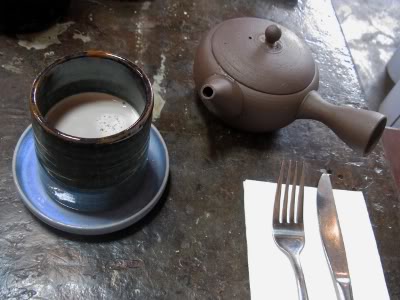 I tried out their soy chai and it was not only one of the cutest ones I've been served around Melbourne; it was one of the tastiest and best prepared. 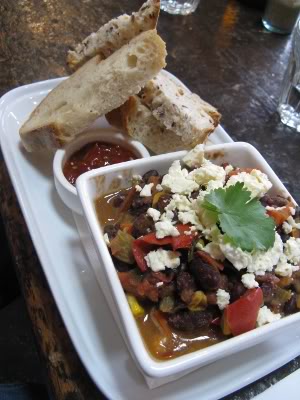 Michael ate the Yucatan "Peasant" Beans ($14.50) - slow cooked chile beans served with feta, toasted sourdough and house made chile jam. Michael found the presentation awkward - there was no room to slather the beans on the toast, and a fork wasn't the best tool for scooping up such a runny sauce - but he spoke highly of the flavours. 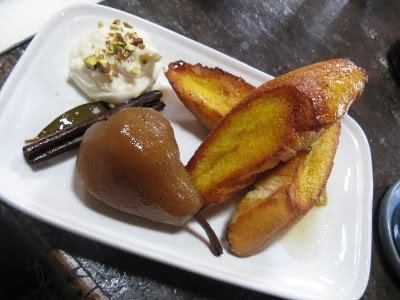 I ordered the extremely popular Madagascan French Toast ($15.50); this saffron French toast came with a cardamom, vanilla and cinnamon-poached pear, lemon ricotta and crushed pistachios. Between the saffron, the poaching spices and a suspected hint of rosewater, this was a very fragrant dish; I'd almost warn folks who dislike floral flavours against it. I loved it, and the crusty baguette too - it was almost easier to eat the toothsome toast by hand than use cutlery. The ricotta was a funny one - utterly smooth, none of that usual velvety texture, and intensely sweet. It's a very memorable dish and I'd rate it with Ray and Gingerlee's French-inspired toasts as a personal favourite (all the better that it's egg-free and vegan-friendly!). 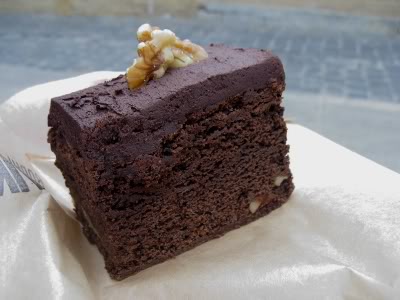 Having heard good things about their cakes, Michael ordered one to takeaway - it was an enormous iced wedge of cakey brownie goodness, with a nice coffee kick. 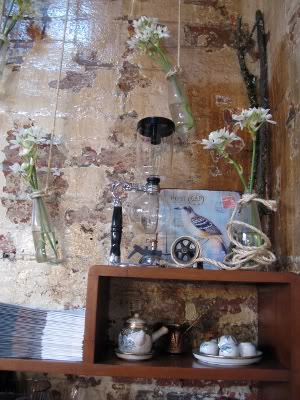 Service was reasonably efficient given the demands of the crowded space; some staff were notably more cheerful than others.  I'd like to try more from the very appealing menu but it's rare that we make it across town; I haven't sampled enough from nearby Las Chicas or the Galleon either.  There appears to be no end of southsiders frequenting these great cafes, though, and I look forward to at least experiencing a few more of their dishes vicariously online.
____________ 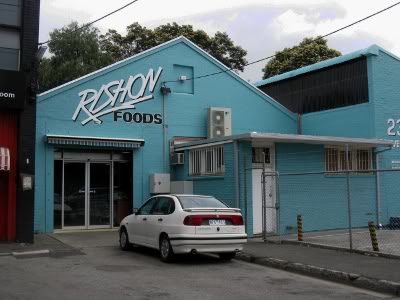 After breakfast, we continued to explore Balaclava.  K recommended a visit to Rishon Foods, a specialty kosher store - in their efforts to avoid mixing meat and milk, the Jewish community have developed many vegan-friendly products.  Rishon has shelves full of vegan sweets and freezers well-stocked with dairy-free icecreams, a few faux-meats and the like.  For us non-vegans, the collection of rennet-free cheeses is impressive too.
We enjoyed observing the mix of old and new along Carlisle St, picking up some bagels from Glick's and checking out an izakaya menu before heading into Coles, where another wealth of kosher specialty products awaited.  It's a facet of Melbourne we've not really experienced before and one I'd certainly like to revisit.  As Carla wryly noted, this is the southside that us northsiders are allowed to like.
____________
Monk Bodhi Dharma
rear of 202 Carlisle St, Balaclava
9534 7250
unlicensed
veg breakfasts $7-15.50
www.monkbodhidharma.com.au
Rishon Foods
23 William St, Balaclava
9527 5142
www.rishonfoods.com
Glick's Cakes & Bagels
330 Carlisle St, Balaclava
9527 2198
www.glicks.com.au
Posted by Cindy at 11:54 am