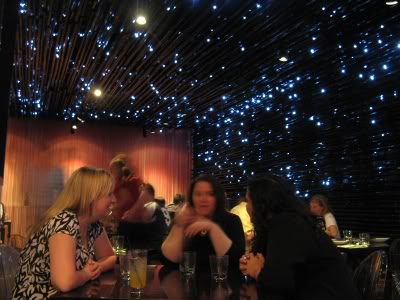 Some of my closer colleagues and I have milestones to mark this year-end and I persuaded them that we should make that mark with a banquet at Gingerboy. It's been about 20 months since Michael and I first sampled their banquet - back then we found the vegetarian options excellent but not well-identified.  This booking had a more auspicious beginning, with the staff member I spoke to on the phone confessing to being vegetarian themselves.  Our waiters on the night might not have been vegos but they knew the deal and communicated it well, always pointing out which dishes were veg-friendly and which not, which dishes were portioned for Michael and I only and which were intended for the entire party to share. 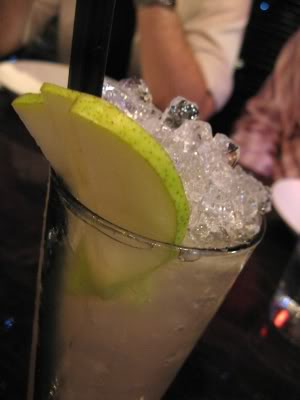 The cocktail menu is still prominent and original - this here near-abstainer was inspired to order two of the beasts over the course of the evening. 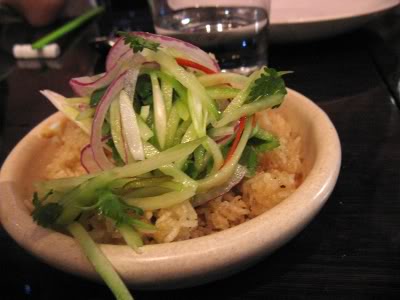 The first vegetarian special of the evening was a super-crunchy rice dish.  We loved the dressing, but it never really melded with the harsh rice chunks. 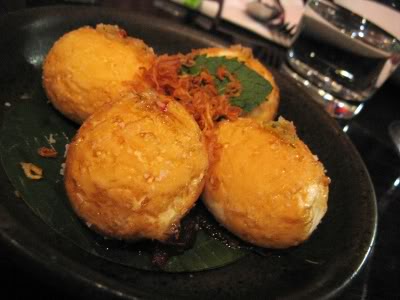 There were son-in-law eggs all round.  While the folks at Easy Tiger would have you smash these into your rice for richness and spice, the Gingerboy staff goad their customers to eat an egg whole! 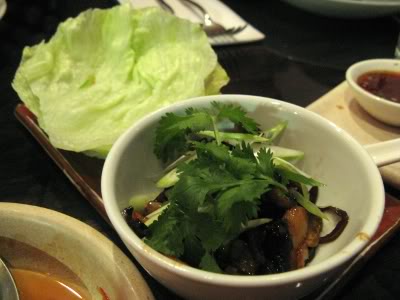 The san choy bau was also shared amongst vegos and omnis alike; it featured some gloriously seasoned mushrooms. 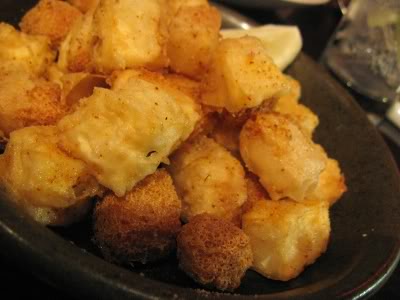 Michael and I were thrilled to see the return of the crispy chilli salt tofu, a veg adaptation of Gingerboy's cuttlefish snack.  Crisp and well-seasoned on the outside, meltingly silken on the inside, I dread to think what quantities I would consume if I weren't constrained to sharing this one bowl-full at a banquet. 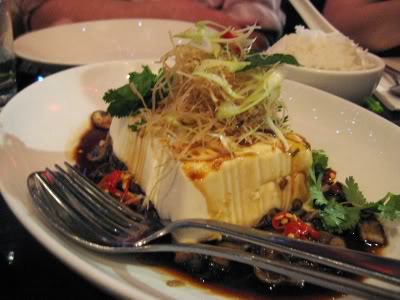 More silken tofu!  This one with its straight-out-of-the-box ridges still apparent, smothered in a dark, rich mushroom sauce and topped with fresh herbs and chilli. 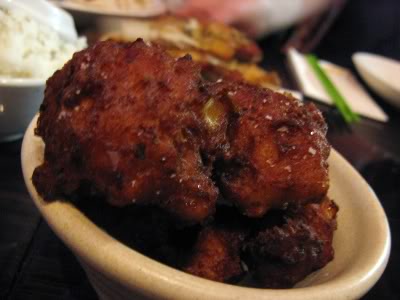 The corn cakes didn't evoke the same enthusiasm as last time we had them - they were very batter-heavy and didn't contain an awful lot of corn. 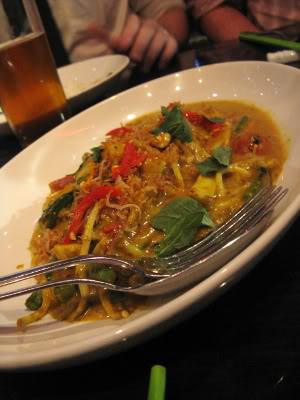 We were encouraged to sop up this coconut-heavy sauce with the fritters, but I didn't think they worked especially well together.
We were lefting waiting - contently waiting and digesting - for quite some time before I glimpsed the dessert platter I was so looking forward too... 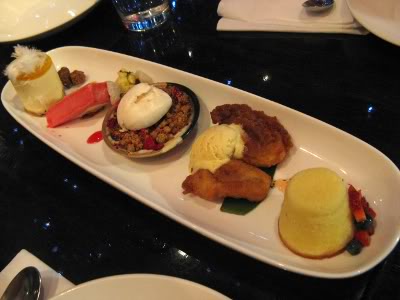 Here I think at least half of the fun comes from the variety!  Front to back, the platter featured a lemongrass pudding, banana fritters with Baileys icecream, a chilli fruit crumble, raspberry semifreddo and tofu cheesecake. 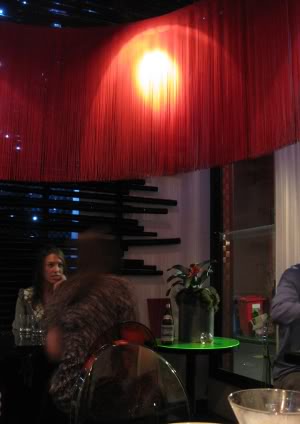 Our second visit to Gingerboy met, but probably didn't exceed, our expectations.  The food was consistently enjoyable but didn't give me any "Wow!" moments... though there was one "Hallelujah!" for those irresistible tofu bites.  Like Easy Tiger, this food doesn't have the chilli wallop of the cuisine that inspires it.  Unlike Easy Tiger, this progression of dishes was a bit weighed down with richness and thick sauces; I missed the searing and fresh green papaya salad that we sampled on our previous Gingerboy outing.  And although I kinda like the glitzy cocktail bar look, the cocktail bar music volume frustrated our attempts to talk across the table.
A fine night was had - quibbles aside, the food was very good, reasonably priced (now $70 per person) and perfectly portioned.  But it ultimately had me hankering for another meal at Gingerboy's sister restaurant Ezard, where the flavours are bitingly fresh, conversations are easily heard across the table and, inevitably, the prices are higher.
____________
Since our last visit, Gingerboy has been blogged at Enter Into Ming Dynasty, Collection of Interior Architecture news_PuO, INTERIOR DESIGNS, FOODTRAIL, Jeroxie, Food Rehab, Out of my kitchen, Kit's Cucina Culinaria, That Jess Ho, doublecooked, Homdaum, www.bennieloveswombie.com, Intelliblog, Gluttony Gluttony, One Fat Cow, The Culinary Girl, "...it pleases us", Dale's HD Inspirations, minibites, FineDiner, Gastronomy Gal, and easy as vegan pie.
Posted by Cindy at 12:58 pm