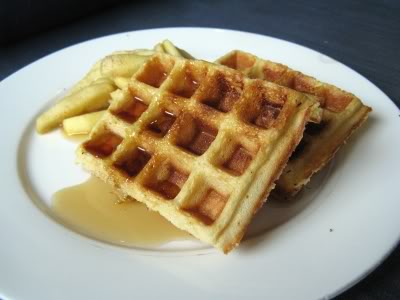 After years of claiming my icecream maker as my one single-use totally inessential but much-loved appliance, I've caved and acquired another. This month I traded in six years' credit card points for a waffle iron. I blame Isa Chandra Moskowitz and her irresistible Vegan Brunch. The omelettes, scrambles, hash browns and home fries are unbeatable, but they only had me wanting more. Every time we pulled the book from the shelf I couldn't help flicking through and lingering longingly over the seven waffle recipes, several of them photographed in drool-inducing poses with plump fruit and lurid syrups.
When my highly anticipated waffle iron arrived I happily hefted it home from the post office, devoured the manual, carefully followed the seasoning instructions and started simple, with Isa's recipe for old-fashioned Chelsea waffles. It was painful to toss my first pan-full in the bin but the manual insisted on it (I presume they soaked up the worst of the chemicals the iron is treated with). The next lot were well worth the time it took to do them properly - we ate them for breakfast with lightly stewed cinnamon apples and a splash of maple syrup. We gradually finished the rest, jam-smeared, as snacks. 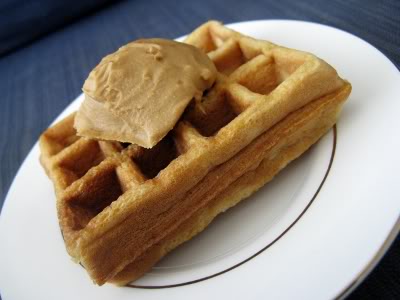 I reckon the only way you'd possibly pick these as vegan is through their distinct lack of egginess. They're gently sweet (I added maple syrup instead of Isa's barley malt syrup) and a little cornmeal supplements the flour; these ingredients served to totally overpower the soy milk and lend the waffles a satisfying chewiness. And I learned the hard way that waffle batter doesn't work like muffin mixture - any flour that's not mixed in thoroughly ultimately pops up as an unpleasant chalky clump.
One day later I made more, rationalising this as a way to use up a not-so-fresh banana and stock myself with workday afternoon snacks. I added some vanilla-infused rum and a pinch of nutmeg to perk up that sad banana and flipped round the mixing (whisking wet gradually into dry) to avoid the flour pockets. Perfect! I've enjoyed these waffles best straight out of the toaster and slathered with peanut butter.


In a small bowl, mash the banana and stir in the rum. Set it aside.
In a medium-large bowl, stir together the flour, cornmeal, salt, baking powder, cornflour and nutmeg.
In a small-medium bowl, whisk together the milk, vinegar, oil and maple syrup.
Gradually whisk half of the wet ingredients into the bowl of flour until smooth and thick. Stir in the banana, then whisk in the remaining liquid to attain a smooth batter.
Cook the batter in a waffle iron, following to the manufacturer's instructions.
Posted by Cindy at 10:31 am