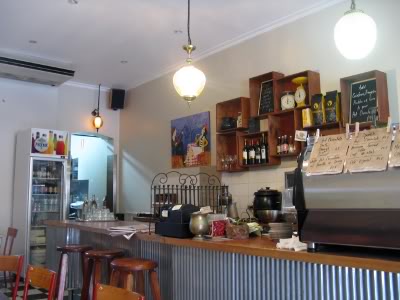 It's taken me a while to come good on my vow to try Juanita's post-breakfast options; it seems we spend lots of time brunching in Fitzroy but I'm rarely there for other meals. It's been so long that the selection of empanadas they previously offered has been replaced by a more extensive Mexican menu. There's lots of chicken, beef and chorizo, but thankfully there are also three or four veg options dotted amongst them. 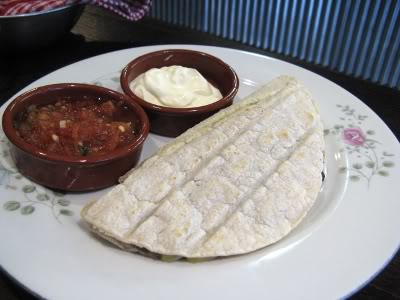 The veg quesdilla is filled with mushrooms ($9). The house-made salsa is great, and the corn tortillas are very much like the ones I've bought from Casa Iberica (... so I'd guess there's a good chance they're sourcing them from the Casa rather than making them themselves). 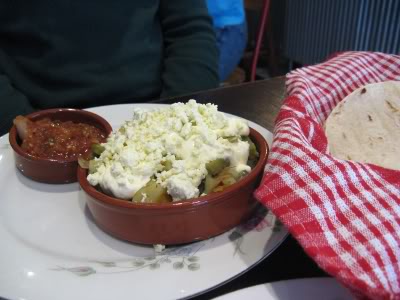 We also shared the vegetarian tacos ($18); here you receive a dish of roasted cactus, potato, onion and chilli topped with cheese and sour cream, with salsa and warmed tortillas on the side. The cactus was very much like roasted capsicum - watery, velvety and slightly sweet - and the tacos were pleasantly light, not weighed down by the cheese and cream. 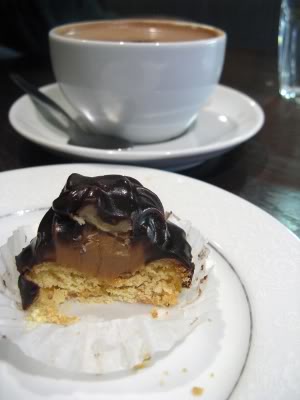 All the better for me to fit in dessert! Hot chocolate ($5) comes in chilli, orange, mint and coconut varieties; there's also a hot white chocolate with vanilla or honey, and the option of adding liqueur to any of them at extra cost. My hot chocolate wasn't gloopy with cornflour thickening (as they are at San Churro) and had actual shredded coconut all through it - yum! I went for the smallest of the sweets displayed in the cabinet, a chocolate walnut tart filled with caramel ($2.20), which was precisely as good as it looks.
Juanita's is the kind of casual and un-hipster cafe that's becoming rare on Brunswick St and we found the service timely and welcoming. I'd like to visit more often, particularly when I have room to try their churros! But as a vegetarian, I'm not sure that it'll be for dinner - Trippy Taco's all-vegetarian tortilla-wrapped meals are cheaper and just as fun.
____________
You can read about a Juanita's breakfast we ate here.

Update 22/11/10 - Juanita's has closed and will soon become yet another chocolate cafe
Posted by Cindy at 10:38 am