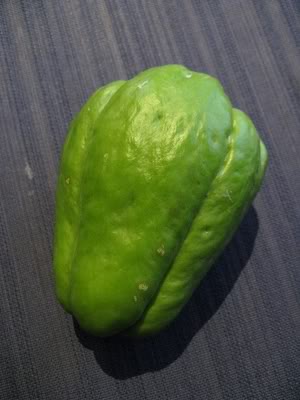 My raspberry-coconut icecream earned me a novelty prize at the annual lab culinary competition - a choko and a taro root.  I could barely even recognise these vegetables (thanks to twitter for the help!) so I had little idea how best to cook them.  Of course the reliable ol' internet had some helpful suggestions. 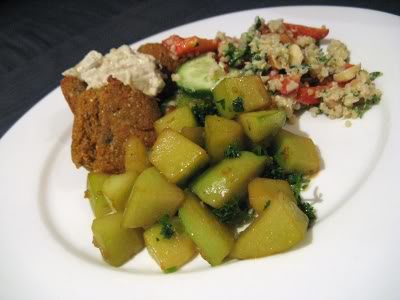 Even many folks who can't spot a choko recalled the Aussie urban myth that McDonald's apple pies are filled more with choko than with apples.  I wasn't inclined to test its palatability as a dessert and instead took some tips from The Simple Green Frugal Co-op and stir-fried my choko, adding a little soy sauce, parsley and lime juice when it was cooked through.  (We ate it as a side to just-add-water falafel and the eat-anywhere quinoa salad.)
The choko's texture reminded me very much of cucumber; firm yet full of water.  It didn't taste of much at all.  I'd be unlikely to cook it on its ownsome again but I can imagine choko making a great addition to a meal-sized stir-fry with a variety of crunchy veges, holding up to the heat far better than zucchini.
Unfamiliar green veges can be a little threatening but the choko is actually as mild-mannered as they come.
Posted by Cindy at 9:09 am