While I thoroughly enjoyed my cashew ginger crunch granola, I didn't think it would be wise to continue eating such a high-sugar breakfast indefinitely. My mind started ticking over on making my own version. I find uncooked oats too chewy: it takes me at least half an hour to get through a bowl of them! Not an envigorating start to the day. My moosewood book has a baked recipe, but it involves both oil and maple syrup so it's not much of an improvement in the health stakes. Then I remembered that some health-food grainy things are sweetened with apple juice rather than sugar and thought I'd give that a go. I browsed the internet to get a feel for the right proportions of liquid to grain, oven temperature and baking time, then just had a go with what was in the house.

I've been eating jarred pears with my cereal and by this stage I had a jar of juice. I strained out the floating pear remains and had about 1 1/2 cups of sweet liquid. I mixed this into about 4 cups of rolled oats and left it sitting around a while to let the oats soak up the liquid. With hindsight, I'd suggest not leaving it for more than about 15 minutes. I forgot about it for an hour or so, and my oats had the globby, slightly jellyish consistency of porridge. Next I heated the oven to about 150 degrees (it's best to go for a low temperature) and spread the mix out in an ungreased baking tray.

Check it after 10 minutes. Stir it around, and chop up the big clumps with a spoon. Keep baking it, checking and stirring every 5-10 minutes, until it starts to brown. That'll take about half an hour. I found that the little bits were well-browned, but the bigger pieces were still chewy in the middle. I picked out the big bits and put them back in the oven with about a cup of chopped almonds and half a cup of dessicated coconut. Baking paper's a good idea, but I didn't use it before 'cause the oats were too mushy. I think I gave this mix only another 10 or 15 minutes, with one bout of stirring in the middle. By then the coconut and oats were well browned. 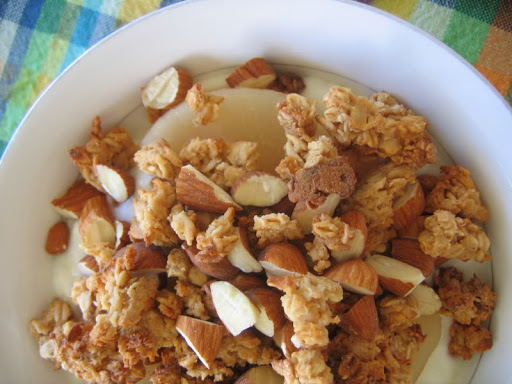 The result was mostly a success. The largest bits aren't completely dry, but the almonds give it some crunch. It's not nearly as sweet as any granola I've bought and the fruit that I eat with it does that job to my satisfaction. I'll try to keep this up and maybe experiment with different grains, nuts and seeds in future batches.
Categories
Posted by Cindy at 11:11 am