I was quite taken by the pictachio and dark chocolate biscotti that Mellie from tummy rumbles recently made and when I bought some pistachios for om ali, I made sure that I took enough to try biscotti too. Surprisingly my first inclination was to remove the chocolate from the recipe! I wanted to create a version with the heady flavour of an Indian dessert, where I first encountered pistachios used in a sweet. I thought it'd be wise to halve the original quantities for this experimental batch.
Bollywood biscotti
(adapted from Mellie's recipe for Cantuccini di Cioccolato e Pistacchio)

Beat the eggs and caster sugar in a mixer until thick and creamy.
Add the flour, baking powder, salt, rose water and cardamom and mix until just combined. Stir in the pistachios.

At this stage Mellie described the mix as a soft dough. Mine was at the super-sticky end of the biscuit dough spectrum, even though it was holding together as a mass, so the next steps were pretty messy. Plonk the dough onto a very well-floured surface. Roll it into one or two thick sausages, about 5cm in diameter. Place them on a paper-lined baking tray and flatten them down until they're about 2 cm high. (These are Mellie's suggested dimensions, I think mine were a bit smaller.) Leave plenty of room around each dough-sausage, because they will spread.

Bake 'em at 190 degrees for 15 minutes. Next you need to cut the biscuit logs into slices, no more than 1.5 cm thick. Mellie didn't mention waiting for the logs to cool but some other recipes do. It might depend on your knife skills: these fellers will be crusty on the outside and soft in the middle, so a blunt knife will probability squash the log as you cut. On the other hand the crust probably gets even tougher to cut once it's all cooled down. I'm impatient and I did mine straight away.

Lay the slices flat on the tray (more spaced out than that pic on the right) and bake them for a further 10-12 minutes. They're supposed to dry out, but not get too golden. Mine were golden, even though I flipped them over half-way through. It's probably a good strategy to use an oven shelf that's distant from the heating element.

These are soft and delicious warm, but they'll develop that characteristic biscotti crunch as they cool. By then, the most satisfying way to consume them is after dipping them in a drink. I reckon chai's the pick for this flavour combination, but coffee or a glass of milk would also be up to the task. 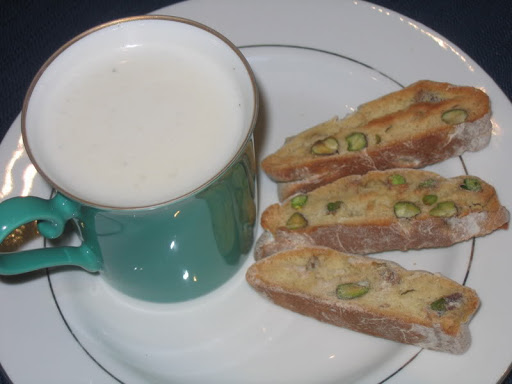 This small amount of rose water and cardamom made the biscotti fragrant rather than strongly flavoured and I like that effect. Michael was unusually enthusiastic about them, so they'll no doubt be repeated in the future.

Categories
Posted by Cindy at 8:33 am