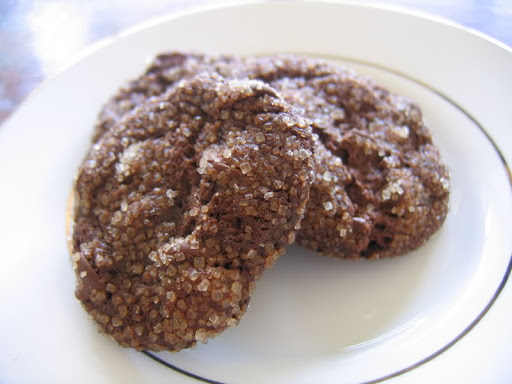 A hilarious Vanilla Ice-style party invitation brought to our attention that Krusty's birthday was coming up and, although we couldn't make it to her Brisbane-based party, I wanted to present her with a small gift. Krusty has been unwaveringly enthusiastic about our cooking, our blog, and sharing her favourite restaurants with us, and I was confident that she'd appreciate a small box of home-made biscuits to mark her birthday. I love baking for others: it's the ultimate comfort food, most people don't take the time to do it, and it's a treat rather than a sensible necessity, as the most enjoyable gifts are.
Krusty is a sweet and slightly off-beat girl with pretty ginger hair, as well as depth and intelligence. I think this recipe captures almost all those qualities: although the spiced chocolate angle is a little unusual, it loses a mark or two because the recipe belongs to Martha Stewart, who is surely as mainstream as it gets!
I've previously made this recipe several times, substituting golden syrup for the molasses. It produces a lighter and sweeter (but no less delicious) biscuit. This time I followed the recipe as intended, buying some blackstrap molasses from Allergy Block.
Chocolate and ginger biscuits
(slightly adapted from Martha Stewart's recipe for Chewy Chocolate Gingerbread Cookies)
220g dark chocolate chips (the "holds shape when baked" ones are great)
1 1/2 cups plain flour
1 heaped teaspoon ground ginger
1 teaspoon ground cinnamon
1/4 teaspoon ground cloves
1/4 teaspoon ground nutmeg
1 tablespoon cocoa
125g butter
1 tablespoon freshly grated ginger
1/2 cup brown sugar
1/2 cup molasses
1 teaspoon bicarbonate soda
1/4 cup granulated sugar 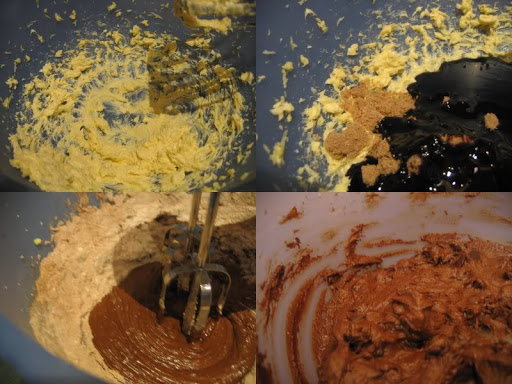 Sift the flour, ground ginger, cinnamon, cloves, nutmeg and cocoa into a medium bowl. In a separate and larger bowl, beat together the butter and grated ginger until whitened (it'll take a few minutes). Add the brown sugar and beat until combined. Add the molasses and beat again.
In a heat-resistant cup, dissolve the bicarb soda in a small amount of boiling water. Gradually add the dry ingredients and soda mixture to the butter, mixing constantly. Stir in the chocolate chips and refrigerate the lot for at least an hour. 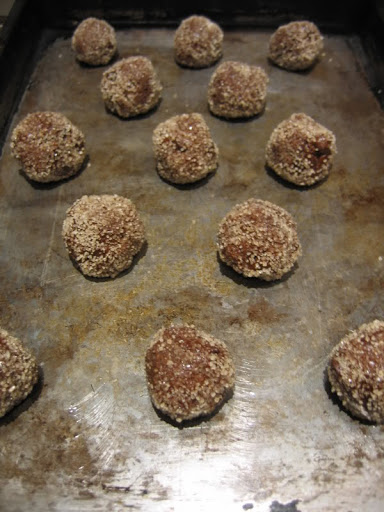 Heat the oven to 160 degrees, grease a baking tray, and pour the granulated sugar into a small bowl. Roll heaped teaspoons of the biscuit mix into balls, coat them in the sugar, then place them on the baking tray. Bake the biscuits for 10 to 12 minutes, until the surface is cracking a bit. Roll the balls one tray at a time and return the remaining mixture to the fridge between batches.

Categories:
Posted by Cindy at 7:22 pm