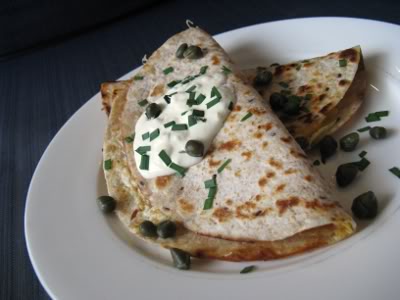 While Michael toured New Zealand, my work days lengthened a little and I cooked for one. I started out preparing dishes he hates - a pineapple-spiked stir-fry stretched across several dinners and lunches, and each night concluded with banana-butterscotch pudding (made with double banana, just to rub it in). My office hours meant that I couldn't sustain such cooking endeavours, though, and pretty soon I just wanted something simple and filling.
Heidi Swanson's quesadilla recipe delivered all the unfussy nourishment I needed and was tastier and fancier than I'd dared hope for. The important bits are an egg and a tortilla; to my mind, all other ingredients are negotiable. I had sour cream, a stub of cheese, a jar of capers and a pot growing chives and so stayed relatively true to the original recipe. On other days with other fridge scraps, I think this could work just as happily with a bit of avocado, some salsa or relish, almost any kind of cheese, fresh herbs of all kinds, probably some olives and maybe even pickles. 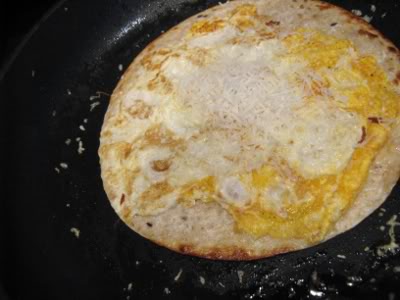 The essential egg doesn't leave much room for a vegan version. A runny faux-omelette batter would probably meld just as delightfully with a tortilla, but the effort of blending up a batter negates this recipe's meal-in-a-minute appeal. A silken tofu breakfast wrap might be the better tactic.
When Michael returned home, delayed and exhausted at midday, I emailed him express instructions to make himself one of these with the last remaining egg. Turns out it's the meal-for-one that we can both enjoy.


Heat a teaspoon or two of olive oil in a frypan over medium heat. Crack an egg into a mug and whisk it thoroughly with a fork. Pour the egg into the frypan and after it's cooked for just 10-15 seconds, lie a tortilla over it, so that the frying egg adheres to the tortilla. After they've cooked together for a minute or so, flip them over and grate a little cheese onto the egg. Once the cheese has melted a little, fold the tortilla in half and transfer it to a plate. Top the quesadilla with sour cream, capers and chopped chives and serve.
Posted by Cindy at 3:33 pm