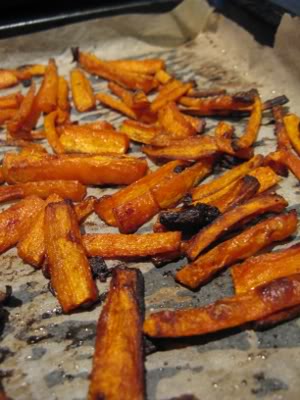 I have a deep and abiding love for potato chips and when I crave potato chips, I will accept no substitute. Thankfully I wasn't particularly fixed on potato chips when I tried this recipe for carrot chips and they forged their own identity as a tasty snack or side. Carrots roast up sweetly and softly, not quite as fluffy as a potato but far less soggy than a sweet potato. The charred bits crisp up delicately but teeter on all-out burning. 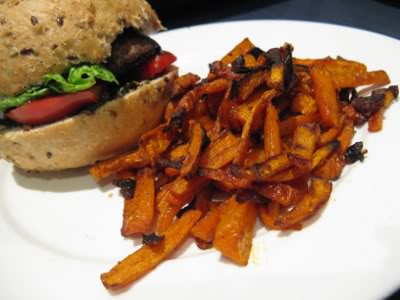 While we're on the topic of burning, these chips are dressed in chipotle chili for some extra smoky heat, à la Tofu for Two. I cooled them down with a little mayonnaise and I imagine that the original accompanying avocado dip is even better.

Chipotle carrot chips
(a recipe from Tofu for Two)


Preheat an oven to 200°C. Line a baking tray with paper.
In a medium-sized bowl, whisk together the mashed chiles and olive oil. Chop the carrots into sticks (not too fine!) and toss them in the chipotle dressing until evenly coated all over. Spread the carrot sticks out on the baking tray so that they're a well-spaced as possible. Sprinkle over some salt and bake until tender and caramelised, 20-40 minutes. Toss them at least once as they bake. (The original recipe says they take up to 50 minutes, but ours needed only half that - presumably they were a lot thinner.)
Serve with a cooling condiment.
Posted by Cindy at 2:03 pm