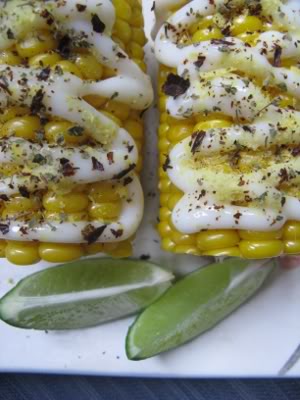 This weekend snack was also somewhat inspired by our Mamasita meal, though it owes at least as much to our vege box and everything, really, to Viva Vegan. Terry Hope Romero offers a couple of variations on street-style corn and it was most convenient for me to go for baking my corn and slathering it with vegan mayonnaise.
While this doesn't involve the charred edges and cheesiness of Mamasita's street-style corn, it has its own charm - the kernels are juicy and sweet and the mayonnaise carries the nooch, Mexican oregano and dried chilli across the whole surface area. It's also pretty fun to roast corn still in its husk. 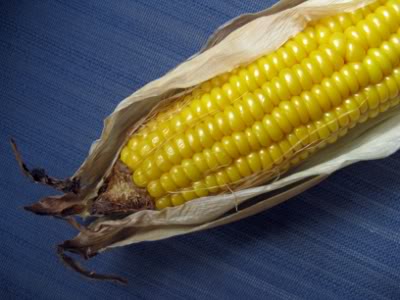 
Place the corn cob, still tightly wrapped in its husk, on a rack in the oven and roast it for 30 minutes.
Carefully unwrap the husk from the corn and clear away the corn silk. Chop the cob in half to form two more manageable pieces and place them on a plate.
Slather over the mayonnaise, then sprinkle over the salt, yeast flakes, oregano and chilli. Serve with a wedge of lime on the side for squeezing over the top.
Posted by Cindy at 2:08 pm