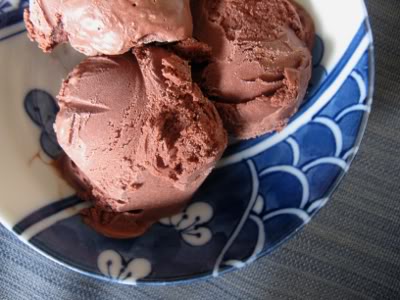 February set forth a last blast of heat and I resolved to churn some more icecream. I revisited my vegan salted caramel one and it was spectacular, but then I went and shared most of the batch with friends. I needed MOAR ICECREAM and I didn't really want to leave our air-conditioned fortress to buy it or its constituent ingredients.
Flicking through The Perfect Scoop, I noticed a chocolate and raspberry icecream that didn't include eggs. I had (frozen) raspberries and I had no eggs! With coconut milk in the cupboard I figured a vegan version (no heavy cream) was the easiest solution. It all really was quite easy, though it left me with a dirty food processor and sieve (for Michael) to clean up.
This version is also lighter on the cocoa than David's because I ran out 3 tablespoons in. It's still chocolatey enough (look at the colour) but it's more like a milky chocolate that leaves plenty of space for raspberry fruitiness.
Chocolate & raspberry icecream
(adapted from a recipe in David Lebovitz's The Perfect Scoop)


In a medium saucepan, stir together the coconut milk, cocoa and sugar. Bring them to the boil, stirring regularly, and then take them off the heat. Fold in the raspberries, cover the saucepan and allow it to sit for 10 minutes.
Blend the mixture to smoothness - to prevent disaster with my food processor, this meant I fished out most of the raspberries and blended them first, gradually adding the rest of the liquid. Strain out the raspberry seeds and refrigerate the mixture until completely cold.
Churn the mixture in an icecream maker according to the manufacturer's instructions and freeze until firm.
Posted by Cindy at 4:43 pm