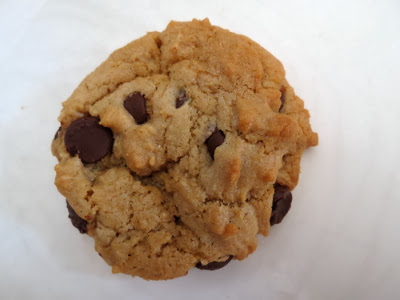 We recently headed out of town with friends for a weekend of card-playing, crafting, karaoke and cooking. Michael lined up some vegan bacon and eggs for Sunday breakfast, while I prepared a (failed) tray of kaju katli and these choc-chip cookies, from hell yeah, it's vegan!.


The cookies are a little different to the version I've relied on for a decade or more. First, they're vegan. Second, you can make them in a single bowl with a sifter and a fork. Third, there's their character. Claryn sums them up well:

They’re maple- and vanilla-scented with hints of caramel, but not so much as to warrant a name change. The dough is really good on its own. These cookies are crisp and golden on the outside and soft and doughy in the middle, with some chew in between. They are not even slightly cakey.

My other recipe uses oatmeal and has a certain heaviness, while the chocolate chips are interspersed with almond chunks. I can eat two with a glass of milk and feel utterly satisfied. With these cookies, though, the soft caramel dough and dark chocolate just melt away with a couple of chews and I found myself reaching for another before the first had even hit my stomach.

It seems I'm not the only person with this reaction. The first box full of them evaporated between dinner and our first open hand of 500. The second larger box silently diminished throughout the second day, until there were none to offer around after dinner.

These could easily usurp my other recipe as this household's go-to choc chip cookie. It's easy to mix together, easy to double and very, very easy to eat. 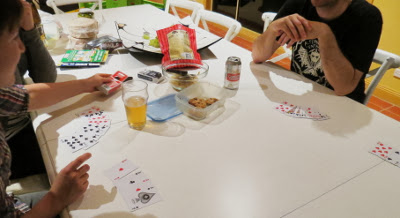 Can't-stop choc-chip cookies
(a recipe from hell yeah, it's vegan!)


Place the brown sugar, maple syrup and oil in a large bowl and whisk them together with a fork. Beat in the apple puree and vanilla. Sift in the flour, bicarb soda, salt and nutmeg, stirring until well combined. Fold in the chocolate chips.


Use two teaspoons to scoop up tablespoon-sized portions of dough and drop them onto the baking trays. For chewy cookies, bake them until they just turn golden, 8-10 minutes.
Posted by Cindy at 5:14 pm