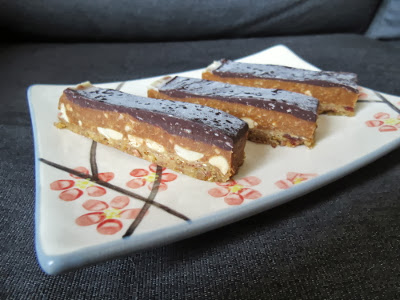 We are blessed with some talented and generous friends. Clamps and Bec are handy with sewing machines and bags of gluten flour (though I've not seen them combine the two): we visited them last weekend to learn shirt sewing and eat spectacular seitan sliders. Then on Sunday morning, while we were still bleary from side-seams that stretched past midnight, our mate Troy dropped round to assess our hot water system and trek out to the hardware shop.


I shared this slice around as a gesture of appreciation. I'd seen it on Eat This! just a day or two earlier and still hadn't shaken the memory of Monk Bodhi Dharma's divine deconstruction of the Snickers bar. Jade's recipe is another mostly-raw ode to that caramel-peanut chocolate, though it sticks closer to the original formation. I made a few convenience substitutions - using up almond meal instead of whole almonds, dried dates in a little water instead of fresh, date syrup instead of rice malt syrup, not to mention crappy peanut butter and not-raw cocoa - and don't think I compromised the flavour at all.


The preparation wasn't quite so smooth, though. The drier dates and flax seeds in the base weren't inclined to grind, while the almond meal had a head start compared to whole almonds. I'd suggest that it might even be worth grinding the flax into a vegan-egg state to assist with binding this base. Mine was a royal pain to press into the tin, and I transferred a whole lot of not-raw spray oil into it via the back of a lubricated spoon. I also didn't pay my coconut oil the respect it deserved - it threatened to split both my caramel and chocolate layers, though they mostly held it together. I think Jade's bars might have a few little white streaks on top, so maybe I didn't go too far wrong.


I don't ride the raw wagon, but these Sniggers Bars hold their own. They're fudgy and sweet, with a bit of depth thanks to the tahini, cocoa and dates. They're best eaten straight from the freezer and don't lose any flavour in the cold.


Sniggers bars
(slightly adapted from a recipe on Eat This!)


In a food processor, blend together the almonds, flax seeds, dates and 2 tablespoons of the soaking liquid. (Next time, I might try grinding the flax seeds first, adding 1 tablespoon of water, then adding the dates and whole almonds to this paste.) Press the mixture into the base of the baking tray. I found this tough! I broke the mix into small pieces with a fork, scattered them across the base and then gradually pressed them flat using the back of a spoon, regularly sprayed with oil. Sprinkle the peanuts across the base and press them in a little to secure them.


Make sure the coconut oil is cool before proceeding with the caramel. Clean out out food processor, then use it to blend together all of the caramel ingredients. I stopped the second I saw a little white coconut oil separating from the rest. Spread the caramel over the peanut base and smooth it over.

Again, make sure that the coconut oil for the chocolate is at room temperature before proceeding. Then it's just a matter of whisking together the three ingredients until smooth. Pour the chocolate over the caramel, gently smoothing it out to the edges. Cover the slice and store it in the freezer; retrieve it and slice it into bars just as you're ready to serve it.
Posted by Cindy at 12:47 pm