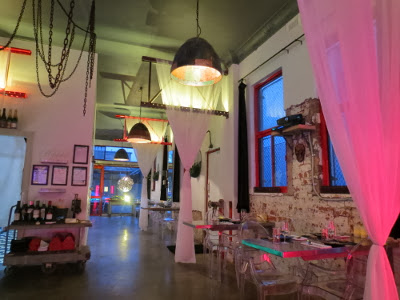 After our successful jaunt to Box Hill, Steph decided that we should form some sort of Sichuan posse, so she got the old gang back together (minus The Simple Eater, who was otherwise occupied) to check out some Sichuan a bit closer to home at Shu in Collingwood. It turns out that Shu has been around for a bit over a year, but they've just recently started running a special vegan degustation night on Wednesdays, where $40 gets you 12 seasonal courses (actually, having written this post I realised there were 13!). Who were we to refuse? Full disclosure: the lovely Rebecca from Shu (and where's the beef? reader Christine) had been in contact with us to let us know about the vegan nights and knew who we were, so our experience may vary slightly from yours. We paid for everything though and it seemed as though the service was just as friendly and helpful across the other tables as well. 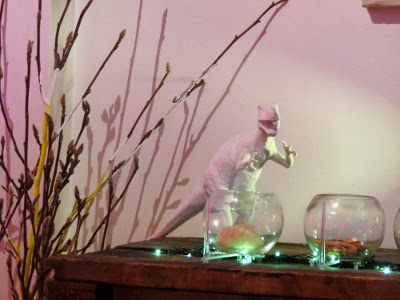 Ambience-wise, Shu couldn't be further from Dainty Sichuan's fairly simple and traditional stylings - it's decorated to within an inch of its life, with neon lights, clear plastic chairs, random sculptures, dinosaur figurines - the fit-out is anything but staid. It's not subtle, but I liked it - everywhere you turned there was something baffling or exciting.

There's no menu at Shu - they're all about grabbing whatever organic, seasonal produce looks good at their Mt Evelyn mate's property and then making up dishes to match. Rebecca was clear about which drinks on the reasonably short list were vegan-friendly, which was a nice bonus. Onto the food! 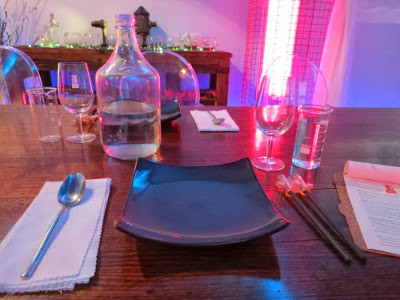 First up: eight little spoons of housemade tofu served in a cinnamon infused soy sauce with a rocket flower or two perched on top. The cinnamon soy was the star of this dish, with the tofu providing a vessel for its salty-spiciness. 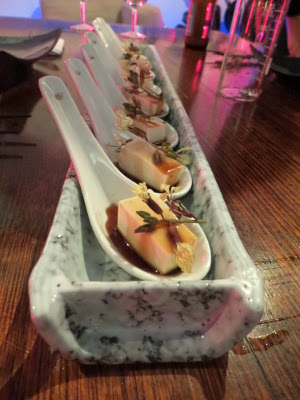 Next up were these discs of purple carrot, topped with pickled chilli, broad beans and borage. 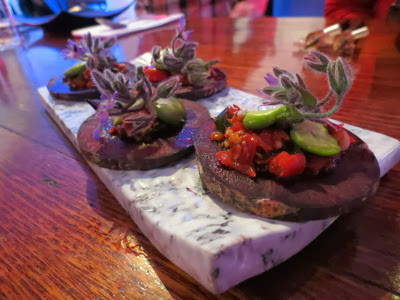 The raw carrot was a very crunchy base, with the pickled chilli flavours really dominating the less potent veggies. No complaints here.

Then came another cold dish, and one of Shu's signatures: daikon rolls filled with broccoli flowers, mushrooms, cucumber and a spicy sauce. 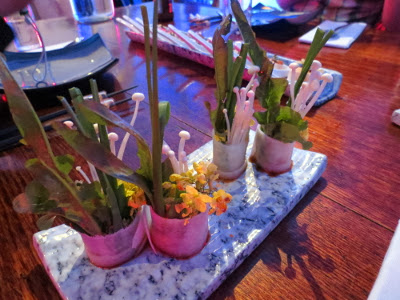 These were very pretty and the fresh, but only loosely bound together and difficult to handle.

The final dish in our first set was this plate of dumplings stuffed with tofu, sesame and soy beans, topped with a sprig of dill. 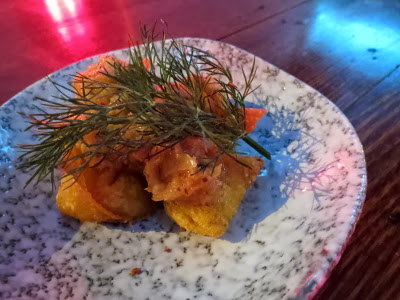 I really loved these - partly because they were our first hot dish and partly because I thought they just worked really well. I'm a big fan of sesame oil and its flavour shone through nicely.

After a brief breather, our next set of four dishes started arricing, starting with pickled cucumber, mizuna (also known as water greens or Japanese mustard) and trumpet mushrooms. 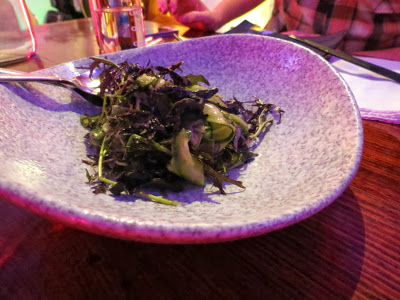 The mizuna added a nice sharp flavour to the tangy pickled cucumber and mushroom bits.

The second salad in this batch was an attractive combo of kale, garlic shoots, broccoli flowers and cashews. 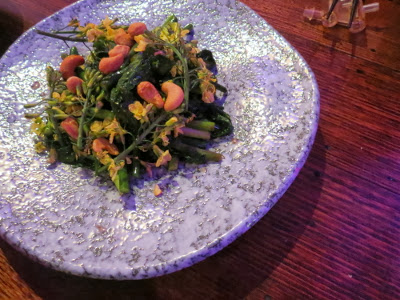 This was another fresh and healthy dish, with the garlic shoots providing the dominant flavour and the variety of textures keeping things interesting.

Alongside the salads we had this dish of grilled eggplant, chilli pickled onion, smashed broadbeans and macadmias. 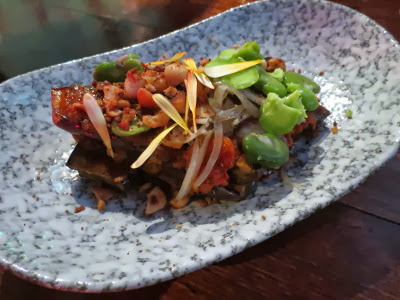 It was nice to get something a bit fiery at this point - my expectations of Sichuan food are basically all about oily, chilli goodness, so all the fresh and subtly flavoured salads had confounded me slightly. This was great - eggplant and chilli is such a winning combination that it's hard to go too far wrong.

To round out this second batch of four we scored crispy tofu with soy bean sprouts and nasturtium. 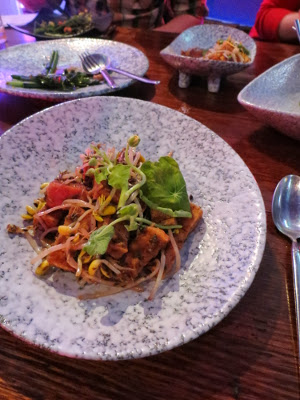 This took us back to nice light flavours where I was hoping we'd wind up staying deep in chilli town. Don't get me wrong: the tofu was excellent and the leafy herbs and sprouts were nice, but I was hoping for something with a bit more kick.

We got a bit closer with the next batch of dishs. The casserole style tofu with wild coriander had a nice gluggy puddle of chilli oil which warmed my heart and my mouth. 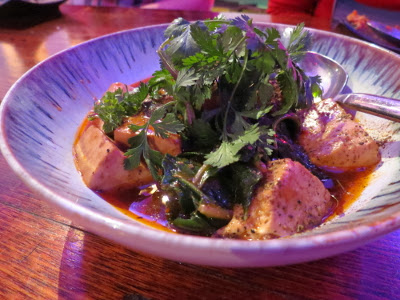 Similarly, the mustard greens with chilli had a good solid kick (particularly if you gulped down the raw chilli chunks). 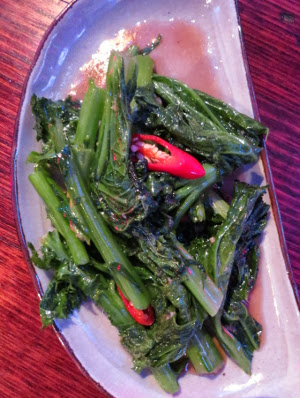 We also had yet another dish that was basically greens - broccoli and cauliflower with loads of garlic. The one downside to Shu's emphasis on fresh, in season produce is that it gets a bit tricky to pump out a dozen varied courses. 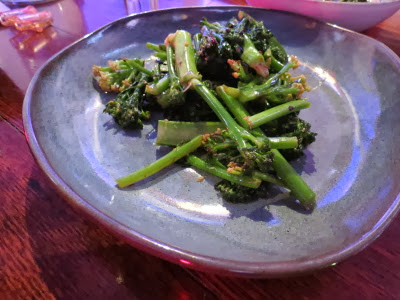 This wasn't a bad dish at all, it was just the cumulative impact of all the greens was a bit much for us all by this point in the meal. But just as things were starting to sag a bit, the Shu experience was capped by the two standout dishes of the night: noodles with asparagus, preserved mustard greens and the most delectable walnut infused oil, then potatoes with chilli and Middle Eastern spices. 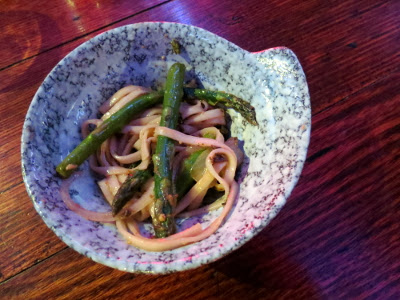 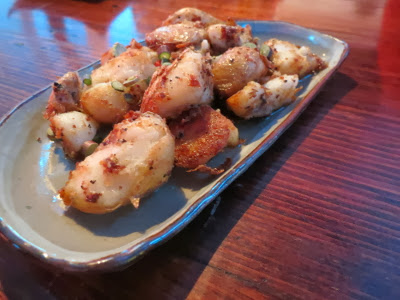 The table went strangely quiet at this point as the four of us savoured these last two dishes. The noodles were just incredible - I would gladly order a full meal sized serve of them if that was ever an option. And regular readers will know that fried potatoes are pretty much top of the tree in where's the beef? land. And these were some damn fine fried potatoes, with a solid amount of chilli and a nice blend of other spices to broaden things out.

We had such a great time at Shu - lovely company (even if Steph has slandered my good name at the end of her review of the evening), a dazzling array of food and excellent service. Looking back over this post it's clear that Wednesday night at Shu is an incredible deal. For $40 you get 13 courses of thoughtful, fresh and exciting food. $40! That's basically the same price as a couple of cafe breakfasts these days. I'd probably agree with Steph that things could be a little on the spicier side (although Cindy may argue the other way) but there is very little to complain about. We'll give things a month or two to let a few different ingredients come into season and then head back to see what fresh delights Shu can come up with.

Steph has already reviewed our visit at vegan about town, while Tempeh Tantrum has enjoyed a couple of vegan meals at Shu on their non-degustation nights.

There are a couple of earlier positive reviews from around the time that Shu opened on melbourne gastronome and Tickling the ivories.
____________


Accessibility: There's a small step on entry. The interior is spacious but dimly lit. There's full table service. The toilets are unisex and not too cramped, but there's no specifically accessible toilet.
Posted by Michael at 8:12 am