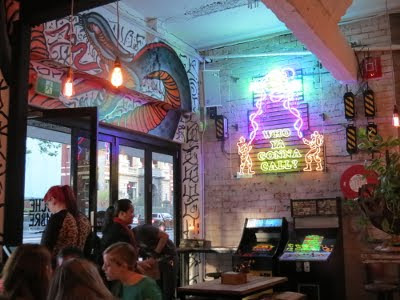 The hype around Touché Hombre has been building for months - Melbourne's love affair with Mexican food is so intense that any vaguely trendy place with tacos on the menu is instantly the hottest ticket in town. After reading of massive queues and hour-long waits for a table, we'd been giving Touché Hombre a wide berth. But, with an early Monday night dinner on the cards, we decided it was worth at least giving it a shot. And it worked - turns out if you rock up at 6pm on a Monday night then Touché Hombre will have a table for you. Score.

The fit-out is pure hipster-bait: neon Ghostbusters signs, Streetfighter 2 arcade games, a bit of graffiti on the walls, moody interior lighting and a massive, well-stocked bar. Throw in stylish staff and a DJ booth in the corner, and it's no surprise that people are piling in enthusiastically. The drinks menu is suitably diverse - I stuck with one of the many beers on offer, while Cindy tried a pomegranate and Tahitian lime snow cone ($6.50, or $15.50 if you opt to slosh tequila on top). It was fun but pretty hard going as a drink, too thick and icy. 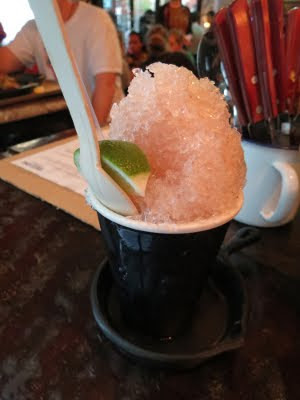 We got a bit lucky menu-wise: it turns out Monday is "Livin' on the Vedge" night, with a couple of bonus meat-free tacos on the menu. They're all gluten-free and the chefs are "happy to vegan-ise dishes" - yep, they actually said veganise. We decided to try one of everything, a grand total of six different veg tacos. (We actually ordered the five on the special menu and ended up scoring a free one due to some sort of kitchen confusion.) 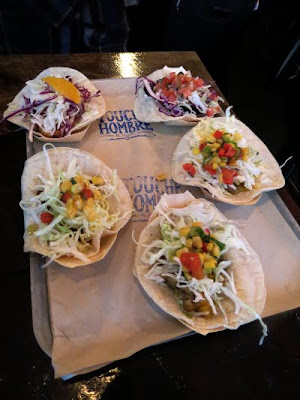 Only the breakfast taco, the mushroom and the tofu tacos had particularly distinctive flavours, with the others more or less dominated by the cabbage, corn and tomato salad they were served with. The ingredients all seemed fresh and interesting but the overall result just lacked a bit of punch - I was soon loading them up with the handy hot sauce. At $6.50 each they were a smidgen small as well.

Luckily we were leaving a potential highlight (and the main reason I could convince Cindy to visit) to last: the ice-cream sandwiches! There are four on offer, or a seleccion de los tres. We went with the random selection of 3 ($18.50), which came out much bigger and more impressive-looking than I was expecting. 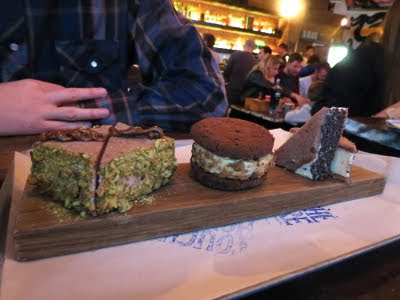 Our three included a cookies 'n' cream (far right, with pop-rocks!), a chocolate peanut cookie (middle) and a dulce de leche-topped strawberry-pistachio parfait (left). The cookies 'n' cream and dulce de leche were both pretty tasty and easily halved for sharing, but the standout by far was the choc-peanut cookie - it hit the kind of highs that I was hoping for from the entire Touche Hombre experience. Everything was perfect - rich peanut butter ice-cream with extra crunchy nuts and fantastic, messy dark chocolate biscuits. The best thing on the menu by a distance.

So our experience of Touche Hombre was pretty mixed - the food was fine without being amazing, the atmosphere was straddling the fine line between enjoyably and painfully trendy, and the staff were friendly if a little hapless (we had a series of drinks brought to our table that sadly belonged elsewhere... our own took longer to arrive than the food). I'm not sure we'll be joining the queues for a revisit but if you're after an early weeknight dinner (and not in the mood for junk-food or dumplings), it might be worth swinging by.

People are pretty positive about the Touche Hombre experience, with positive reviews at Petit Miamx, You're Dripping Egg, grazing panda, The Juliet Report, goodmateseating, The Glutton and the Lush, The Very Very Hungry Caterpillar, SLIM, The Hungry Grub, ReneeLeah, Good Food, Good Mood, jaque eats world and dude food, it's for dudettes too. Only Foolish for Food and dining nirvana have been a bit unimpressed. There are a bunch of reviews from bloggers who were invited to a special opening event, although how their experience relates to that of a random punter isn't especially clear - see: Eat. Play. Shop., Off the spork, I Eat Therefore I Am, The Chronicles of Ms I-hua, The World Loves Melbourne and Popcorn & Toast.

Accessibility: There's a single small step at the entryway and the interior is dark and pretty crowded. There's full table service. We didn't check out the toilets.
Posted by Michael at 9:57 pm