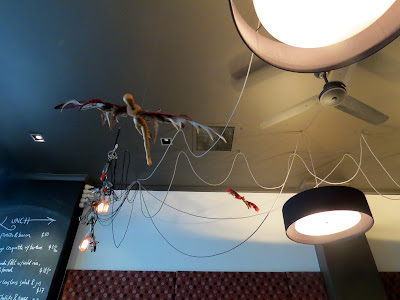 It's time that we withdraw our support of Birdman Eating. We've had some nice breakfasts there over the years but our dinner visit twelve months ago was underwhelming and a workday stop by last week really disappointed.


At that time of the morning, their few other customers weren't seeking more than coffee so we easily nabbed a table and a waiter's attention. The menu looked good, with plenty of sweet things for me to choose amongst and several varieties of their famous baked eggs for Michael. What was baffling and really inconvenient was the wait. Though the kitchen staff didn't seem otherwise occupied the food took 40 minutes to arrive, leaving Michael no more than 10 to slam down his eggs and scoot out the door for an appointment. 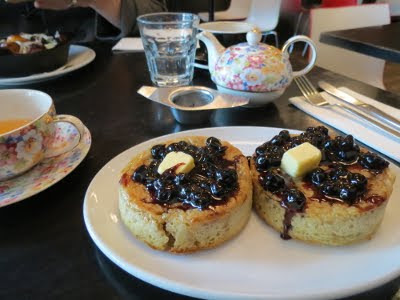 The dishes weren't quite up to scratch either. The waiter assured me that I could get the house-made crumpets ($9) with jam instead of honey, but it seems the chef forgot and I received my dense, crusty crumpets with both. The effect was far too sweet and confirmation of why I didn't want the honey in the first place. 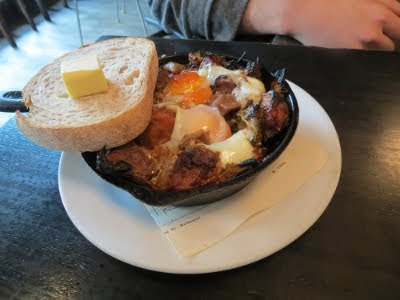 Michael chose the baked eggs with Szechuan vegetables ($14), though he subsequently decreed there to be nothing Szechuan about them and didn't even finish the plate. That's a rare, rare occurrence, folks.


The menu still looks appealing and we found the wait staff pleasant, but I'm no longer convinced that the Birdman Eating kitchen can follow through. The rest of the blogsphere seems pretty ambivalent too.
____________


You can read about one, two, three of our previous visits to Birdman Eating.

Accessibility: Tables outside are on a sloping footpath. There's a small step on entry and tables inside are a little crowded. There's full table service. We didn't visit the toilets.
Posted by Cindy at 9:44 am