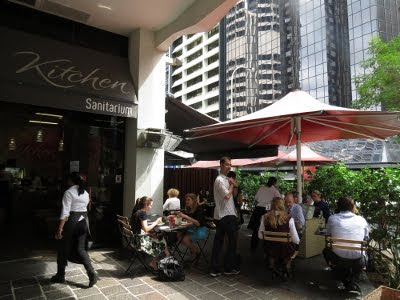 Once my work obligations started up I was surrounded by omnivores, but two of them indulged me in a visit to vegetarian lunch spot Kitchen Sanitarium when I discovered it was just around the corner from us. I was only three years behind Michael!


Back then, Michael noted that they weren't making much of an effort for vegans. Now the menu marks vegan items more clearly, along with anything that's gluten free, nut free, superfood (*eye-roll*), low GI or gluten-free optional. The overall theme of wholesome, mock meat-free dishes seems to remain - each standard menu item is captioned with its nutritional properties. The soup of the day, sandwiches and small salads come in around the $10 mark, while the curries, risotto, chilli and fancier salads approach $20. 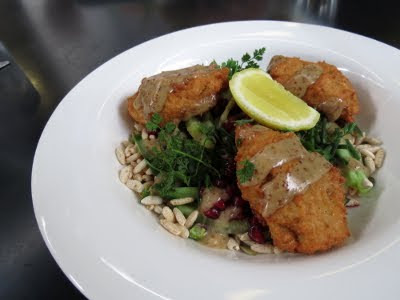 I was feeling extravagant and ordered the chickpea and chilli fritters, which were served on a salad then drizzled with a honey-mustard dressing ($18.50). Everything was perfect on texture but trailing on taste. The fritters were under-seasoned, like completely unadulterated chickpeas. No chilli. The salad was a charming mix of light and crunchy puffed rice, sour pomegranate seeds, fresh vegetables and herbs, nuts and seeds. I enjoyed picking out each individual flavour, but they didn't mix meaningfully. Meanwhile my companions reported only good things about their soup and haloumi roll.


The Kitchen Sanitarium setting is perfect for a workday lunch, casual with lots of well-shaded outdoor tables. They appear very popular for lunch, though they pack up quite promptly at 2pm. The Kitchen clearly prides itself on a nutritious menu that will sustain people through the day, and at the cheaper end of their menu they look like reasonable value too. However my pricier plate didn't quite live up to the high standards that Ottolenghi has set in my own kitchen.
____________


You can read about Michael's visit to Sanitarium Kitchen here. Since then there've been positive write-ups on blogs DolceBunnie, miss morag's morsels, Hungry Kittens, Edesian Feast and Eat, Peggy!.
____________


Accessibility: There appears to be ramp access to Sanitarium Kitchen from street level. Tables had medium spacing and were movable. We ordered and paid at a low-ish counter, then food was delivered to the table. We didn't visit the toilets.
Posted by Cindy at 7:16 am