Lord of the Fries VII 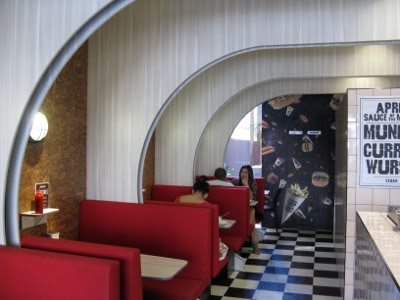 Vegetarian burger chain Lord of the Fries is continually evolving. Last winter they introduced a diner-style outlet on Chapel St, this March they've brought a similar store to Brunswick St, Fitzroy (which we were thrilled to discover open after 11pm on a Thursday night) and they've expanded their menu too. We dropped by the Brunswick St and Melbourne Central stores last week to sample some of the newer items. 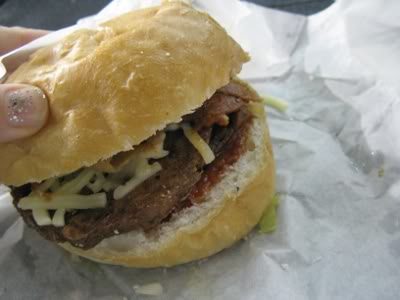 The burger options have increased to six - there's now a non-mock Guru burger, while the popularity of the limited-time-only Parma burger ($7.95 for 'big', pictured above) appears to have earned it a more permanent place on the menu. It's not difficult to work out why, with mock chicken patties smothered in Napoli sauce and cheese, topped with bacon. I don't like the diced raw onion but that's a matter of personal taste. 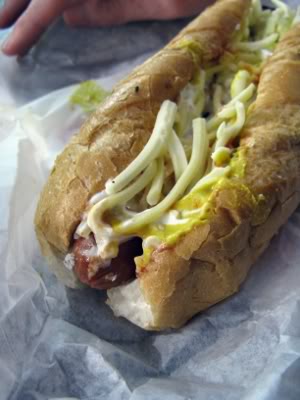 Hot dogs come in four varieties and two sizes. Michael trialled the big Tijuana ($7.95) with veg bacon ($1 extra) - he dug the spicy, sauce-heavy combination of jalapenos, cheese, onion, sour cream, ketchup and mustard, and highly recommends you too spring the extra for bacon. 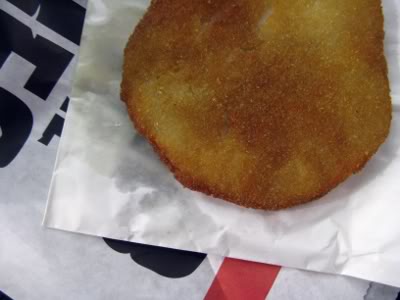 LotF has more sides on offer than ever before. Vegos nostalgic for a certain fast food chain (Danni among them) have been thrilled to see coleslaw and potatoes with gravy made vegan-friendly. I kinda liked the idea of potato cakes ($1.95, pictured above) but the reality is too greasy and definitely needs sauce. 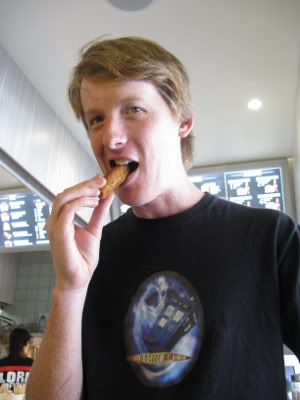 Chilli poppers, stuffed with vegan cheese then crumbed and deep-fried, are fun and pack enough heat but at $3.25 each their price is punchier still. 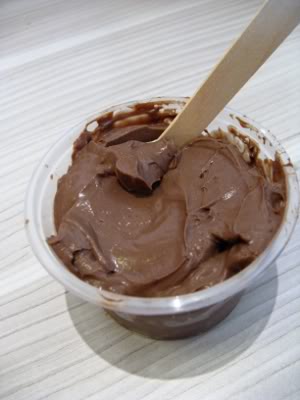 I was similarly surprised to see a small tub of chocolate mousse cost $3.95, but it's actually very rich even in this quantity. It's got a lovely smooth texture and sweetness about it, but it's short on the cocoa and I could taste the soy. Some will love this, though it's not quite my style.


It's great to see Lord of the Fries regularly redefining veg junk food - while not everything hits the mark, I admire their adventurous and flexible approach to menu development.
____________


We've reviewed a number of Lord of the Fries outlets one, two, three, four, five, six times. It's beloved by veg*ns, appearing recently on crosslegged on the front lawn, The Vege-Table, Veganise This, Louise, by Degrees, Vegawesome and Vegan SJ. A post on Backyard Activist indicates that it's a favourite of the Sea Shepherd crew too.

Positive reviews also appear on omni blogs Foreign Food Affair and new international students. Raging Cravings think these are the best fries in Australia, while Eat, Cook, Drink pitched them against their Chapel St neighbour Hooked and deemed them second best of the two.
____________


Accessibility: The Fitzroy store has a standard-width door and (we think!) a ramp to enter. Front tables are moderately crowded but movable, side booths are comfy but less flexible. Ordering and payment takes place at a high counter. We haven't visited the toilets.
Posted by Cindy at 9:08 am