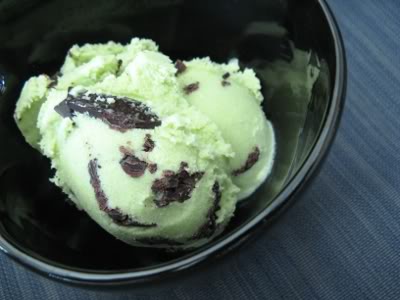 Johanna GGG loves green, observing traditions and the history of Great Britain and its neighbours. It's no surprise then that she's fond of St Patrick's Day! This year she belatedly honoured the day by hosting a potluck, asking each attendee to bring something green and vegan to share. Michael tossed up a bowl of green couscous while I pulled out an icecream recipe that K shared around last year.


This is mint choc-chip icecream with more than just a vegan twist - it's tinted green with spinach. I began tentatively, removing the stems from the couple of tablespoons of spinach leaves as directed and placing them in my food processor. It did little more than roughly chop them, so I moved on doubtfully to the spice grinder. Not much more joy until I added a little of the coconut milk - the spinach liquified before my very eyes! The green milk tasted mild enough and I grew more bold, ultimately blending in a full cup of spinach leaves for a lurid green hue. A large dose of agave nectar and generous dash of peppermint essence completely swamped its flavour, while the remaining coconut milk diluted but didn't destroy its colour.

I've never had much luck with choc-chips in icecream - they tend to harden and lose their flavour as they freeze - so I experimented with Ice Magic. Drizzling it in a couple of layers through the freshly churned icecream I wondered if I should leave it be, then lost my cool and hacked at the set chocolate with a spoon. My loss was this icecream's gain, just look at those thick chocolate chunks in the photo! And they melted into a sweet cocoa pool on the tongue. Finally, choc-chip mission accomplished.


I've developed an unexpected affection for mint choc-chip icecream in the past few years, and this one sets a high standard. The only thing stopping me from settling right here is the notion that fresh mint might blend up just like that spinach did...
____________

You can see other accounts of this potluck (with photos of the full spread!) on Laws of the Kitchen, Green Gourmet Giraffe, Soya & Chocolat and Veganise This.
____________

Surprise mint choc-chip icecream
(adapted from a recipe on In The Mood For Noodles,
where it's credited to gluten free easily)


Blend the spinach leaves together with 1/4 cup of the coconut milk to form a smooth green liquid - we have a spice grinding attachment that achieved this but a standard blender should probably work. Strain the liquid if you're concerned about any remaining spinach clumps. Mix in the remaining coconut milk, then the agave, peppermint and salt. Taste and adjust the flavour balance to your preference, remembering that sweetness tends to dull in frozen foods. Chill the mixture thoroughly, then churn it in an icecream maker according to the manufacturer's instructions.