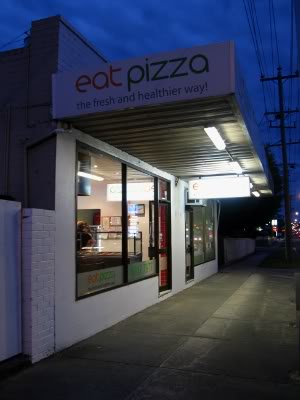 We were at a loose end on a Sunday and I was in the mood for pizza. Browsing the internet, Michael suggested we try a newbie like Queen Margaret or The Moor's Head, but I was in the mood for something less refined. With Plush Pizza now just a wistful memory, I convinced Michael that we should revisit Eat Pizza - it offers the suburban Aussie toppings I had a hankering for.
Eat Pizza's basic menu is pretty typical - Hawaiian, Capricciosa and Meat lovers pizzas, gourmet chicken, meat and seafood options, garlic bread, a few pastas, salads and desserts. So's the decor - toppings and oven visible from the counter, plastic furniture for those choosing to eat in, and the TV in the corner was blaring a fawning celebrity interview on 60 Minutes. The big draws for us pesky-tarians are the gluten free bases (which K gives a coeliac thumbs-up), vegan cheese, vegan salami and vegan ham that can be substituted for a few extra dollars. Despite the veg*n bent of online reviews, it would seem that we don't form the bulk of Eat Pizza's customers. Our friendly cashier looked unpractised at entering our veg-adapted orders into the register, eventually correcting the dockets by hand.

The "Fresh and Healthier Way!" tagline is curious. While they previously advertised wholemeal bases, there's no hint of them on the current Eat Pizza menu. (We're not sure whether wholemeal is now the only base offered or it's instead disappeared.) An Emma & Tom's ad was perched in the dining area, yet the fridge was stocked with sugar-laden sodas, 'vitamin waters' and icecream. 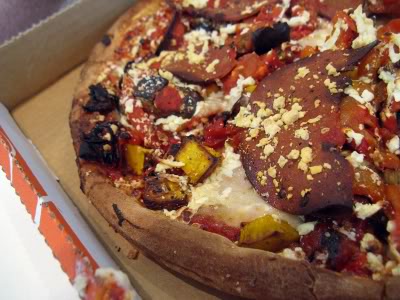 Never mind. We were here for pizza. Michael's Vegie Delight (medium $12) with vegan salami ($2.50 extra), was a little charred and laden with tomato sauce, eggplant, pumpkin cubes, roast capsicum, semi dried tomatoes and fetta. He loved it in all its semi-gourmet glory. 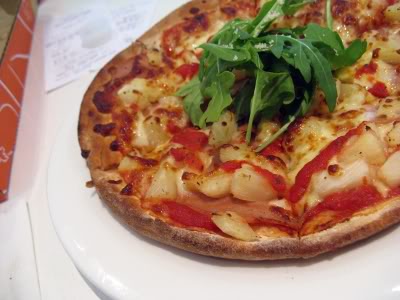 My small Hawaiian pizza ($8 + $2 for vegan ham) took a little longer to arrive. Worse, it arrived with real ham. Once we cleared up the misunderstanding the staff were very apologetic and whipped up a replacement promptly, serving it with a garnish of rocket and a second sincere apology.
This pizza was everything I wanted - sweet, juicy canned pineapple, salty 'ham' and judiciously portioned mozzarella and  tomato sauce on a medium-thick not-too-oily base. The stuff of an Aussie childhood.
It's awesome that Eat Pizza extend that Aussie-style pizza experience to veg*ns and the gluten-intolerant. Just be careful to double-check your order up-front!
____________
You can read about our first experience with Eat Pizza here; that same evening was also blogged on Lisa Dempster and The Fairest Feed. Since then they've impressed more of the veg community, including Vicki Vegan (who visited the Glenroy store), In the Mood for Noodles (twice), and Around The World Vegan. There's a more ambivalent review on Eat More Vegies.
The only omni review I found is on Footscray Food Blog; another rave.
____________
Eat Pizza
44 Raleigh Rd, Maribyrnong (other stores in Footscray and Glenroy)
9317 7977
veg pizzas $6-15, with extras $2-3 each
http://www.eatpizza.com.au/


Accessibility: There's a small step on entry but plenty of room inside. It's very loud, even in the absence of other customers. Ordering and payment takes place at a low counter. Toilets are gendered but flat and roomy.
Posted by Cindy at 8:58 am