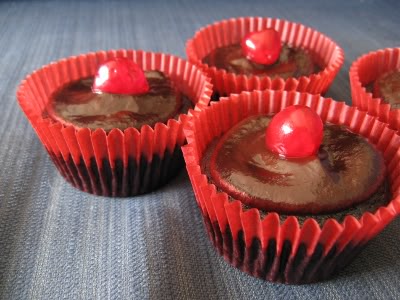 We spent much of last Saturday hanging out with friends, in our home and in others'. To ensure we had something to nibble at with those cups of tea and glasses of wine, I was inspired to bake for the first time in a while. These cupcakes sprang almost entirely from pantry supplies - just the almond milk was bought specially - and from a couple of the basic recipes in Vegan Cupcakes Take Over The World.
With two kinds of cherries cluttering the cupboard I went for a Cherry Ripe kinda vibe, folding dried cherries into the chocolate cake batter, supplementing the flour with shredded coconut and popping a glace cherry on top of each ganache-spread cupcake. The ganache is so easy to make (no double boiler for the chocolate!) and so easy to spread thickly and smoothly. (I've used and raved about it once before; it really is something.) I also made a straight-forward switcheroo between wheat and gluten-free flour.
These were very nice indeed! I erred just on the side of under-baking them to keep them moist, and for a gluten-free recipe they had plenty of springy-ness. I only wish I'd had dessicated rather than shredded coconut on hand. The coconut was strangely crunchy, and I've found that a finer grind tends to meld into the batter better.


In a large bowl, whisk together the milk and vinegar, then give them a few minutes to curdle. Add the sugar, oil and vanilla, beating until frothy.
In a separate bowl, sift together the flour, cocoa, soda, baking powder and salt; stir through the coconut. Gradually add these dry ingredients to the milk mixture, beating as you go. Fold in the dried cherries.
Spoon the mixture into the cupcake liners and bake for 15-20 minutes, until they pass the skewer test. Allow the cupcakes to cool completely.

To make the ganache, bring the milk to the boil in a small-medium saucepan and then take it off the heat. Stir in the chocolate and maple syrup immediately, until the chocolate is completely melted and the mixture is smooth.

Spoon the ganache onto each cupcake, using the back of a spoon to spread it out. Pop a glace cherry onto the middle of each cupcake to garnish.
Posted by Cindy at 9:26 am