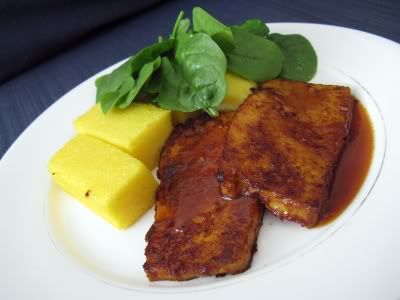 Cindy and I spent Melbourne Cup day eating at Cafe la Terra and rockin' out at the Tote, reliving our lost youth to the sounds of Snout and Even. While we were there we grabbed a copy of ToteZine #32, which unexpectedly featured recipes! Julian Wu, Melbourne gig-goer extraordinaire and fixture behind the bbq at the Tote, included a couple of his favourite bbq recipes. We decided to to recreate the experience at home - minus Ross McClennan swinging from the rooftops and Wally Kempton singing Fleetwood Mac songs.

We had two WuBQ recipes to work with, one of which required vegetarian-ising. We turned his barbecued chicken wings into barbecued tofu - it was just a straight swap, the marinade stayed as it was. The tofu we had didn't soak up the marinade quite as much as I imagine chicken would, but it still ended up rich with sweet, smoky bbq goodness (especially after we poured a bit of the leftover marinade on top). The use of Milo and coffee in the marinade added a bit of depth to the ketchup-based sauce. It was all pretty sweet, but the liquid smoke and tabasco added enough salt and spice to make for a pretty successful sauce.

The polenta was very simple - just polenta, stock and cheese. It was tasty enough, but really benefited from having the tofu's accompanying sauce on hand to soak up a bit of extra flavour. With a handful of greens on the side, this was a simple rock 'n' roll treat for a busy school night. Julian Wu, we salute you.

Mix the marinade ingredients in a saucepan over low heat, stirring until the Milo and coffee have been dissolved into the mixture. Take it off the heart and allow it to cool.

Slather the tofu in the marinade and leave it to soak overnight.

Heat a teaspoon of the oil up in a frying pan (we don't have access to a bbq, but go ahead and use one if you've got it) and cook the tofu over medium heat for about 15 minutes, turning a couple of times. It should brown up nicely, but make sure it doesn't burn.

In a large pot, bring the stock to the boil. Reduce it to a simmer and gradually pour the polenta in, stirring constantly. Cook over low heat, stirring the whole time, until the polenta has absorbed all the liquid and is nice and thick.

Take it off the heat, stir through the grated cheese and keep stirring until it's melted through. Pour the mix out into a baking dish, leave to cool and then cut it into strips. When you're ready to eat it, cook it under the grill for about 5 minutes on each side (keep a close eye on it, you want it to go a bit brown and crispy but not burn).

Serve with the bbq tofu, a few spinach leaves and a spoonful or two of leftover marinade.
Posted by Michael at 11:02 am