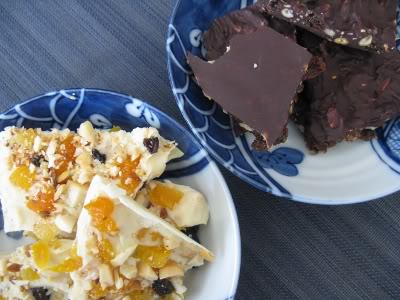 My family is pretty casual about Christmas (see, for example, last year's menu of pizza and icecream) so I went low-key when planning dessert for our lunchtime picnic.  After flicking through a few cookbooks I found the perfect things in the dessert-focused Tempted.  This book was a Christmas gift from Michael's brother Matt a few years ago, which made it even more perfect.
I've played around with the basic fruit-and-nut-chocolate idea many times before but these recipes, for rum and raisin bagatelles and white chocolate bark, used combinations I wouldn't have thought of myself.  Even better, they made use of white chocolate, raisins, currants and shredded coconut left over from our Xmas party dishes. 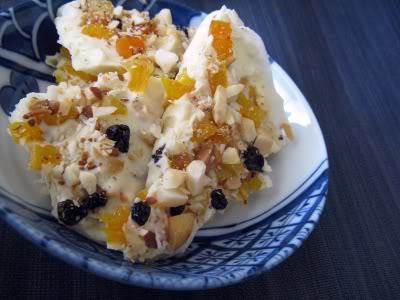 I was particularly pleased to use up the white chocolate, as Michael and I don't much enjoy eating it on its own.  We did not expect the white chocolate bark to be our favourite of the day but it was the picnic's prom queen.  It's sweet, sure, but the apricots were tangy and the roastedness of the macadamias added a little depth. 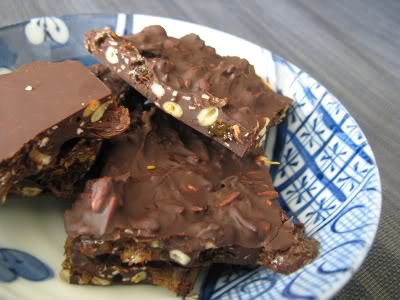 Rum and raisin is an old favourite combination of Michael's yet not one I'm fond of.  But there we were with raisins and even white rum in the house so I soaked those raisins, melted some dark chocolate, and stirred through some shredded coconut and pine nuts as directed.  Yes, pine nuts!  I was intrigued and, sadly, disappointed.  All the pine nuts around seemed a little stale and there were too many of them here.  If I were to make this again (and I'm pretty sure Michael would like me to), I'd double the rum and raisins and halve the quantity of pine nuts.  I still believe they've got a 'lil something to contribute.
The rum and raisin bagatelles were supposed to be shaped into haphazard little balls but they pretty ugly to boot, and I decided to mimic the first recipe and form an equally ugly but much less fiddly sheet of chocolate to break into tiles.  It might be prettier, on reflection, if half of the pine nuts and/or coconut were reserved for sprinkling on top.  No one was too fussed on Christmas day, though - we had a very pleasant couple of hours lazing and grazing in a nearby park, prioritising relaxation over presentation.


White chocolate bark
(a half-quantity of a recipe in Tempted: 150 Very Wicked Desserts)

Preheat an oven to 180°C.  Line a tray with baking paper and spread the macadamias over it.  Roast the nuts until lightly browned, just 5-6 minutes, and give them a couple of interim shakes for even cooking.  Set the nuts aside to cool, reserve the tray and paper for the chocolate.

Rum and raisin tiles
(adapted from a recipe in Tempted: 150 Very Wicked Desserts)

Stir the rum through the raisins in a small bowl and leave them to soak for at least an hour.

Preheat an oven to 150°C.  Line a baking tray with paper.  Spread the coconut over the tray and gently toast it until golden, 5-10 minutes, giving the coconut a couple of interim shakes for even cooking.  Set the coconut aside and use the same method to gently toast the pine nuts.