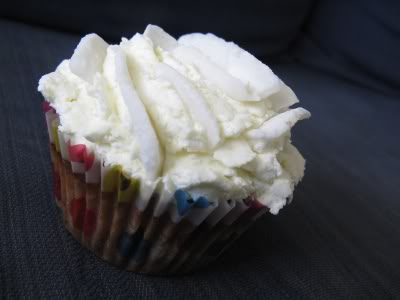 Recently my dear and distant friend Katy gave me Vegan Cupcakes Take Over The World.  This proves her to be both generous and clever - the cookbook is by Post Punk Kitchen's Isa Chandra Mockowitz and Terry Hope Romero, authors of other such favourites as Viva Vegan, Vegan Brunch and Veganomicon.  (This gift idea was no doubt sparked by the delightful baking day we had last time Katy travelled south to visit me.)
I was so excited to receive it in the post that I seriously considered making something that very night, which was a terrible idea (I had other foods and chores to attend to).  But I made a point of trying it out the very next weekend, choosing the coconut lime cupcakes both because they looked wonderful and because I had limes and shredded coconut to use up.  I did a fair bit of adapting to suit our situation:
This yielded five large-ish cupcakes that suited my preferences well.  While the cake batter started out  an unappetising grey, it baked up with a pleasing golden crust and dense crumb; the icing wasn't excessive and had plenty of tartness.
I'm not the kinda gal to go gaga over the miniature, the cutesy or the fussy, but this first foray into Vegan Cupcakes hints that I'll have no trouble enjoying such things on my own terms.


Preheat an oven to 180°C and add some cupcake liners to a muffin pan (I used 5).
Melt the coconut oil in a small saucepan over low heat.  When it's completely liquid, transfer it to a mixing bowl.  Stir in the sugar, followed by the coconut milk, soy milk and vanilla.  Sift in the flour, baking soda, baking powder and salt, mixing everything until smooth.  Fold through the shredded coconut.
Spoon the cake batter into the cupcake liners and bake the cupcakes until golden on top and cooked through (you know the skewer test, right?), about 20 minutes.  Allow the cupcakes to cool completely before icing them.
To prepare the icing, beat together the margarine and icing sugar until light and fluffy.  Add the vanilla and lime juice and beat a whole lot more - at least 5 minutes.  Spread the icing onto the cooled cupcakes and garnish them with the flaked coconut.
Posted by Cindy at 7:17 pm