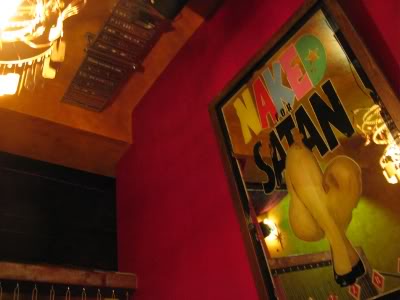 Naked For Satan has unsurprisingly attracted quite a bit of attention via blogs and tweets in the few weeks it's been open - that's what shiny new bars in trendy ol' Fitzroy do.  Though reviews have been very complimentary I must admit that I wasn't yearning to go myself; I'm not much of a drinker, nor one for sophisticated frocks or late nights out.  But our friend L invited us to join a group there on a Thursday night and I was happy to check it out in their company. 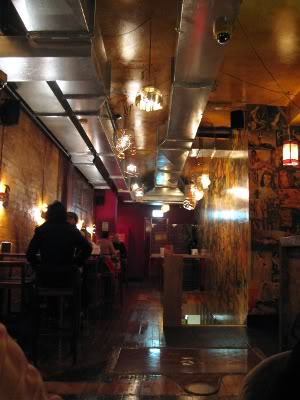 On entering I deduced that this bar is on the former premises of Filter cafe, though it's been dramatically renovated and offers much more space for patrons.  Yes, it's hip and a little pretentious, but seemingly not at the expense of comfort or intimacy - there are split levels and nooks, padded couches, generous round tables and high bar stools in various locations, as well as a bit of space to move and breathe (... at least at 8pm on a Thursday night.  There seems every chance that this could turn into standing room late on a Saturday). 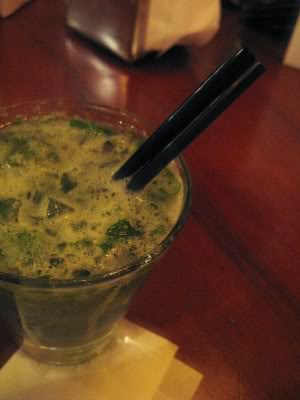 While I don't imbibe regularly I am partial to the occasional cocktail and, with Naked for Satan touting a range of infused vodkas, the cocktail menu was right up my alley.  This mojito-inspired drink contained violet-infused vodka rather than white rum, lending a nice twist without being too floral or soapy.  I happily nursed this all evening but if you're of a stronger constitution than I, you might even try the vodkas straight.  I hear that the chocolate one is rather special. 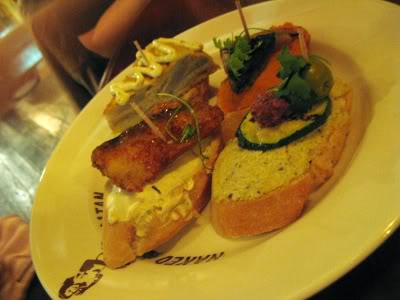 Of course, a bar's not going to win my love unless its snacks are any good; and boy, NFS's snacks are good!  I'd read the premise - you can serve yourself pintxos from the bar at $2 a pop, saving the toothpick inserted in each one and settling the bill as you leave.  Claire even mentioned that there were some vegetarian options.  Actually, there are a lot of vegetarian options - roughly half the menu on the night we visited was helpfully labelled with a little V.  (Do check for the Vs, though, as there are some veg-looking things with fish or pate or the like going on.) 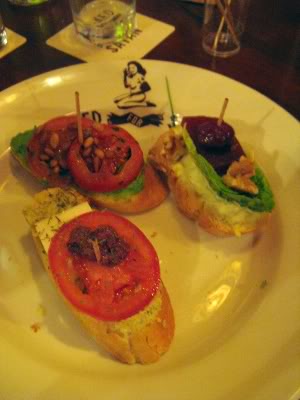 I can't vouch for their vegan-friendliness; most of the pintxos begin with a thick spread and many (though not quite all) of them would be cheese-based.  Then they're crowned with all sorts of goodies.  My favourites on our first plate were the Spanish tortilla and the sweet crumbed eggplant, on the second plate I was particularly impressed with the pea dip under the tomato and roasted pine nuts, and was always going to love the blue cheese, quince paste and walnut option. 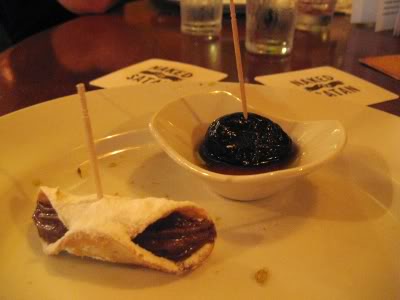 There are even a couple of dessert pintxos, though these didn't charm me quite so much as the savouries - a chocolate custard-filled cannoli and an armagnac-soaked prune. 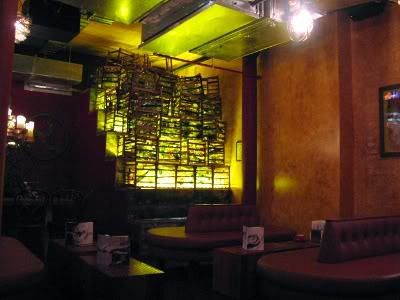 Naked for Satan held far more appeal than I had anticipated.  Though you're still unlikely to see me whooping it up there on a Saturday night, I'll happily return at a less party-like hour for more for their unique and affordable snacks.  And, if I'm feeling really crazy, maybe another vodka.
____________
You can read other accounts of Naked for Satan on ihavebonywrists, Melbourne Gastronome, Tummy Crumble and Food Fable.
____________
Address: 285 Brunswick St, Fitzroy
Ph: 9416 2238
Fully licensed
Price: veg pintxos $2 apiece
Website: http://nakedforsatan.com.au
Posted by Cindy at 11:44 am