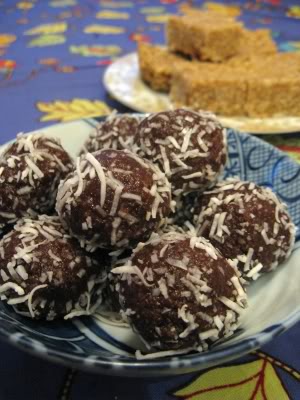 This year my Christmas baking wasn't baking at all - I went the melt-mix-chill route. It has much to recommend it: it's quick and simple and it doesn't get you too hot and flustered amidst the warm weather and general Christmas chaos.
My first priority was a gift for my step-grandfather, Max. He's been having some health problems in the last few months so I wanted to give him something tasty and treat-like that wouldn't be overly bloating or calorific. The date macadamia balls that Jo posted on It Ain't Meat, Babe seemed to fit the bill - my one-day foray into raw food proved the power of dates' sweet caramel flavour, and the creamy richness of ground macadamias. The bit of cocoa in this recipe only enhanced the treat factor. If I made these again just for myself, I'd sacrifice the sweetness and up the cocoa even further.
The second treat loitering fuzzily in the background is our old family favourite, bubble slice. It's appeared here in various guises before, and I'll dub this version the 'vanilla-vegan' one. Actually it doesn't contain vanilla at all, but rather is the plainest, bare-bones version of the slice without any added nuts, dried fruit or chocolate. The original recipe uses honey and butter, but I made the vegan- and pantry-friendly choice of substituting golden syrup and Nuttelex. In spite of these alterations the aroma of the peanut-butter caramel mixture bubbling on the stove took me straight back to my mum's kitchen. It remains a crowd-pleaser, going down equally well with my country-living, meat-eating brother and the inner-city vegan friends who dropped by for tofurkey sandwiches.

Macadamia-date balls
(based on this recipe from It Ain't Meat, Babe)


Blend the macadamias to a powder in a food processor. Add the dates and cocoa and continue to blend until the mixture forms a smooth dough.


Form tablespoons of the dough into balls and roll them in coconut. Store them in the fridge until you want to scoff them.

In a large bowl, stir together the rice bubbles and coconut.


In a small-medium saucepan, melt the Nuttelex, golden syrup, peanut butter and sugar. Bring them to the boil, then simmer for 5 minutes. Pour the caramel mixture over the dry ingredients and combine thoroughly. Press the mixture into a small baking tray, using the back of a spoon to smooth over the surface. Refrigerate until set, then cut into squares.
Posted by Cindy at 11:10 am