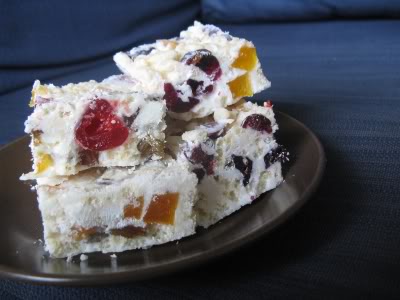 As I've discussed and demonstrated in previous years, I'm not one for Christmas traditions. The family group I spend the day with seems to get less traditional with each passing year, and consequently the customs of Christmas have been adapted or rejected along the way. I don't miss the traditional food - the monstrous hams, spiced biscuits and heavy puddings - so seasonally inappropriate, and nostalgic for a wintery European Christmas that few of us have even experienced.
One curious Christmas tradition is White Christmas slice. Though its name hints this it's another import from the Northern Hemisphere, this confection actually seems to be an Antipodean original. Super-sweet with icing sugar and (ergh!) glace cherries, White Christmas was very much on the periphery of my childhood Christmases. (I don't think my mum likes glace cherries any more than I do.) When it popped up as the December calendar recipe, I decided to try my hand at an alterna-Christmas recipe as well as honouring the original version.

The first thing to go, of course, was the glace cherries - and in with the dried ones I love so well. I'm not so into sultanas, either, so I introduced some dried cranberries to the mix. I find copha kinda disturbing so I replaced it with some less refined coconut oil. And remembering how super-sweet this slice typically is, I halved the quantity of icing sugar. Then I thought I'd try going the whole vegan hog by using coconut milk powder instead of its dairy analogue. This didn't work out quite so well as I'd hoped - the coconut milk powder I found at my local supermarket contains added sodium caseinate, a milk protein, and so does the soy milk powder. (Vegans - any tips on better brands or methods for replacing milk powder?). The resulting mixture was a lot mushier than the traditional batch, so I upped the quantities of 'milk' powder and rice bubbles.

So how'd they fare? Well, they both need maximum refrigeration to stay solid, with the coconut-oil based slice being the meltier of the two. In direct comparison, my 'improved' version was missing a little something - salt, I think. (Where the saltiness comes from in the original recipe I don't know. The dairy milk powder, perhaps?) And the traditional version tasted like... being a kid at Christmas. In spite of all the components I wanted rid of, I actually enjoyed eating this one a little more. Huh! Maybe there's a little more of the traditionalist in me than I thought.

Line a baking tray with paper.
In a large bowl, stir together all the ingredients except for the copha/coconut oil.
Melt the copha/coconut oil in a small saucepan, pour it over the dry ingredients and mix well.
Press the mixture into the baking tray, smoothing over the top with the back of a spoon. Cover and refrigerate the slice until set. Cut it into small squares (no more than an inch each side!).
____________

Purple Goddess has been writing some nice posts about traditions. You can read them here, here and here.
And while you're at it, check out the gift goodies that Another Outspoken Female and Fat Feminist Foodie have been making.
Posted by Cindy at 12:22 pm