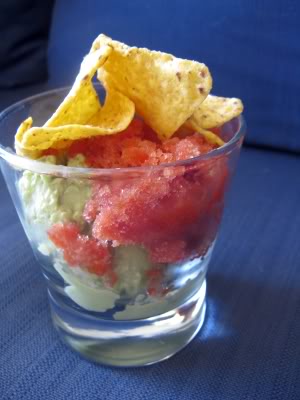 The last vegan potluck of the year was a picnic near home and there was particular enthusiasm for icecream. In anticipatory online discussions, one joke led to another and I started wildly promising savoury icecream. I think I was concerned that sweet icecream would be a molten mess by the time everybody was ready for dessert but I needn't have worried - these two iced boxes froze hard and I snapped one spoon handle and bent another on failed scooping, while everybody ate their fill of the other savouries, before this dish was ready.


The first savoury icecream I made was always going to be avocado. Several years before I began this blog I made a few controversial batches of gently sweet avocado icecream, studded with roasted hazelnuts. That recipe, from Gail Damerow's Ice Cream! The Whole Scoop, had an intriguing variation involving grated onion and yoghurt with a call to "pass the tortilla chips"! Curiously it didn't direct me to reduce the quantity of sugar, but I decided to tone it down from 2/3 to 1/4 cup. My taste testing confirmed that some sweetener did improve the overall flavour, so I'd advise against omitting it completely. Since it was a vegan gathering, I tried Nestle Carnation soy creamy cooking milk in place of dairy milk and cream. I think this product is intended as a direct replacement for evaporated milk and it certainly had the right look. I found its soy flavour very intense, though, so I'd only use it for dishes with other strong masking flavours.


For my second savoury flavour, I thought something tomato-based would be complementary and I fell upon a suitable looking sorbet in NPR's archives. I didn't have access to fresh tomatoes beyond tasteless supermarket ones, so streamlined the process with some canned produce instead. I hoped a blended fresh chilli might liven things up but didn't actually notice it at all in the frozen sorbet. Some balsamic vinegar adds a nice depth of flavour, though.


My savoury sundaes had a varied reception. Some people were curious and not entirely won over; others declined to try these at all. A few people nominated their favourite of the two flavours (I think the tomato sorbet was the more popular). I suspect that I actually enjoyed these more than anyone! Expecting the onion powder and chilli that distinguish these from dessert, I approached them as chilled guacamole and salsa dips and liked them most in combination with the corn chips. Even so, I'd recommend eating them in small serves... that is, if you dare to eat them at all!

In a food processor, blend the avocadoes until smooth. Add the lemon juice, sugar, salt and onion powder and blend until thoroughly combined. Taste and adjust the flavourings to your liking. Add the soy milk and blend further until evenly mixed. Refrigerate the mixture until it's very cold, then churn and freeze it in an ice cream maker.


Tomato sorbet
(inspired by a recipe at the NPR website)


In a food processor blend together the chilli, sugar, lemon juice and balsamic vinegar. Add the tomatoes and blend further until everything is well mixed. Chill the mixture thoroughly.

When the mixture is very cold, strain it. I spent 10 minutes or more squeezing as much liquid out of the tomato pulp as I could. Discard the pulp, then churn and freeze the liquid using an ice cream maker.


You can see other delicious picnic offerings over at Vegan About Town.