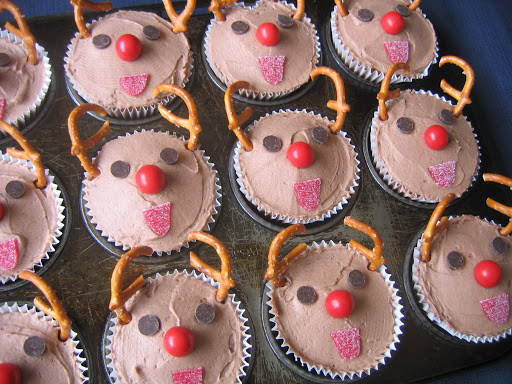 Christmas traditions have generally faded as my grandparents have passed on and the grandkids have grown up, but this isn't necessarily a bad thing. If anything we're better able to appreciate the food and company that does come together without any preconceptions. Three years ago, Michael and I turned up in Melbourne late on discounted flights, then spent the afternoon eating chips and avocado while watching DVDs with my brother, Mum and Mum's sister Carol. I don't think there were even any gifts or a decorated tree but the sense of togetherness was much more real than the photo stories Coles Myer would have us buy into all November.

This year we shared Christmas lunch with some of my Mum's family on the north side of Melbourne. It was a very Aussie barbie with bread and salads - for the hot plate, Michael and I brought along a lunchbox full of caramelised onions, and four enormous mushrooms brushed with balsamic vinegar and crushed garlic.

These reindeer cupcakes, also my doing, were dessert. I owe their look entirely to Melbourne's other food blogging Cindy, and their ingredient list almost entirely to Nigella Lawson. They're based on her burnt-butter brown-sugar cupcakes. The cake batter has a convenient throw-everything-into-the-food-processor method, but getting the burnt butter for both the cake and the icing is a bit strange. It involves heating and clarifying the butter, and Nigella promises that it'll be solid (albeit soft) in less time than it takes to preheat the oven. Even in 20 degree weather it took an hour in the fridge to do that. I reckon it would have taken all day sitting on the bench as directed! These were a tad greasy against the paper cases but otherwise great - light, moist cakes with buttery sweet icing and a hint of brown sugar. I'd use it again as a base for decorative cupcakes. However I ended up with about twice as much icing as I needed for this smooth finish, so consider reducing it by a third to a half. If you just want to thickly pipe or slather on the sweet stuff you might want the full quantity below.

And what made this Christmas really Christmas? Making up a bit of lost time with my cousins Seona and Trudy; getting to know Seona's almost-husband Phil and viewing Trudy's foray into film-making. Then watching Mum and three of her sisters muddle their way through a practice pitching of their new tent on the front lawn.

The day wasn't completely free of gifts either - in the post came a World in your Kitchen calendar from Michael's mum via Oxfam. Each new month will bring a new vegetarian recipe from Africa, Asia or Latin America, so we've a new theme to feature on our blog for 2008. Watch out for a Caribbean rice dessert in January!

icing: (reduce by a third to a half for smooth reindeer faces)
150g unsalted butter
1-2 tablespoons cocoa
250-300g pure icing sugar (I might try reducing this to 200g next time)
2-3 tablespoons milk
1 teaspoon vanilla extract

For the cake: Put the butter in a small saucepan over medium heat, stirring until it becomes dark golden. The milk solids should separate quite easily and rise to the top. Strain the butter to remove those solids - lacking a decent strainer, I also used a spoon to gently skim off more solids. Rest the butter until it's solid but still soft - I still reckon this requires a stint in the fridge.
Preheat the oven to 200 degrees C and line a muffin pan with 12 paper cases. In a food processor, pulse together all the cake ingredients except for the milk - stream it down the funnel. Drop the batter equally into the 12 paper cases, then bake for 15-20 minutes until a wooden skewer comes out clean.
For the icing: Repeat the butter clarification method above, perhaps before or while the cakes are baking. When the butter is cool, sieve in a tablespoon of the cocoa and about half of the icing sugar and beat together the buttercream. Beat in more sugar, cocoa and milk in turn until you achieve the colour and texture you want, then beat in the vanilla at the end.

For plain cupcakes, slather or pipe the icing on generously. To make reindeer faces, spread the buttercream thinly and smoothly over the cakes with a knife, ideally forming a seal with the paper cases over the cake. Arrange a face by pressing the lollies gently into the icing, starting with a red nose in the centre. Cut pretzels into the antler shapes pictured above and press them into the side of the cake. If your reindeer have to travel at all, you might like to store the decorating lollies (particularly the pretzel antlers) in a small container and decorate just before serving.
Posted by Cindy at 11:45 am

Labels: Dessert, How to be a Domestic Goddess, Internet-Sourced Recipe, Nigella Lawson