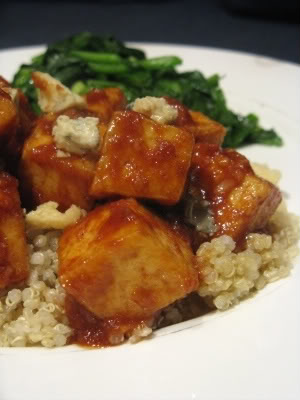 At last, we've reached the final entry from our 800th post giveaway! (Let the warmer weather begin!) Stru recommended the Buffalo Tofu recipe at Hungry in Hogtown, saying: "I made it as a quick dinner before heading out to a party, but made/ate way too much of it, and felt too full to eat the desserts at the party... and for me, that's really saying something!!" Yes, it really is saying something - I've been lucky enough to taste evidence of Stru's expertise in desserts.
Stru also noted that this is more of a guide than a recipe, and I agree that it's best used in that way. The tofu cubes are supposed to be deep-fried, and I almost deep-fried them using a generous pool of oil in a wok and lots of stirring, but I actually think they'd be just as good shallow- or almost dry-fried. The key is getting a crispy golden skin going. The Buffalo wing sauce, sourced from the Alton Brown, is a mixture of butter, garlic, hot sauce and salt. American-style hot sauces aren't so common here, so I took another tip from Stru and used our Chinese-style barbecue sauce as a base, adding extra garlic and butter. I really couldn't detect the butter in the dish and I doubt I'll bother with it again. The final touch is some crumbled blue cheese in the original recipe, which we also used, though Stru suggested mayo and sour cream as potential alternatives. I actually really enjoyed the pungent contrast of the blue, though I think the sour cream could be pretty neat too.

With all that frying and saucing going on, it was good to have a bed of mixed couscous and quinoa to soak up the flavour. We also served some sauteed spinach on the side, a slightly more wintery (and fridge-clearing) version of the "BIG fresh salad" that Stru wanted.
____________

See the original recipe at Hungry in Hogtown.
Posted by Cindy at 7:57 pm