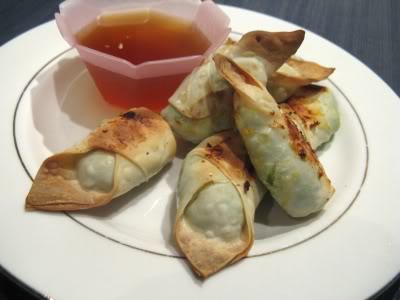 This may seem unnecessarily repetitious but if posting two pea dumpling recipes is good enough for Heidi Swanson, then it's certainly good enough for us! We've had an abundant supply of peas and wonton wrappers around here and we're not sick of either of them yet. While the previous recipe showed off its Indian influence via paneer and green chillies, this one takes a turn towards Euro-Asian fusion with parmesan and ricotta (actually, I went for the last quarter of a tub of thick cream instead).
Nevertheless, it partners prettily with the Asian-style lemon-honey dipping sauce that Will recommended on our previous post (though ours was actually sweetened with agave nectar). This sauce is mild enough to let some subtle cheesiness shine through, and its lightly acid edge keeps things lively. I might even have sipped the remaining sauce straight from the bowl once I was done with the dumplings. 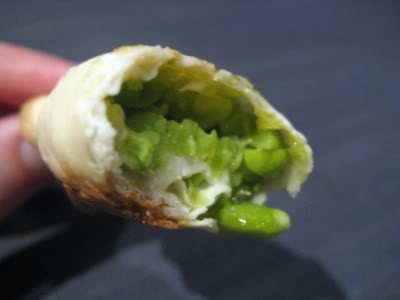 The best thing about this recipe is that it makes plenty - we've been able to ration those dumplings out over a couple of meals, storing them in the freezer. The worst is that it's a filling that's liable to burst out of any too-stretched skins. I fry-steamed the first batch Lucy-style and they were not pretty. The photographed oven-baked ones were less problematic, with plenty of crisp golden crunch but not much tenderness.
It's difficult to determine the ideal side for upsizing these dumplings to a full meal. The first time round I baked Brussels sprouts and za'atar-spiced cauliflower more as a fridge-clearing strategy than a food-matching one. I think I got it right on my second shot - the strawberry spinach salad, dressed with pomegranate juice/molasses and sesame oil and scattered with smoked almonds, was just the right brand of crazy-tasty confusion-fusion to hold its own against this irresistible snack.

Bring a small saucepan of salted water to the boil. Add the peas and cook them briefly, for only 1-2 minutes, until they're tender-ish.
Drain the peas and transfer them to a food processor. Add the cream, olive oil and salt then puree the lot until you get a texture you like (I left ours pretty chunky). Scoop the pea mixture into a bowl and stir in the garlic chive, parmesan and lemon zest. Taste the filling and adjust the seasoning to your preference.

From here you should fill, wrap and cook the dumplings by whatever method you prefer. I've tried wrapping half-moons, pleats, rolls, and the folded-round triangles you see above. To cook, you could try steaming, fry-steaming or oven-baking (with a little oil spray) these dumplings.

Whisk together all the ingredients until well combined.

Will also suggests topping the sauce with chilli slices, julienned ginger and/or crushed nuts.
Posted by Cindy at 7:49 pm