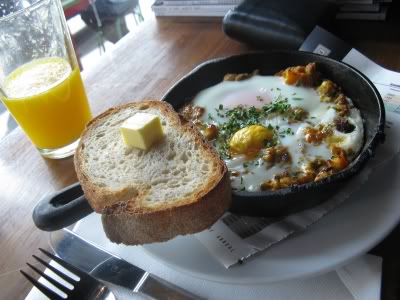 This was one of those unfortunate (but thankfully rare) Saturdays where Michael was obliged to spend a few hours at his Gertrude Street office. We agreed that breakfast at the nearby Charcoal Lane would soften the blow, though on arrival it became clear that they're not keeping to the 8am opening time currently listed on their website. (They did seem to have opened their doors by the time Michael backtracked from breakfast, though, so you can probably rely on them for a fine weekend brunch from 9am.)


While this was disappointing, Birdman Eating was an excellent consolation prize. We were surprised to see it overflowing with trendsters at this relatively early hour and were lucky to snag a spot at the front window. The menu doesn't appear to have changed much since our visit a year ago, offering plenty of novel (and veg-friendly) dishes with modest serving sizes and prices. The baked eggs, at least, seem to come in a rotation of different flavours and at the moment they're all vegetarian. Michael chose the chickpea, pumpkin and ras el hanout version ($12); the spice combination wasn't quite as explosive as he'd hoped but the eggs were cooked well and happily fuelled him through a productive morning. 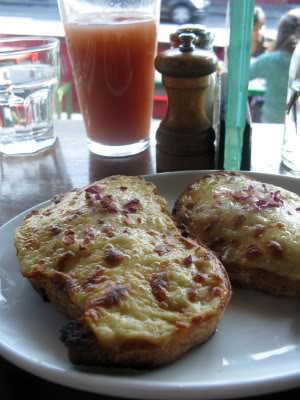 While I was tempted by the black rice pudding, I was compelled to try the Welsh rarebit ($8.50). It's unapologetically cheesy, though it also had a nice fluffiness and distinct hint of mustard. A raspberry juice was its perfect foil.


Birdman's still a lovely spot to commence a leisurely weekend (or in Michael's case, to add a pinch of leisure to a working weekend). It's no insiders' secret, though, as there's constant demand for tables throughout the morning and plenty of diners appear to have travelled from further afield than the local neighbourhood for a taste of Fitzroy.


You can read about our previous breakfast at this cafe here.
Posted by Cindy at 7:36 pm