Sunday brought me a mild red wine hangover, the residue from my cousin's engagement party on Saturday night. I was highly vulnerable to Michael's proposal of a cafe-cooked breakfast and suggested one of Truffle's recent recommendations, El Mirage. Though I didn't recall it at the time, the title of her post must have had an effect on me.
El Mirage has the typical terrace house width of so many Melbourne cafes but it offers a surprisingly large and open space indoors (which we needed on this wintery morning), with a clean retro-modern look that stands out amongst the trendy, cluttered and grungy cafes we so often find ourselves at. We were very pleased that a table for two was available right away, though as the clock drifted on towards noon, we witnessed a few other people regretfully turned away.

The savoury options are egg dominated and the suggested combinations have a lot of meat going on. Michael inquired as to whether he could order the Gringo breakfast without bacon and was refused permission - instead he built his own of poached eggs, toast, mushrooms, beans and home fries for $1.30 more ($16.30 all up). 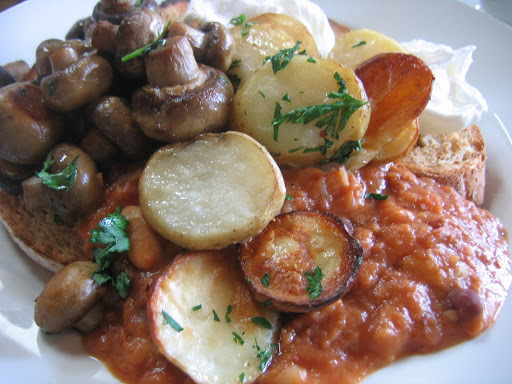 This was an enormous plate of food - I will pressure Michael to order only one or two extras with his eggs next time! Michael loved the beans, and the mushies and home fries (I tasted them) were so good that I thought I might order them next time we visit (this statement will astound you in its high praise when you read below what I ordered). The only drawback was overcooked eggs: 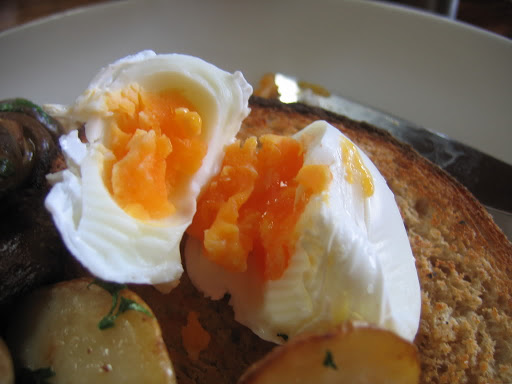 No slopping yolks around for Michael. Meanwhile, I was served probably the best tea and toast combo ever. Here's my soothing but cumbersome chai setup: 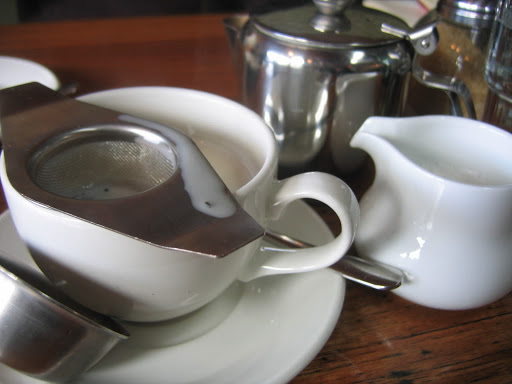 I'm sure a lot of people like the ritual of all the little cups and jugs, but it does take up a large proportion of a little cafe table. Anyway, here's what you really need to see, the Neapolitan ($7): chocolate and sour cherry toast with mascarpone. 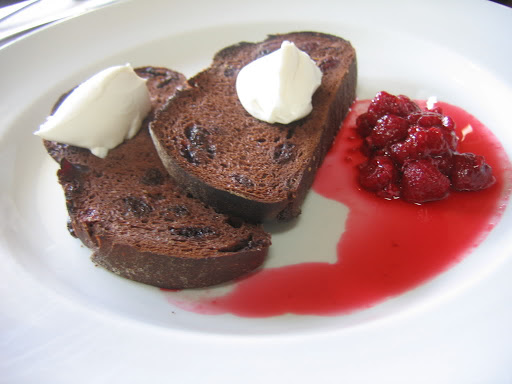 Now I've long been sceptical of the chocolate and bread thing, but this was fantastic. Rich and moist like a cake but with a bready crumb. The plump sour cherries inside and mascarpone on top were just perfect. The only strange element was the garnishing raspberries which were bitter and not at all fruity to taste. But this didn't detract from my ultimate dessert toast.

After our very indulgent breakfasts, Michael and I sought to make amends with an hour-long walk through Brunswick and then home. We were lucky to enjoy the couple of clear and mild hours that Sunday gave us! I returned home with a clear head and satisfied stomach. Despite a couple of imperfections it should come as no surprise that I'm keen to return to El Mirage: maybe next time I'll trade a plate of home fries for making the trip by bike.
Address: 349 Lygon St, Brunswick East
Ph: 9388 0966
Price: veg breakfasts $5-20
Posted by Cindy at 9:45 am