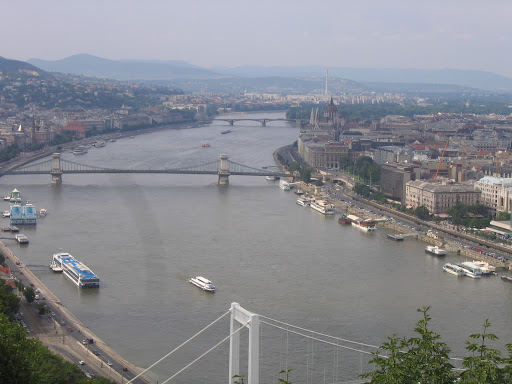 As Cindy mentioned in a couple of her recent posts, I've been swanning around Central Europe for the last couple of weeks - initially at a conference in Budapest and then a few days in Vienna and Amsterdam. And this is my reward, a blog post summarising the experience. I'll broaden out a little bit from the usual theme and include some trip highlights as well as the best food moments.

Budapest
The majority of the trip was spent in Budapest - the venue of the conference and a few spare days I'd booked in to recover from jetlag and generally see the sights. The conference venue (and hotel in which I was staying) was the Hotel Gellért, an impressive looking place which is especially well known for its indoor pool and thermal baths. Alas, there are no pictures from inside the baths - I'm not sure random Hungarians would enjoy being photographed with just their swimmers on, and I certainly wasn't going to have anyone take pictures of my stunning torso. 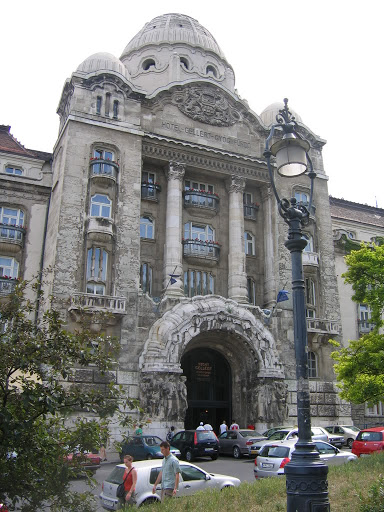 Budapest is a funny old city, much like the hotel, it's got a kind of faded grandeur. Lots of impressive old buildings, but everything's just a little frayed around the edges. It has a great 'lived in' feel. Some of the highlights:

The Hungarian parliament building - the largest and most expensive building in Hungary, which cost an obscene amount of money and took nearly ten years to build: 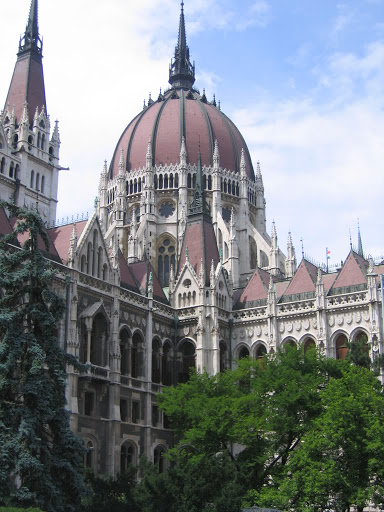 Saint Stephen's basilica - as tall as the parliament, but not quite as impressive. Named for St. Stephen, Hungary's first king, who converted the Magyar pagans to Christianity (or, failing that, had them killed): 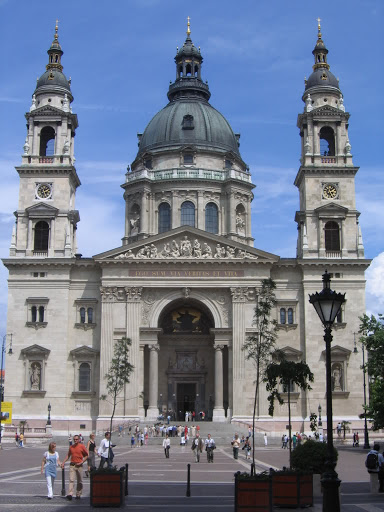 Statue Park - a small repository of some of the communist statues that dotted the streets of Budapest before 1989. The various communist monuments were taken down shortly after the communist regime fell and a few of the more impressive ones were set up in Statue Park as an open air museum. 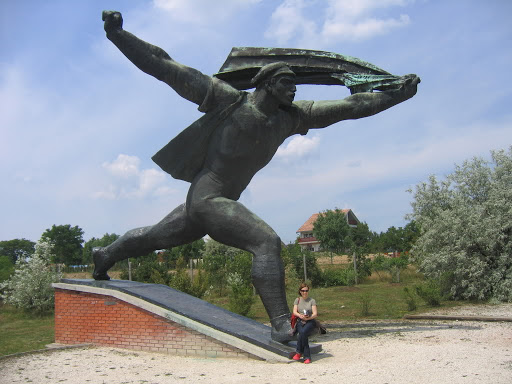 Hungarian food is not widely lauded for its vegetarian delights - beef goulash soups, pancakes stuffed with veal, chicken paprikash, a variety of sausages and a range of fish soups were commonly found on menus with only the odd pasta or mushroom stew catering for non-meat-eaters. Luckily, one of my co-conferencees was also a vego and had discovered Vegetarium (website in Hungarian), conveniently located just across the river from the hotel. 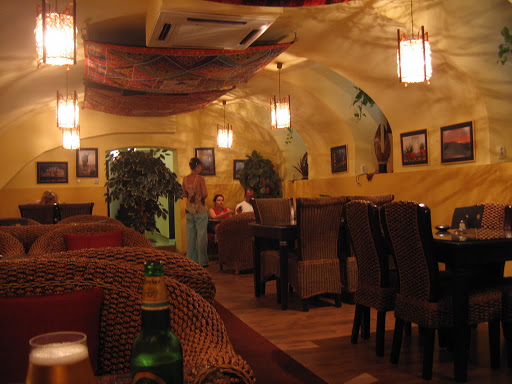 As an indication of how impressed I was with this restaurant, I'll tell you that of the eight nights I spent in Budapest, six involved dinner at Vegetarium (the others being the night I arrived and the conference dinner). It was excellent - a large, varied menu (full of vegan options for those that are interested), good prices, friendly (if slightly slapdash) service and really, really good food. The star of the show was definitely the Burgonyalángos gombapaprikással töltve (potato pancakes with paprika mushrooms) - a slightly spicy creamy mushroom dish served on top of a dense and delicious potato pancake. Simply outstanding (again, as an indication, I had it three of the six nights). Unfortunately, the lighting wasn't particularly conducive to photography, so the pictures don't do the food justice. 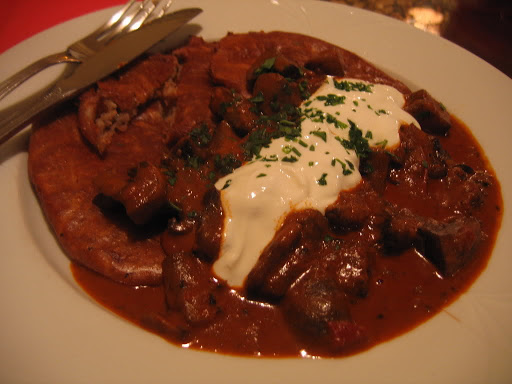 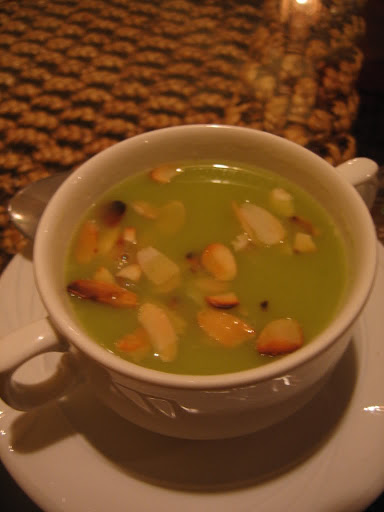 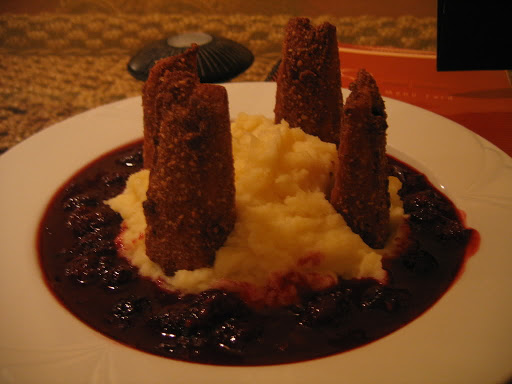 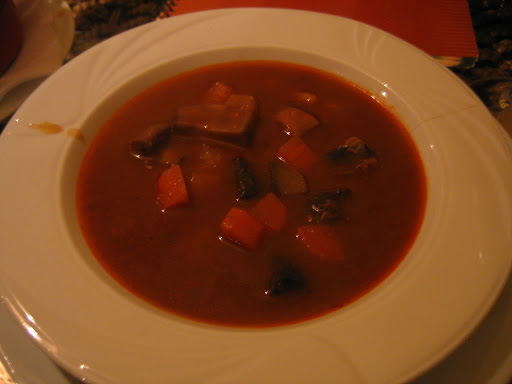 I ate a few other dishes as well (a hearty 'country-style' Hungarian dish filled with potatoes, mushrooms and paprika was particularly memorable), but haven't mustered up the courage to pull the camera out with workmates and international colleagues present. Across the various visits, we brought a decent number of conferencees along with us and everyone enjoyed the food - pizzas, salads, falafel, various stuffed pancakes, pasta - everything was demolished with great enthusiasm. If anyone reading this is ever in Budapest, I'd strongly recommend a visit - whether you're vegetarian or not.

My other meals in Budapest were generally less exciting - breakfast at the hotel was included in the price of the room, so I didn't sample traditional Magyar brekkies, and lunch (when I hadn't stuffed myself at the breakfast buffet) usually involved a quick trip over to the Great Market Hall. 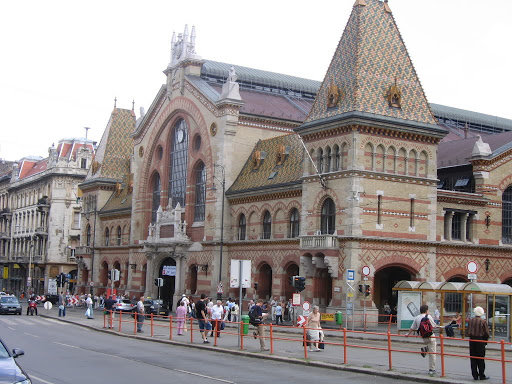 Once you dodge past the sausage stands and butchers at the front of the hall, the market is filled with cheap fruit and vegie shops, bakeries, some delis and spice shops and a few eating (and drinking - seriously, there's a good reason our alcohol policy research conference was held in Budapest, there's a whole lot of drinking going on) establishments. 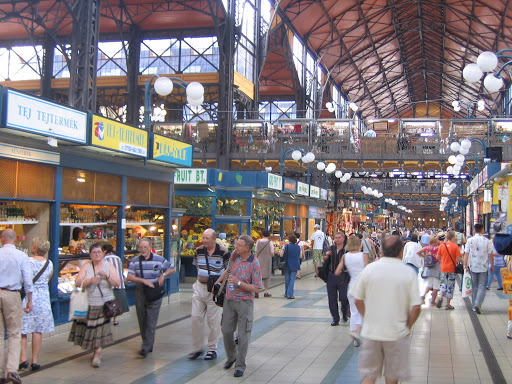 I was particularly fond of the strudel stand, which sold about fifteen different types of strudel (for about $1 each). Pictured below is a typical lunch: pumpkin and poppyseed strudel followed by apple and sour cherry strudel for dessert. 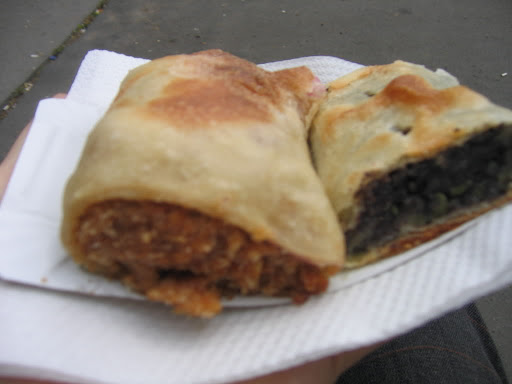 Vienna
After the conference wound down I jumped on board the hydrofoil that runs up the Danube to Vienna for a few extra days of sight-seeing without any work-related distractions. The central part of Vienna feels more like an open-air museum than a city that people live and work in - around every corner is a castle or museum built when the Hapsburg's ruled large chunks of Europe and had more gold than they knew what to do with. It's all very grand, and I've got more photos than anybody would really be interested in. A few highlights:

The view from the south tower of Stephensdom (St Stephen's Cathedral - not the Hungarian king) - it's a pretty good view, but climbing the 350 narrow, curving stairs on a humid 30 degree day left me in a pretty poor state to enjoy it. The Cathedral itself is quite impressive - it dates from the 1300s and is stuffed with ancient Christian artworks (and tourists). 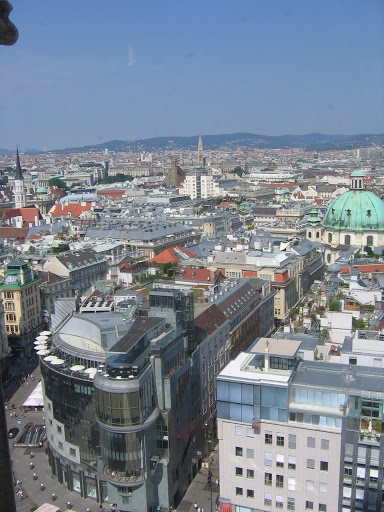 Kunsthistorisches Museum (Museum of Art History) - one of countless art museums in Vienna and, supposedly, second only to the Louvre in terms of its collection. I didn't actually make it inside - I'd exhausted my art gallery enthusiasm with a few hours checking out the Klimts and Schieles at the Leopold Museum. 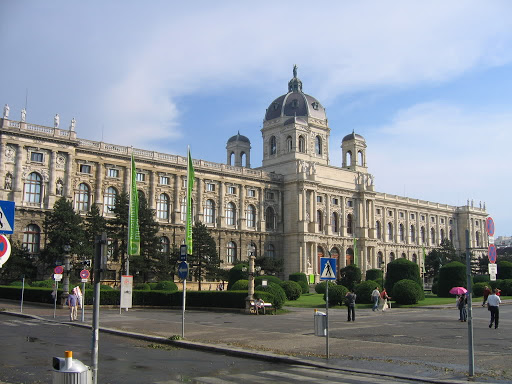 The Secession building - the gallery created by a group of Viennese artists (led by Klimt) who quit the main artists association in Vienna as a protest against its conservatism. They designed this building as their exhibition building. 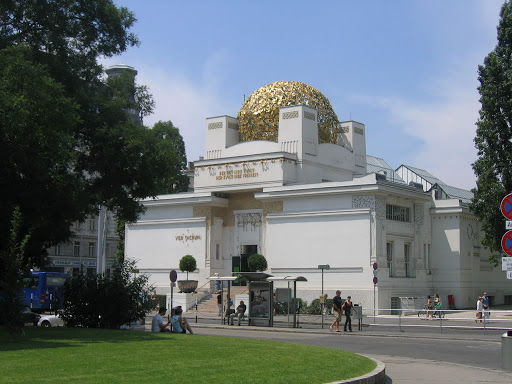 On to the food. The first thing that pops into my head when I think of Austrian food is sausage. Unfortunately, the vego sausage stand that the Lonely Planet guide promised me had gone out of business by the time I arrived, but luckily Antun's Biobar came through with the goods. The menu was substantial, with a range of soups, salads and mains (as well as organic beer and wine - although to be honest, the organic beer didn't really measure up to the regular stuff that I'd been drinking on my travels), and I selected a garlic vegetable soup and the country-appropriate sausage with dumplings and sauerkraut. Salty and delicious. 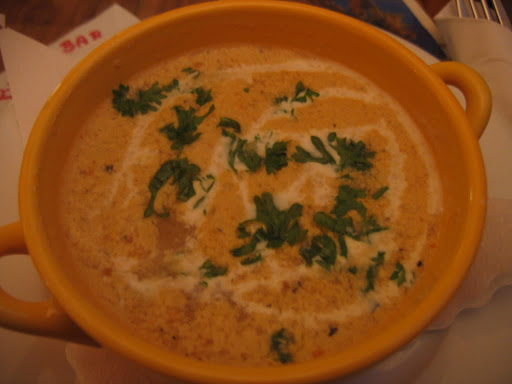 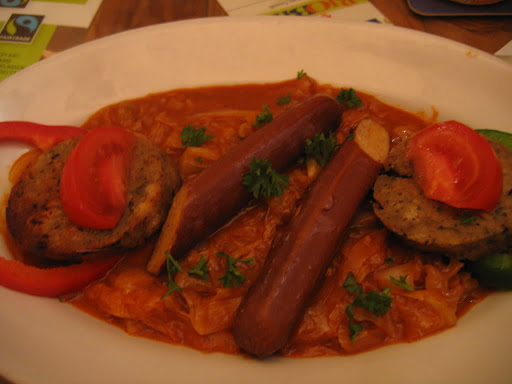 Having had my fill of traditional Austrian food, I hunted down a falafel place (Maschu Maschu) for lunch the next day. I had a falafel plate - six falafel balls, amazing hummus, three types of cabbage and some sort of pickled vegie sauce. Sitting out in the sun munching on this and watching the people go by... sigh, not what I need to think about while the Melbourne winter rain rolls in. 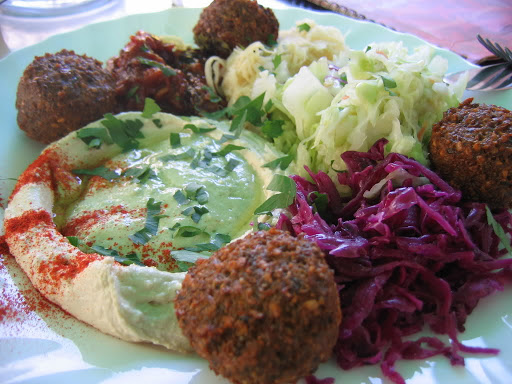 In the evening I hunted down Wrenkh, another Lonely Planet recommendation, which promised classy vegetarian dining. It was a classy enough place, but the menu had been infiltrated by a few fish and chicken dishes. Still, my red pepper and mango quinoa with fried cheese was pretty impressive. 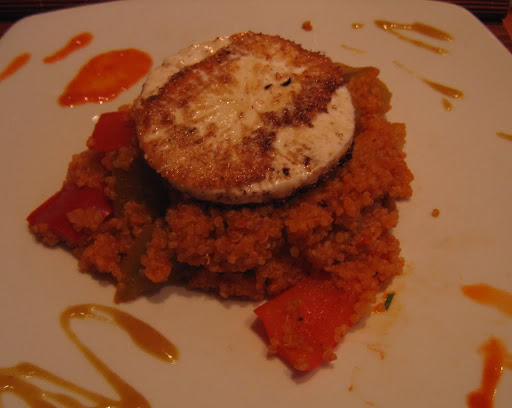 Some other treats: the world famous Sacher Torte served up at its traditional home, Hotel Sacher, along with a 'melange', the standard Viennese coffee: 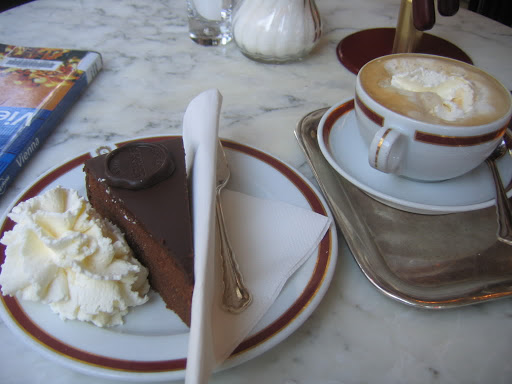 A lunch from the Naschmarkt, stuffed peppers and artichoke hearts, followed by an apple strudel. 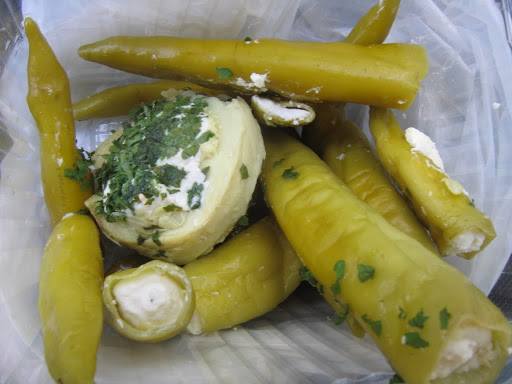 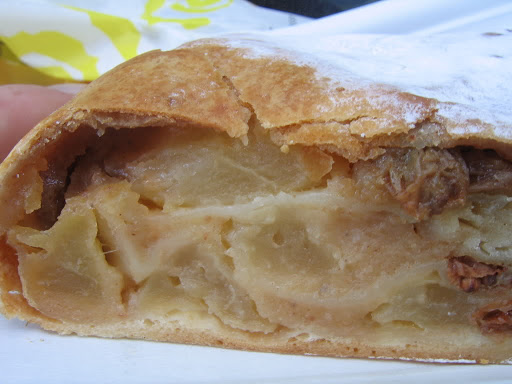 Amsterdam
The vagaries of connecting flights meant that I had a choice of a 6 or 27 hour layover in Amsterdam. It seemed sensible to take the longer stop off and actually spend some time in the city, rather than just hanging around Schiphol. With its multiple canals and gorgeous old canal houses, it's a very pleasant city just to stroll around for a day (until you stumble into the red-light district and scantily clad women start tapping on their windows for your attention). I skipped the Van Gogh and Rembrandt museums, preferring to enjoy the sunshine and to soak up the atmosphere. 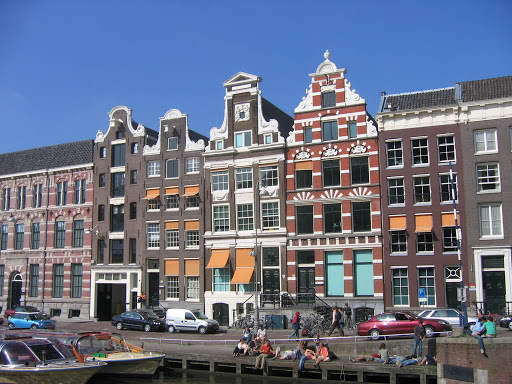 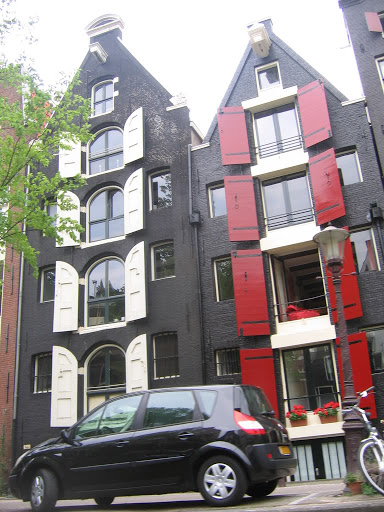 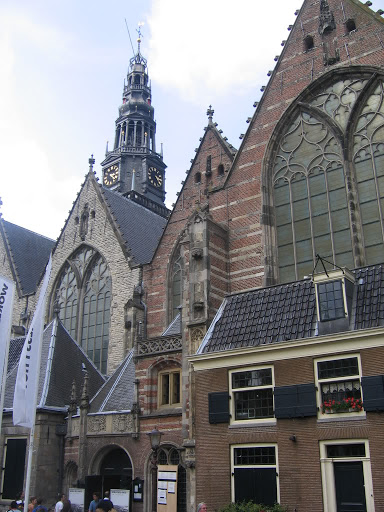 In Cindy's honour, I enjoyed a traditional Dutch snack: chips and mayo. 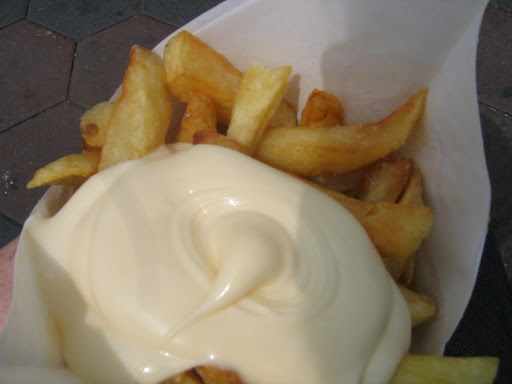 For dinner, I chased down another specialist vegetarian restaurant: Green Planet, near the Singel Canal on the western side of the inner city. It was a small place, with a small menu, and I opted for pumpkin and coriander soup, followed by the special of the day, Aloo Gobi served with rice and a green salad. Both were great - particularly the soup - but it was as much the outdoor table and parade of cyclists meandering past as the food that made it such a pleasant meal. 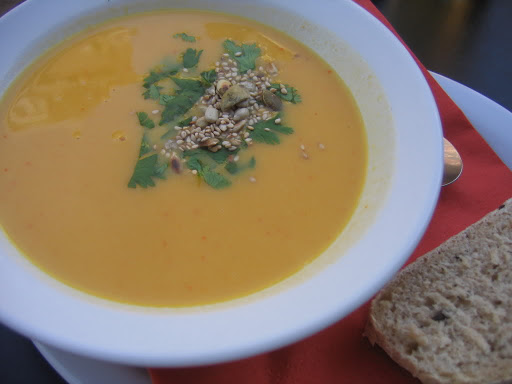 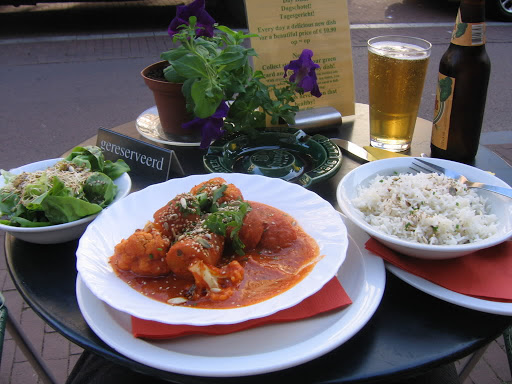 So, all in all, it was a very enjoyable trip - a good conference, three new cities to explore and lots of wonderful food to enjoy. And summer - it was quite a shock to come back to Melbourne and find that winter had finally arrived properly. Still, it's nice to go out and be able to make sense of the menu again and to have delicious home-cooked treats after two weeks of eating out every meal.
Posted by Michael at 3:52 pm