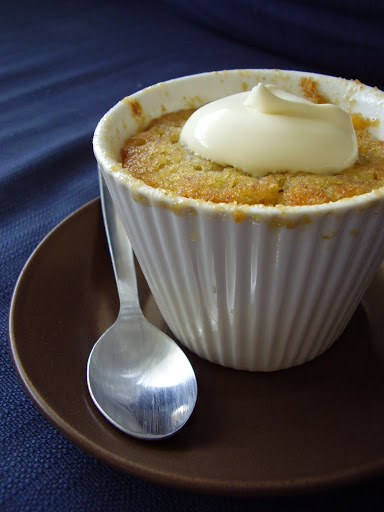 After a girls' night out on Friday, I made Saturday more of a girl's night in with some comfort food and Iron Chef on the menu. I have been saving this recipe up ever since Adski posted it in March, in anticipation of these couple of weeks that Michael would be away. As has been mentioned before, Michael harbours an extreme hatred of bananas and I could only really enjoy a sticky banana pudding to its fullest in his absence (and preferably in a single-serve cup while wrapped in a doona). While a recipe for honeycomb ice-cream is included in Adski's post, I decided to take the more restrained garnish of a dollop of cream, leftover from the butterscotch sauce. Boy, am I glad I did! The cake has the fairly sweet taste you'd expect a banana to give but the butterscotch sauce: holy cow! The substantial layer in the bottom of my cup was like thick, molten sugar. (Not surprising when you look at its component ingredients, I guess.) I can't imagine the sugar overload I would have subjected myself to if I'd added honeycomb to the mix. Since I was baking for one, I halved the recipe and made three cups of pudding to ration out during the week. You could tip these over onto a plate as Adski did for a pretty look and immediate access to the butterscotch sauce - however I found it more comforting to hold the cup in my hand and scoop straight from there.

I won't reprint the recipe because not only does Adski have it, but he's also included some instructive photos of the preparation. To try it yourself, head on over to Totally Addicted to Taste! 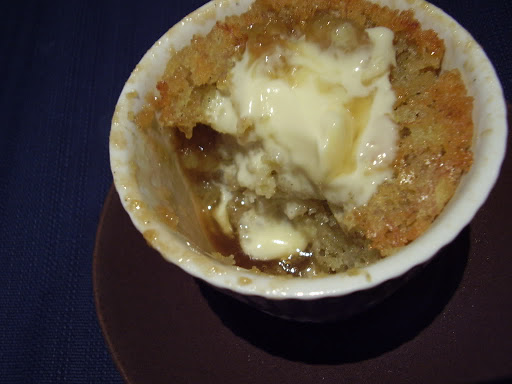