January 2016: The Crimean has closed and been replaced by Bobbie Peels. 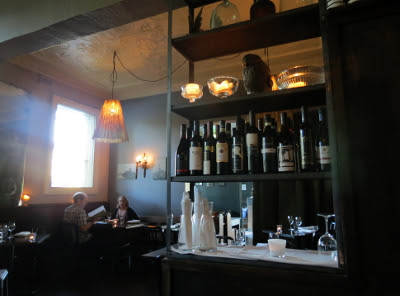 We've been trying to arrange a meal at The Crimean for ages, but our pub-club has grown to a regular group of more than 15 people, and we weren't sure how well it would cope with such an onslaught. We weren't even really sure that it was a pub. So a small group of us headed in on a Sunday night to suss it out. The front bar area is pretty small, and the whole vibe is probably a bit more formal than we're looking for in a pub, but once we altered our expectations we were pretty impressed with the fit-out. The restaurant area is dark and moody, teetering just the casual side of fine-dining.

The menu is broadly Eastern European, and is thus not super focussed on vegetarian options - vegans will be limited to sides and the plainest of salads, although they're pretty conscientious about gluten-free diners. There are two kinds of dumplings, a couple of salads, a big filo pastry and some sides. The menu is broken into small plates and large plates and the staff are pretty insistent that you share the small plates. With our mix of vegetarian and gluten-free diners we ignored their advice and just ordered for ourselves. Before the food we ordered started coming out, we were served up some fantastic bread rolls and a complementary starter, a chilled cucumber soup. 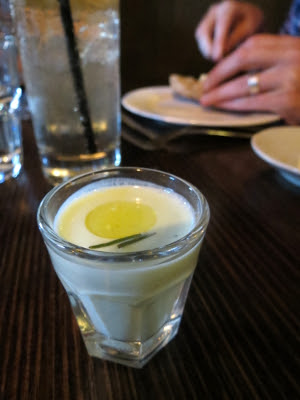 There's an impressive drinks menu as well, providing a range of unusual European wines, imported and local beers and a massive, vodka-heavy spirits list. I was following Cindy's lead and going booze-free for the evening, partly inspired by the blackboard promising more than fifty varieties of lemon lime and bitters. It turns out that was kind of a joke, but The Crimean do have an assortment of bitters, which we happily sampled (all based on vague suggestions from staff - the non alcoholic options didn't seem to be written down anywhere). 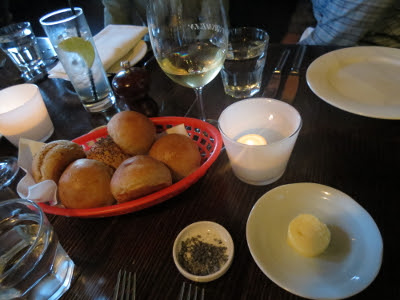 Onto the food! The main reason I'd been interested in visiting The Crimean was the promise of dumplings - they have two vegetarian options, the piroshki (baked red cabbage and mushroom with sour cream, $10) and the vareniki (potato and quark with roast onion puree, rye crumb and orange zest, $12). 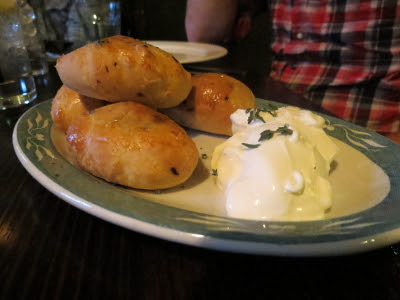 The piroshki were a surprise - they had a crispy shell (almost like little bread rolls) rather than the pierogi-style I was expecting. The filling was okay but not particularly distinctive, and they needed a good slathering in the generous dollop of sour cream that came on the side. 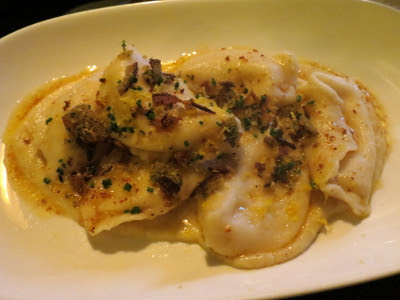 The vareniki were exactly what I was after though - soft dumplings stuffed with carbs and dairy and lightly flavoured with the roast onoin and orange zest. I'd order two batches of these next time.

Our main dish of the night was the banitsa, a Balkan filo pie of zucchini, feta and dill, smoked tomato and honey sauce and lamb's lettuce ($25). 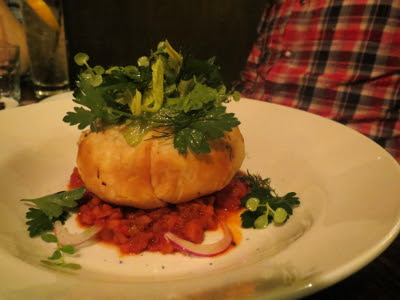 I was pretty happy with this - the pastry was great, the smoky/sweet tomato sauce pretty well done and the filling delicious. Still, though, it's a feta/spinach filo, and it's $25. It's a bit hard to get past that.

We ordered the fried cauliflower with capers, parsley and sharena sol (a combo of salt, paprika and savoury) on the side ($12). This was probably my favourite dish - the tender fried cauli pieces had absorbed lots of the spice mix and really hit the spot. 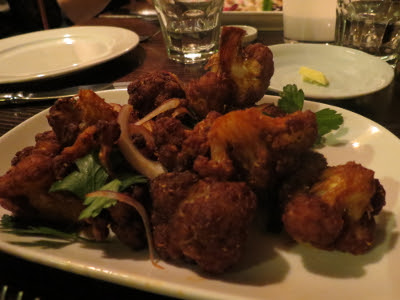 While I'd been lured in by the dumplings, Cindy had been eying off the dessert menu on The Crimean's website. After weighing up peach and almond pudding or an excellent-sounding chocolate/apricot concoction, we eventually decided to split the Polish cheesecake with orange caramel and pink grapefruit sorbet ($13). 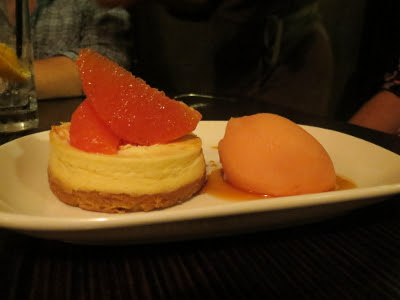 The grapefruit sorbet was very grapefruity - maybe a little too bitter for me - while the cheesecake was much sweeter. We had high hopes for this, but the combo didn't really do it for either of us. Should have stuck with something involving chocolate.

Our experience of The Crimean was okay - the service was friendly and reasonably efficient (although a bit weirdly pushy about things like sharing the entrees), the atmosphere lovely and the food pretty solid. It might have been a victim of my high expectations though, because I couldn't help but feel a bit disappointed - none of the dishes really blew my mind, and I ended the meal more excited about a revisit to Borsh, Vodka and Tears than about returning to The Crimean.


There are largely positive opinions of The Crimean on other blogs - check out lunchosaurus, Foodie About Town, Barley Blog, a bit of butter, The Melbourne Food Experience, Superéthique and Cork Talk.

Accessibility:There's a small step up as you enter the building, but things are flat and fairly well spread out inside. The lighting is moody and dim. There's full table service. We didn't visit the toilets.
Posted by Michael at 8:33 am