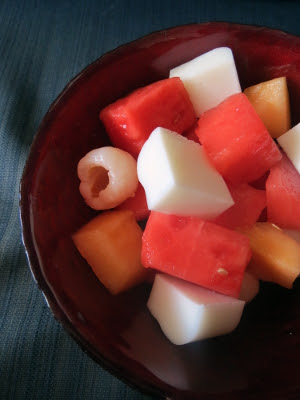 Steph invited us over to share some of her favourite customs and foods for Lunar New Year. To a heaving table of delicious things, I contributed this fruit salad. I was inspired by this recipe at taste, but with cows' milk and gelatine involved, I clearly needed to rework it for a veg*n crowd. Evaporated milk and almond essence didn't appeal to me half as much as almond milk anyway.


Agar agar was the obvious gelatine substitute, but I don't have a great history with it. I figured I'd give it a go a few days in advance, using these quantities as a guide, allowing myself time to trial a second batch and/or veganise Sarah's peanut cookies if it didn't work out. Lucky me, my agar almond jelly set perfectly, and was even firm enough to slice into cubes. Lucky twice over, our vege box contained a rockmelon that Michael and I would have struggled to eat any other week.


With the jelly set, it's just a matter of chopping everything up to match the size of the lychees, and gently tossing these bite-sized bits together with some canned lychee syrup for dressing. As the fruit salad settled, the watermelon released a lot of liquid and it was all very thoroughly dressed, indeed. It's a dessert for the height of summer - very juicy and sweet, with just a little textural contrast from the jelly. Personally, I'd enjoy it with a bit more bite and would sneak in some lime juice, Cointreau or Frangelico in future.


In a large saucepan, stir together the agar agar, almond milk and sugar. Bring them to the boil, then allow them to simmer for 3 minutes, stirring constantly. Pour the jelly into square container and refrigerate it until set, ideally overnight.


Drain the lychees into a large serving bowl and reserve their syrup. Peel then dice the rockmelon and watermelon, to match the size of the lychees, and add them to the bowl. Gently slice the jelly into cubes of matching size and add them too. Pour over half the lychee syrup and the Frangelico, if using. Gently, gently toss the salad and serve cold.
Posted by Cindy at 7:49 am