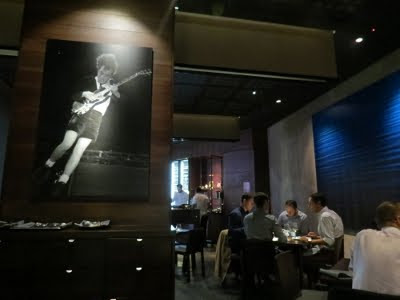 Michael was pretty keen to eat somewhere fancy in Sydney, and I couldn't think of anything fancier than David Chang's Momofuku Seiobo. I was less attracted by the big name and more by praise for the venue's vegetarian options on The Unbearable Lightness of Being Hungry - it was Lee's favourite meal of 2011. Attraction is one thing; getting a reservation is more about dedication and precision timing. Tables open up on the website at 10:00am, ten days in advance of the meal. On my first attempt I logged in, wavered a few too many seconds over the seating, and was bumped off. It was over in 40 seconds. Twenty-three hours, fifty-nine minutes and 20 seconds later I clicked indiscriminately, halved my time on site and secured our table. Phew.


From there I faced strict email instructions, a friendlier confirmation phone call and a slightly nervous journey to the venue, with the threat of losing my table and $350 off my credit card the potential consequence of running late. Our reward for arriving a few minutes early was extra time with the drinks list before the show began. I was delighted to discover more than one meal-matching option: in addition to the standard procession of wines ($95pp) there's a reduced pairing ($60pp) and a non-alcoholic pairing of vegetable and fruit juices ($55pp). Awfully nice of 'em to consider us cheap drunks and tee-totallers.

Food-wise, you'll take what you're given and pay $175pp for the pleasure. Momofuku do cater for special dietary requirements, just so long as they're spelled out in the initial reservation and confirmed by phone. Besides a few hints on Lee's blog, I really didn't know what to expect. That morning at Apt I'd flicked through a copy of Chang's book and found almost nothing, even amongst the desserts, that didn't include animal flesh or fat. 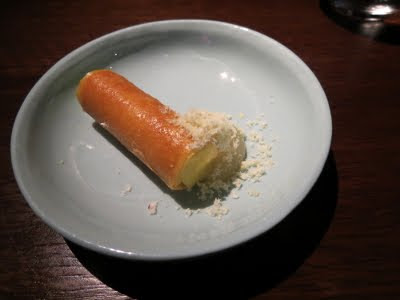 Food arrived promptly and frequently. We began with smoked potato piped into a buttery pastry tube, served with a sweet green apple gel and powdered, freeze-dried apple. Michael sipped sake, while I sampled an apple and fennel juice. 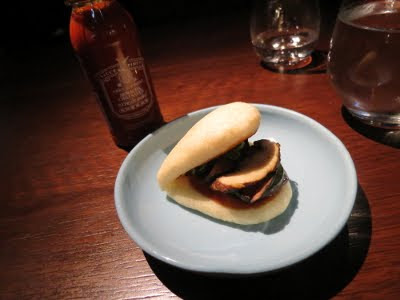 Steamed shiitake mushroom buns with sriracha sauce were an excellent consolation prize for those of us disqualified from Chang's famous pork buns. 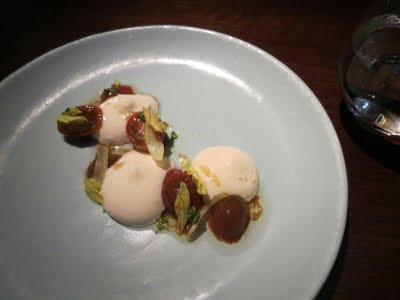 With a Riesling for Michael and a red currant juice for me, we picked over tomatoes, tofu and yuzu koshu foam. Though they'd only been very subtly cooked, Michael declared these to be "the kind of tomatoes he likes". 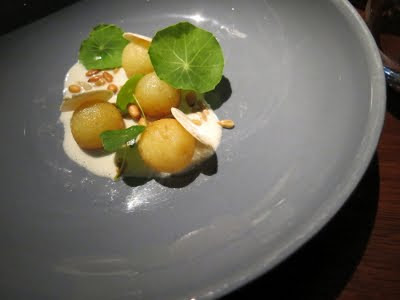 Confit potatoes were firm but tender, and crusty on the outside; served in a small pool of buttermilk with roasted nuts and seeds. 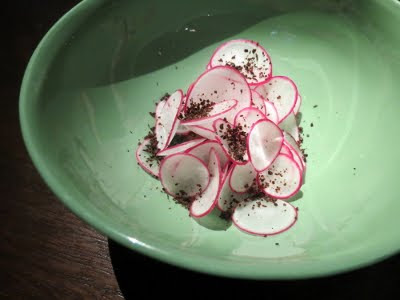 From here things took a turn for the pink. With a rosé and watermelon juice in hand, we picked at these petal-like radishes and found tiny watermelon cubes, dirtied up with fermented black beans and burnt oil.

One of the chefs popped over to our table with an open cast-iron pot containing a huge golden orb of roasted cauliflower. "Cauliflower says hi!", he greeted us. Beats picking one's own lobster from the tank. 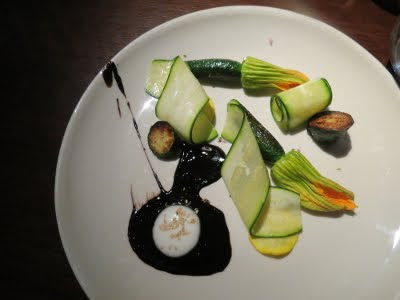 The zucchini done 'many ways' just barely outdid Ethos' three, thanks to black garlic (like oyster sauce!) and sesame yoghurt. 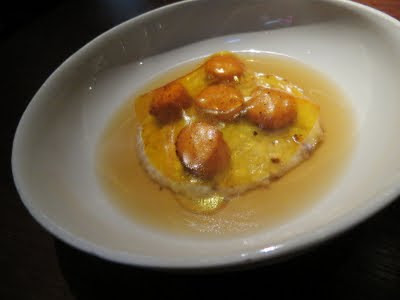 Next came Chenin blanc, carrot juice, and my favourite dish of the night - a disc of shiitake congee in a shiitake dashi topped with deep-fried doughnut dots and a thick film of preserved egg yolk. So savoury, so rich. 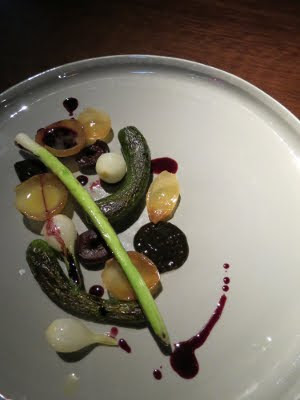 My orange and blackberry juice held its own against this plate of grilled onions and cucumber with red wine and pickled cherries. Though I love the way that roasting tames onions, the slippery things require quite some chasing around my plate. 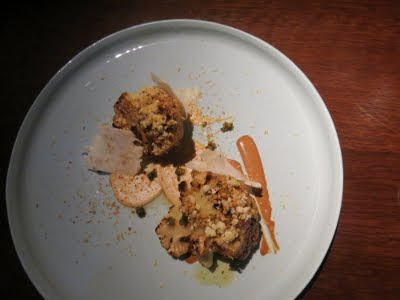 Our cauliflower returned in more manageable chunks, served with deep-fried capers, mustard seeds and hazelnuts. I washed it down with beetroot juice. 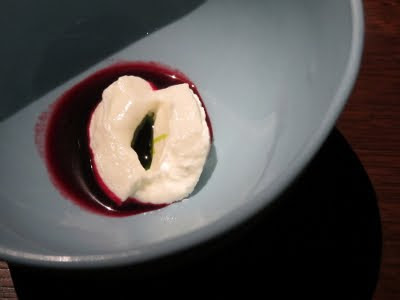 The cheese bridging savoury and sweet was a loop of soft, grassy goat curd with a moat of black currant juice and mint oil in the middle. 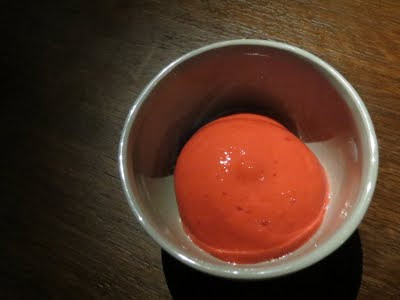 Cucumber and raspberry were delicately balanced as sweet and sour in my juice and in this dessert - the sweetened cucumber sorbet surrounded by raspberry foam. The accompanying elderflower yoghurt passed me by. 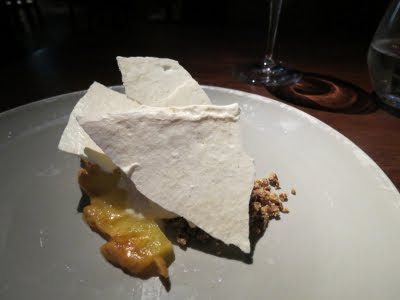 Roasting spectacularly caramelised some white chocolate crumbs - these were served with a wedge of browned pineapple and lip-puckering sheets of lime meringue in a display that reminded me of the Opera House.

Our meal finished with the bill and copies of the menu. No tea, coffee or petit fours here (for us non-pork-eaters, anyway) - Momofuku play it their way. There's a real sense throughout that they're running the show precisely to their schedule and there's not much room for lingering or extended socialising or even for eating as slowly as I do. Our twelve courses were finished and we were out the door in two and a quarter hours; we've had lesser degustations spread across four!


Nevertheless, Momofuku was completely accommodating of our vegetarianism. The staff were uniformly young and energetic (I'm not sure any of them had seen their 30th birthday yet) and entirely capable, backed by an attention-grabbing soundtrack of dad-rock, bro-rock, alt-rock and hip hop. This meal rates in our two most expensive and most enjoyed degustations alongside Attica.


Accessibility: Entry to the restaurant is flat and the tables are widely spaced inside. Lighting is focussed at the centre of the tables and music is moderately loud. Passage to the unisex toilet is flat but fraught, requiring a trip through the kitchen (a trip bypassing the kitchen might be possible with staff assistance). The cubicle is somewhat large with a heavy door.
Posted by Cindy at 9:41 am