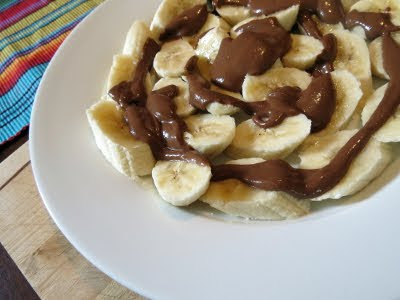 After getting in a tizz about well-composed fruit salads, I dreamed this one up to share with friends as breakfast-dessert when they invited us over for breakfast-proper. I felt a little cruel to be making things with bananas when Michael hates them so much, but I was just using up three of the four that turned up in our vege box. I'm pretty sure I was doing him a favour by outsourcing some of the eating, right?


Bananas are well known to work with Nutella, and I like eating them with peanut butter too. It wasn't too big a stretch, then, to imagine they'd work with the chocolate tahini I recently ate at New Day Rising. I didn't chase down the jarred stuff they buy, though - I just whisked some cocoa and maple syrup into tahini, thinned it out and we were good to go. The bitterness of the tahini asserted itself nicely against the banana, instead of just reinforcing the sweetness as Nutella would. This dressing is a prime candidate for flavouring smoothies, dolloping on toast or pancakes or waffles, and stirring into ice cream too.


Whisk all the ingredients together, adjust the flavour balance to taste, and gradually stir in drops of water to achieve the consistency you desire.
Posted by Cindy at 9:24 am