22/02/2013: We're very sad to report that South has closed suddenly today. They were immensely popular and we're looking forward to what these folks do next. 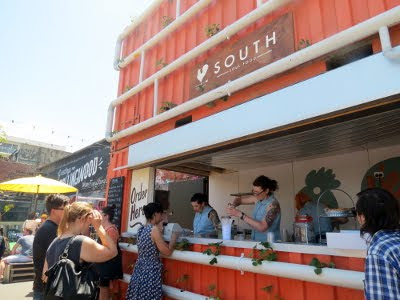 When the peeps behind The Mercy Seat reactivated their Facebook account and promised "something exciting" for summer, veg*ns around Melbourne started paying attention. And then they announced South, co-run by an alum of the Gasometer kitchen, and promised an all-vegan menu filled with "the smokey, sticky barbeque flavour of Texas, Memphis and New Orleans" and the anticipation went into overdrive.

South is part of The People's Market, a new venture being run over summer in a Collingwood carpark - there are art spaces, hipster-oriented stalls, live music, booze and food. And a ping-pong table. We checked it out on Friday night (their 'secret' soft opening) and then on the Saturday, when the sun was shining and every skinny-jeaned/op-shop dressed twenty-something in the inner-north was there. 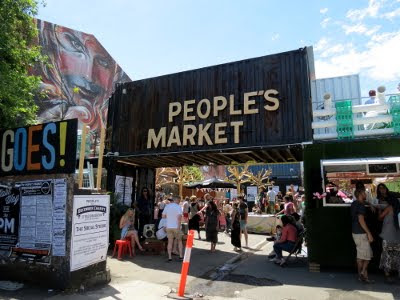 The market is worth checking out - there's lots of great food (Phat Brats has a stall, there's a fancy coffee place, Movida bakery and a bao place that has a couple of vegan options), a bar that sells booze plus ice-cream (including vegan options!) and a bunch of other stuff. Neither of us were that excited by the market offerings but the food, drink and atmosphere hit the spot nicely. 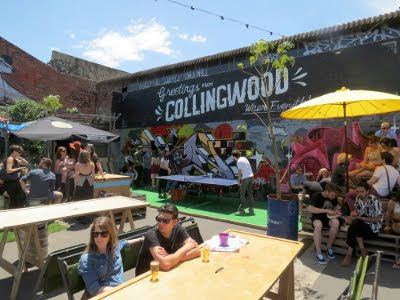 But we were there for South. On the Friday evening we caught them while they were still setting up (I think the 'secret' opening had been sprung on them a bit late) but they told us if we waited around for a while they'd have some gumbo ready. So we did. 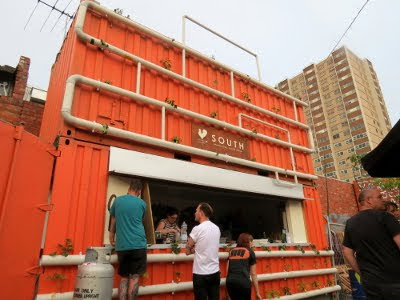 The gumbo ($12) has a rich, spicy flavour, with a slick of chilli oil on top to coat everything. The filling was a fun mix of veggies, a chunk of corn cob, sausages and faux-shrimp. We both were too excited to eat it, and scoffed it down while it was still super hot, which wasn't the smartest move (although the watermelon on the side helped soothe our pain). It was pretty damn impressive, although I was pining for a couple of slices of corn bread for dunking. 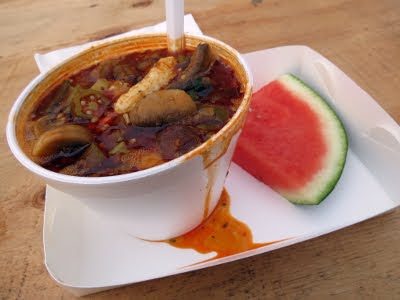 Having had a taste on Friday, we were ready to tackle the full menu for lunch on Saturday. The laid-back Friday evening vibe was gone, replaced by hordes of excitable vegans queuing for Southern treats. The menu will vary from day to day, but the basic range is pretty freaking exciting. Coeliacs note: there are gf-adaptable dishes on the menu each day. The lobster roll could definitely be done GF - check their facebook page for up to date menu info. 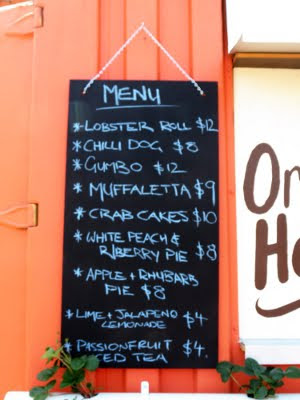 We decided to go all seafoody, splitting a lobster roll ($12) and some crab cakes ($10). The lobster roll was a soft white chunk of bread, stuffed with faux-lobster, lettuce and vegan cheese and drowned in delicious herby mayo. There isn't really a strong seafood flavour coming through, but the warm mock-meat and slightly melty vegan cheese all dripping with mayo worked surprisingly well. 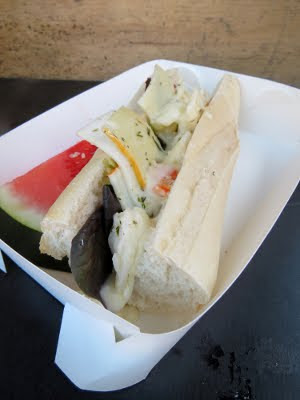 The crabcakes were even better- crispy fried little bundles of goodness, with a nice tartare-style dipping sauce - Cindy declared these the pick of the menu. 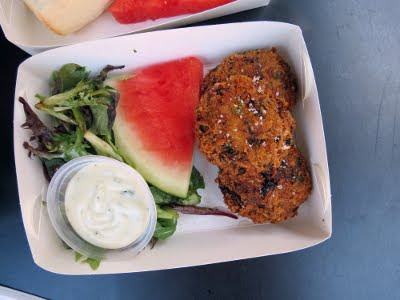 But I had other ideas. We'd tried ordering some pie when we reached the head of the queue, only to be told that they were still too hot and we'd have to wait. As we sat wondering when it would be dessert time, I hit upon the idea of having a chilli dog ($8) for dessert - who says dessert needs to be sweet anyway? Look how happy I am with myself: 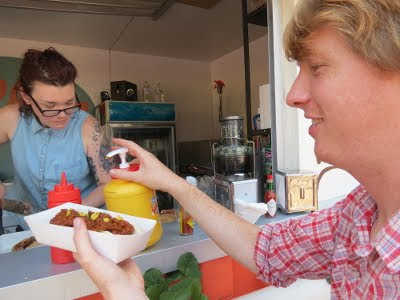 And this is why: 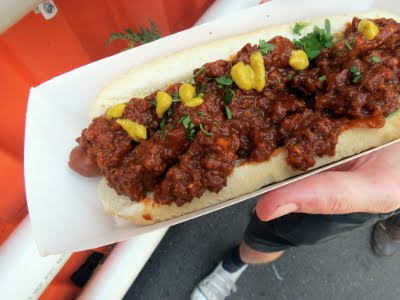 The best damn vegan chilli dog around. The chilli was tvp-based and managed to smoky, spicy and a bit sweet all at the same time. The dog and bun were fine, but this was all about the thick layer of wonderful chilli smeared on top. A highly recommended dessert treat.

Cindy did manage to get her hands on the white peach and raspberry pie, after convincing the charming staff to cut a slice while it was still too hot. They made her promise not to take any photos of it (it didn't really survive the slicing process) but what it lacked in structural integrity, it made up for in sweet and fruity goodness. The side of vegan soyghurt was pretty special as well.

South have clearly tapped into something popular - they were completely swamped on the Saturday and had sold out of everything by mid-afternoon. I'm sitting at home having visited twice in two days and enviously eyeing off the catfish po' boys and buffalo wings that Carla is discussing on twitter. I foresee long queues and many satisfied customers. The staff are lovely - chatty and helpful, making sure we got our early gumbo and serving us up pie even though they had reservations. South are going to be huge - pick a sunny day (although make sure it's between Thursday and Sunday, when things are open!) and go check them out. They're only around over summer, although I wouldn't be surprised if they end up finding a shop-front once the market is over.
____________


We were sure we'd be the first bloggers to get something up about South, but we've been well and truly trumped. The Good Hearted have a full review of South up already, while Fitzroyalty, Vetti and Peet have all written up The People's Market experience.
____________

Accessibility: The markets themselves seemed relatively accessible to me, although everything was impossibly crowded with people on the Saturday. Ordering and payment at South is at a pretty high counter, and there's no guarantee you'll be able to find a table to eat at. We didn't go looking for the toilets.
Posted by Michael at 1:03 pm