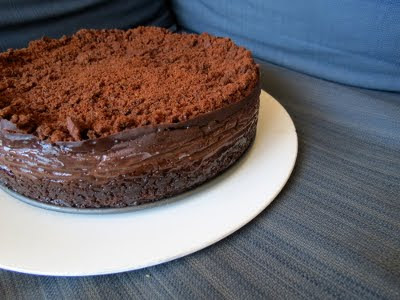 While Michael made a big break from family Christmas tradition, my family has been honing some off-beat traditions of their own. My mum and her sister typically develop a TV series obsession (this year we weaned them from Mad Men with Homeland), there is abundant wine and cheese and chips and less emphasis on the main meal. In fact, this year sufficient wine and cheese and chips were had that we deferred the main meal to dinner time and skipped straight from hors d'oeuvres to dessert.


For dessert I utilised a very large tub of vegan cream cheese I recently inherited from a friend and an excellent recipe for black forest cheezecake developed by another friend. Not all of my family love black forest flavours as much as I do, so I kept the berries on the side and sprinkled extra chocolate biscuit crumbs on top. The filling was thick and buttery and needed a lot of cajoling to form a smooth flat cake and though I worried over its wobbliness during baking, it set firmly and densely overnight in the fridge.


It was every bit the (five-person) crowd-pleaser I'd hoped for. While a couple of people ate it with berries as intended, another preferred it unadorned and yet another astutely pointed out that it'd be better spiked with liqueur and proceeded to douse mouthfuls variously with Kahlua, Frangelico and red wine.


It fueled us through some intensive afternoon napping, after which we ate Michael's heaven-sent haloumi and mango coconut rice salad in a park, drove down to St Kilda pier to watch the penguins come in for the night, and warmed up with B52s before bed. It's nice to think that we can do it all again (or not!) next year. 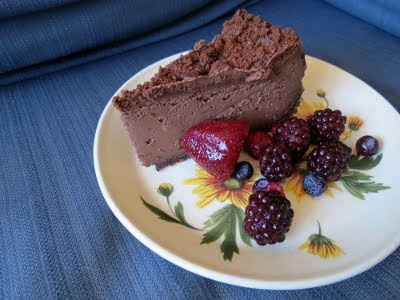 
Line a springform tin with paper. Crush the chocolate biscuits and set 1/2 cup of them aside for later. Melt the margarine and mix it through the main portion of crushed biscuits. Pour the crushed biscuits into the line tin and use your hands or the back of a spoon to press them into the base and a little way up the sides.


Preheat an oven to 175°C. Gently melt the chocolate and set it aside. Beat together the remaining filling ingredients in a bowl, then fold through the melted chocolate. Pour the filling over the crust, smoothing over the top with a knife or spatula. Cover the cheezecake with foil and bake it until set around the edges, about 50 minutes. Sprinkle over that 1/2 cup of biscuit crumbs you should still have lying around, and refrigerate the cheezecake overnight before slicing and serving.
Posted by Cindy at 8:21 am