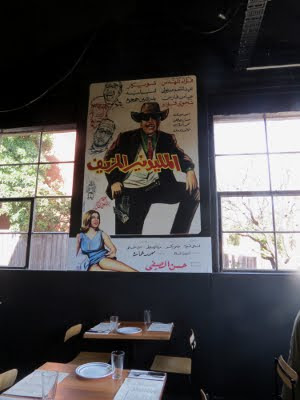 Women of Letters drew us back to Thornbury again in November, giving us the perfect excuse to revisit The Moor's Head to sample more of their menu. This time around we were joined by Cindy's aunt Carol, meaning we could safely order two pizzas without having to worry about carting leftovers back home with us.
We started with the Saladin (red za'atar, felfeleh (red pepper and pomegranate), labne, parsley, mint, walnuts, cumin and roquette, $16.50), as recommended to us by a commenter on our first review. 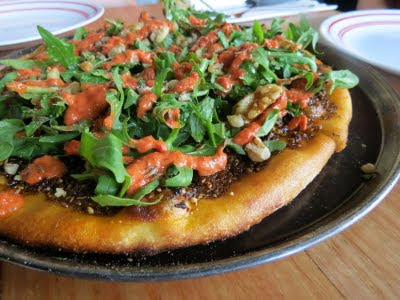 This was really top notch - the za'atar makes a fantastic base for a pizza, while the felfeleh (which we guessed was the orange sauce) was tangy and creamy. Throw some crunchy nuts (plus the beautiful base of course), and you've got a superb pizza - put this at the top of your ordering list on any future visits.
To accompany it, we ordered the Beiruti (za'atar, fresh tomato, olives, onion, labne and roquette, $16.50). 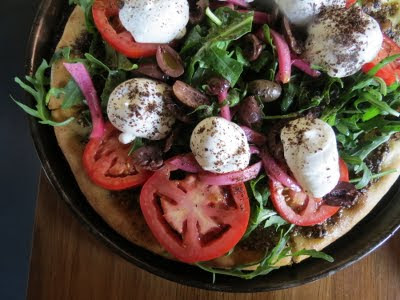 This was dominated by the big fat dollops of labne, which were messy but enjoyable. The whole thing was a bit like a fantastic Greek salad on a pizza - I especially enjoyed my slices stockpiled with all of Cindy's discarded olives. We were all a bit tired of the roquette though - especially because we'd chosen a roquette salad to break up the pizzas (with shanklish and dried Iranian raisins, $8). 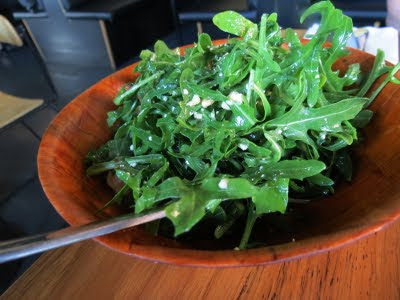 The bits of this where you got some shanklish and a raisin were great, but they were a bit thin on the ground for my greedy tastes.
Speaking of greedy, we were feeling brave enough to tackle a post-pizza dessert. Carol and I wanted coffees but The Moor's Head is strictly a tea-based hot beverage restaurant (which strikes me as bonkers, but anyway). Instead, we each grabbed a scoop of their coffee ice cream ($3.50), which more than made up for the lack of a latte. 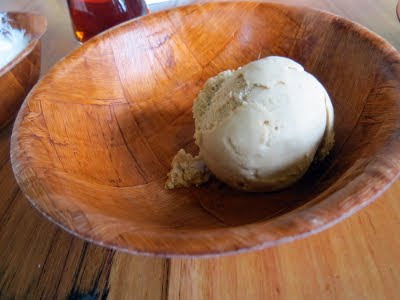 Cindy grabbed a sweet black tea to go along with a giant bowl of Persian fairy floss ($5). I was just telling her that I found the fairy floss a little bit lacking on its own, but she pointed out that I still managed to eat half of it, so I guess it was better than I remember. She certainly seemed to enjoy the bits that I didn't steal. 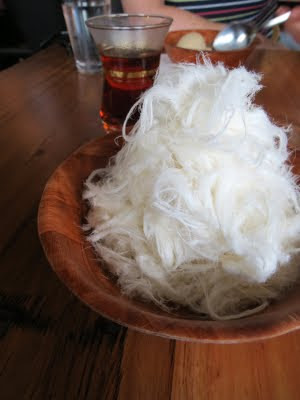 I think I enjoyed The Moor's Head even more on the second visit - we ordered a bit better (the Saladin in particular really won me over), and we found room for dessert. I can't recommend it enough - the staff are friendly, the meals are pretty affordable and everything we've eaten has been fantastic.
____________
Read about our previous visit to The Moor's Head here. Since then, there's just been one extra review (positive of course) - check out the grazing panda.
____________
The Moor's Head
774 High Street, Thornbury (it's actually a bit of the way down Collins Street)
9484 0173
starters/salads $4.50 - 8.50, veg pizzas $16.50 - 17.50
http://www.themoorshead.com/

Accessibility: The Moor's Head has done a good job in terms of accessibility - there's a ramp on entry, a reasonably spacious interior and a unisex, disability accessible bathroom. Ordering is at the table, payment at a low counter or at the table.
Posted by Michael at 10:14 am