All of a sudden Melbourne's gone mad for hot dogs - Grandstand and Walkers have been around for a while, but Snag Stand, Le Sausage and Massive Wieners are all new additions, and Lord of the Fries have recently joined the party (Broadsheet have a fancy snag rundown with a few other places I've never heard of). And now there's Phat Brats, recently opened in the premises of the old Kebab Factory. They're shooting for a similar up-market vibe as Snag Stand - all organic ingredients and fancy fillings. It's a big menu - about a dozen different combos, plus fries and trimmings. There are a a couple of veggie dogs (although neither are vegan or gluten free) and they're happy for you to sub the veggie sausages into any of the other flavour combos. We decided to try one of each and split a serve of the veggie chilli fries between us. 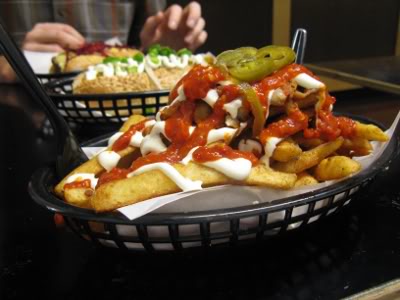 The chilli fries ($7) came out first - a bowl of perfectly crispy spuds, slathered in beans, chilli sauce, jalapenos and sour cream. The chips themselves were amazing - some of the best I've had - but the toppings were a bit on the hot side. Cindy was completely overpowered by the sauce and, while I could eat it, I thought it detracted a bit from the delciousness of the fries. Be warned. 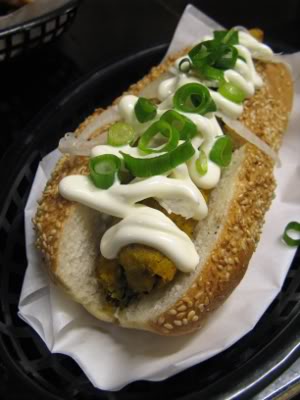 The first hot-dog was the pumpkin ricotta & tarragon veggie dog with mild mustard, shaved fennel, sour cream and spring onions ($8.50). This is no replication of a typical hot dog - the sausage itself was okay, but the whole package was a bit on the bland side.

The second dog made up for it though - a black bean, lentil & veggie dog with raw slaw, shredded beetroot, cheese sauce and green pickle relish ($8.50). 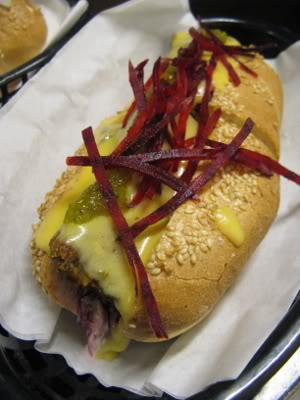 This was more like it  - the dog was hearty and flavourful and the toppings were an excellent combination of junky and delicious. Still, I reckon next time we go there I'll use this sausage to make a classic hot-dog - sometimes you just want mustard, onions, and tomato sauce rather than fancy relishes and grated beetroot.

Phat Brats does the gourmet hot dog pretty well, but its lack of vegan options and our generally low-class tastes mean that we're probably more likely to find ourselves across the road at LotF having one of their unashamedly straightforward dogs.
____________

Two Munch, Elle Bambi Diaries and Peach Water (sponsored) were fans, while Gourmet Chick tried them out at The People's Market and was a bit unenthused.

http://phatbrats.com.au/ (coming soon apparently - at this stage it doesn't even have the address/phone number on it)

Accessibility: Phat Brats has a step-free entryway and is pretty spacious inside. You order and pay at a middling counter. The toilets are on the same level and not too cramped.
Posted by Michael at 6:14 pm